Donald Kraybill on What The Amish Teach Us: Q&A and Book Giveaway (plus: Podcast #3) 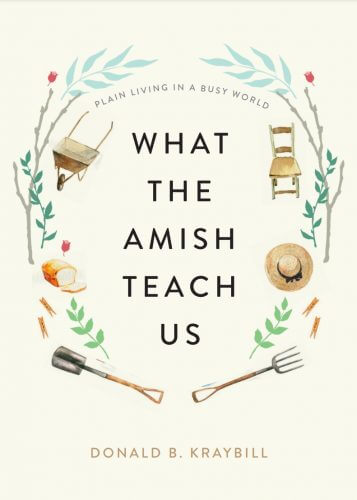 Donald Kraybill‘s new book What the Amish Teach Us: Plain Living in a Busy World will be out next Tuesday.

What the Amish Teach Us features 22 essays on a wide array of important life topics, each drawing lessons from the Amish example. Topics include “Limits: Less Choice, More Joy”, “Parenting: Raising Sturdy Children”, “Hacking: Creative Bypasses”, “Patience: Slow Down and Listen”, and many more.

In the lead up to book release day, I am happy to share this Q-and-A with Don today, covering not only lessons learned from the Amish, but his own reflections and experience with the Amish over the years.

Enter to win a copy of What The Amish Teach Us

We’ve also got a book giveaway courtesy of Johns Hopkins University Press. To enter to win a copy, simply leave a comment on this post. I’ll draw a winner at random, and announce it here in a separate post next Tuesday, October 26.

Q-&-A with Professor Donald Kraybill on the Amish

Amish America: Growing up and living in Lancaster County, who were the Amish to you?

Donald Kraybill: I grew up in a Mennonite family. We operated a dairy farm. We did not have any Amish farms in our area. We viewed them as old-fashioned, stuck in the mud, leftover relics of the nineteenth century and we scoffed at their horse and buggy ways. Even though Mennonites and Amish had similar religious roots in Europe we Mennonites didn’t really want to be identified with them in the mid-1950s when I was growing up. We really thought they would soon die out. Our prediction was aligned with some professors at universities like Yale who also forecasted the demise of Amish society.

Amish America: When did you first recognize or realize that you wanted to research and write about the Amish? How did that happen?

Donald Kraybill: I began teaching sociology at Elizabethtown College in 1971. I had little interest in Amish studies until 1984. Until then my research had focused on various Mennonite groups and Mennonite education.

The paramount Hollywood movie Witness was filmed in Lancaster County in 1984. It created a big stir within the Amish community. Daily features appeared in the Lancaster papers. People started asking me questions about the Amish which I couldn’t answer. For example, why do the Amish keep their tractors at the barn and never use them in the field. And why do they pull modern harvesting equipment in their field with horses. These practices seemed hypocritical and weird. But they stirred my interest.

So I began visiting with some Amish farmers and soon realized that some of these practices which looked odd to us from the outside made a lot of sense inside Amish culture. My first Amish-themed book, The Riddle of Amish Culture was published in 1989.

How many books have you written on the Amish, and which was your favorite to write (and why)?

I have authored, coauthored, or edited a dozen books on Amish life and culture. My favorite one is Amish Grace: How Forgiveness Transcended Tragedy (Co-authored with Steven M. Nolt and David L. Weaver-Zercher). This book tells the story of Charlie Roberts shooting ten young Amish girls at Nickel Mines (southern Lancaster County) in October 2006, and the subsequent forgiveness offered by the Amish community to Charlie’s (he took his own life) widow and family.

We decided to write a book in late October and I conducted about three dozen interviews in the fall. In late December we received a contract for the book. The three authors met one time face-to-face in late December. We taught at different colleges and Nolt lived in Indiana. We began writing in mid-January and completed the manuscript in ten weeks to meet our publisher’s April 1 deadline.

Looking back, it almost seems miraculous how the three of us working at different locations, and never meeting during the process, could complete the manuscript in ten weeks. Moreover, although different authors drafted different chapters, all of us read and revised all of the chapters. I still don’t know how we wrote it so fast. This is my favorite book because it was translated into four different languages, and touched the lives of thousands of people worldwide with a message of forgiveness.

What does this book cover and can you tell us about your approach to writing it?

This is a very different book than any of my other ones. It is not a broad sociological analysis of the strengths and weaknesses of Amish culture. Rather it’s a collection of twenty-two short essays (about a thousand words each). In each one I focus sharply on something that I’ve learned from the Amish. In other words, I show how certain Amish practices and values have shaped me.

I suggest throughout all the essays that many times the Amish are so far behind us, that they’re out ahead of us. Ironically, I think that, these horse-and-buggy-driving people have much to say to the rest of us in a hyper-everything world. Some of the essays deal with religious themes such as salvation and forgiveness. Others focus on technology and entrepreneurship. Still others zoom in on Amish practices such as limited choice, strong families, education, retirement, and dying. 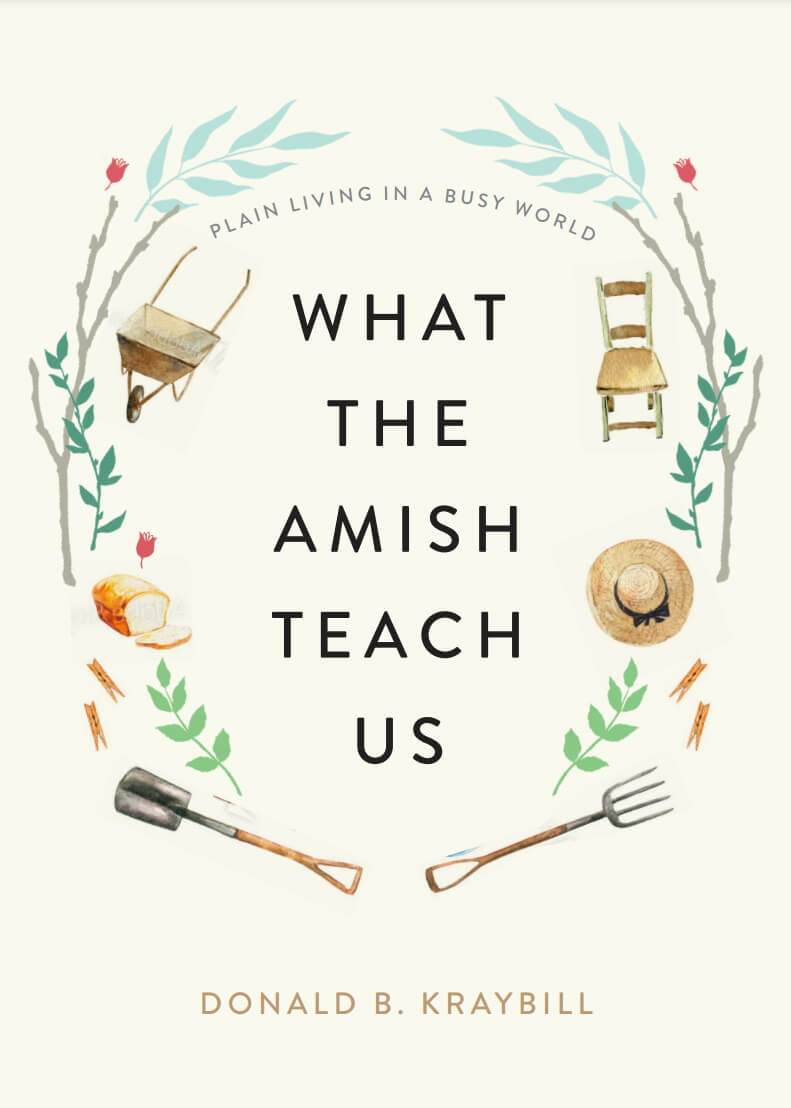 Are there any particular Amish people that stand out as having been “sources of wisdom”?

I learned to know a bishop in Ohio who took time over several visits to help me understand the deeper nuances of Amish faith and practice. A married woman in Pennsylvania has graciously hosted my students in her home, answered dozens of questions and read drafts of my several of my book manuscripts. One couple who lost a child at the Nickel Mines shooting has warmly welcomed me into their home over the years and given me a new and deeper appreciation for their spirituality. I have a special friendship with an Amish man who I observed go through several jobs and stages in his life. He’s the kind of person that I can ask any question without creating offense. We have a lot of fun and laughter teasing each other.

Can you give us an example of one or two lessons or concepts you cover in the book?

For many years in my research I couldn’t understand how Amish youth, eighth-grade graduates of one-room schools with no technology, could become savvy entrepreneurs operating sizable businesses that were profitable and successful. I realized one day the answer was: apprenticeship. It’d been staring it in the face for many years but I never was able to put the puzzle together. Between the ages of fourteen (when they leave school) and until they marry, Amish youth are engaged in various informal apprenticeships. Recently the Chronicle of Higher Education published several essays on the importance of apprenticeship. It’s an example of where the larger culture is finally catching up with the Amish.

Another quick example is retirement. The Amish practice, “aging in place,” which recently has become trendy for mainstream retirees because it enables one to stay in well-known social networks, bolsters mental health. Plus it’s usually much cheaper than moving into an upscale gated retirement community.

What aspect(s) of Amish life do you feel is most incongruent with or counter to the values of a modern 21st-century American society?

I think Amish humility collides with the modern emphasis on the self. The selfie generation captures the preoccupation of our me-me-me society. The biggest chasm between Amish society and American society is the cut between communalism and individualism. In modern life the individual comes first, followed by family, and then community. In Amish life, that order is flipped upside down. First is community-church, then family, and finally the individual. Even so, there’s space aplenty for individual preference and expression in Amish life.

What aspect do you feel would have the biggest positive impact if it were widely adopted or practiced in modern society?

Over the years of researching and writing about Amish society I have been intrigued with their emphasis on smallness. I have a chapter on small scale in the book. Early in my research I had a conversation with an Amish carpenter in his shop and I ask if he hopes to expand sometime. Absolutely not, he said. Why, I asked? His response: BIGNESS RUINS EVERYTHING.

I think that’s a powerful summary of the Amish commitment to keeping things small. In modern life we assume bigger is better. Think about the corporate monopolies, the growing infringement of government in all crevices of life. Bigger bigger bigger is the American mantra. Smallness, argue the Amish, keeps things humane.

Are there any particular aspects of Amish life that remain riddles to you today?

One of the riddles that I haven’t completely solved is seating practices in church services. Men and women sit on separate sides. This not a unique Amish thing. It happens in other conservative religious communities as well. Does it reflect patriarchy? When a group “modernizes”, families typically sit together. Given the strong emphasis on family, we might expect families to sit together in Amish congregations. Does separate seating suggest that gender is more important than family? Or that the individual sitting on a gendered side is responsible directly to God and not mediated through the family unit? Not sure about these things. Need to do more research and engage in conversations with other scholars.

Where can we find the book, and any other info?

What the Amish Teach Us: Plain Living in a Busy World is published by Johns Hopkins University Press in Baltimore. It’s available on their website as well as on Amazon and from booksellers everywhere.

You can also catch the latest in Don’s companion podcast, What I Learned From The Amish. We previously head Don and Amish friend Ben discuss the topics of Community and Technology. This week, they tackle Apprenticeship, which Don touches on above. Here’s a snippet:

How in the world, do Amish people, learn to run successful businesses? I’m talking businesses that rake in a million dollars a year or more. Thousands of these operations run every day in Amish communities across America. Amish entrepreneurs, never attend high school or college. None of them holds an MBA.

I had never seen a 3D printer before. There I stood, a college professor, in an old-fashioned lantern shop, staring at ten machines running on solar power that eighth-grade-educated Abner, had programmed to manufacture an invention. How did he ever learn to do this? It turns out, he was as an apprentice with a self-trained, Amish computer wizard.

Apprenticeship explains how a young woman learns to run a successful, gourmet popcorn business and how another woman manages a sizable green house, and on and on. No one assigns an apprentice to a mentor. But everyone—children, youth, adults—they all know the tradition. It just happens informally.

You can listen to the full episode here, as well as at Spotify, Amazon Music, and Apple Podcasts. 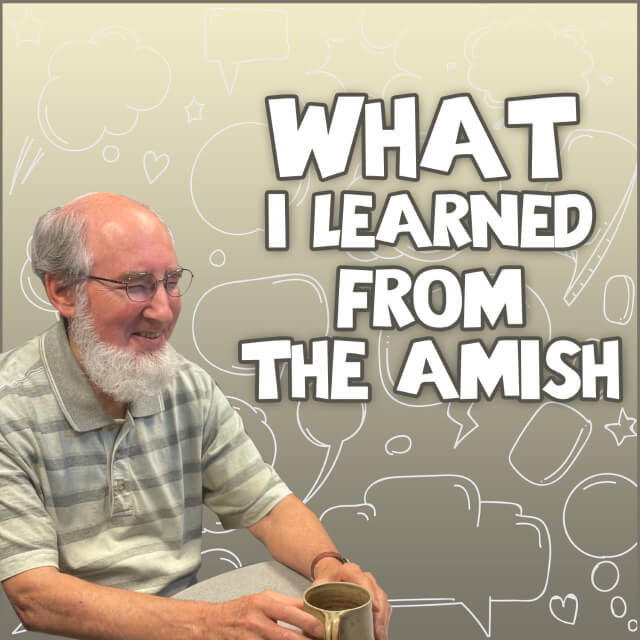 Donald B. Kraybill is professor of sociology emeritus at Elizabethtown College and senior fellow in the Young Center for Anabaptist and Pietist Studies. An internationally recognized scholar, he has published many books and professional essays on the Amish and other Anabaptist communities in North America.