Does anyone really care about beards? Donald Kraybill on writing the Concise Encyclopedia

We use them all the time, but ever wonder how reference books and resources get put together?

In a guest post today, Donald Kraybill offers a peek into the writing and research process for the Concise Encyclopedia of Amish, Brethren, Hutterites, and Mennonites:

Compiling the Concise Encyclopedia was a daunting task. In fact if I had known at the beginning what I know now about its complexity, I probably would not have undertaken it. In 2001, I published Anabaptist World USA (Herald Press). As the title suggests that book focused exclusively on the United States. As I was completing it I thought it would be helpful to have a single volume that included the United States and Canada and short essays on a variety of topics. And so I came up with the idea of a Concise Encyclopedia and in conversations with the editors at Johns Hopkins University Press, they were eager to publish it. So it’s been a 10 year project! 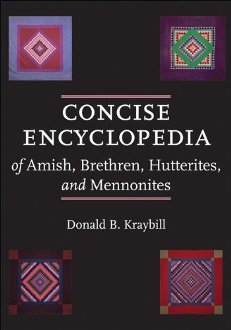 As I got into the project the editors at Johns Hopkins said that if it covers North America it must include all of the Caribbean and Central America countries as well as Mexico. That was a major challenge because it’s been about 30 years since I have been in Central America and so I needed to gather information by e-mail and telephone with personal contacts and Anabaptists leaders in the various countries. It also complicated the writing process because most of the Anabaptist churches in the United States and Canada have of course a European ethnic background. Many of the Central American, Caribbean and Mexican churches have Hispanic or indigenous backgrounds and speak a variety of languages. So the expansion beyond the borders of Canada and United States made the project much more challenging!

Personally, the project was also complicated and challenging because it meant I needed to gather and master information on some 200 groups and on dozens of topics which I really had little familiarity and was not expert on.  Then I needed to summarize the information in a concise and readable fashion.

It was also difficult to know which topics to include. Is the Beard important enough to merit its own entry? Does anyone really care about beards? What about Prayer? It’s an important element of the religious life of these communities, but what exactly does one say about it? What about quilts, television, iPods? As you can imagine the list of prospective  topics could easily rocket into the thousands. In any event I ended up with about 350 and I’m pretty pleased with the selection at this point.

One of the complications working on a book like this is that churches and people are always changing and in flux. We tried to update a number of things quickly as the deadline for submission approached. For example, we quickly added a sentence or so about the Haiti earthquake in January 2010 to the entry on the country of Haiti. To give another example, the major Mennonite organization Mennonite Mutual Aid (MMA), changed its name to Everence in the spring of 2010. So we made that change but then had to go through all the other essays and searching for MMA replace it with Everence.

Another question we struggled with was photos. Some people thought we should include them. But when you have 200 groups how do you adequately represent all of these groups and photographs. If you don’t have a photograph for each group and focus just on Amish and Hutterites it intends to bias the presentation towards that particular group. So in the end we decided not to include any photographs. But we do have a number of tables, maps, charts, and lists of resources related to things like Anabaptist-related colleges, publishers, and information centers. We also have an extensive list of references for additional research at the end. The whole idea was to create a resource which would be user-friendly and helpful to people looking for a portal into the Anabaptist world.

I’m delighted and also relieved that it’s finished and now I’m eager to get on to other things.

If you missed the original interview and book giveaway contest, find it here.