“What I Learned from the Amish with Donald Kraybill”: Technology 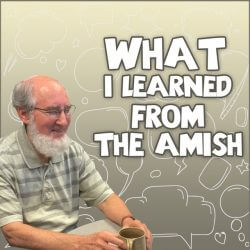 Donald Kraybill’s new podcast is called “What I Learned from the Amish”. Following up last week’s podcast on community, we have the next in the series, on technology. A snippet from this episode:

“For starters, let’s just cancel the big fat myth that the Amish reject modern technology. It’s just not true! What is true, is that Amish communities selectively screen new technology, trying to discern, if a particular technology, in the long run, will hurt or bolster their community.

When a new technology shows up a church community might reject it, accept it, or hybridize it. Amish people want technology to serve them, rather than to serve it. They scrutinize it and refashion it to serve their community. Their eye is on the long-term effects of technology on their community, their social fabric, and their future. And that, my friends, is a valuable lesson for all of us.”

In this episode, Don and Amish friend Ben talk about how Amish decide which technologies are acceptable and which are not, whether bishops decide things, how long it takes for technologies to be accepted, and more. Ben gives the example of a home LED light as one that was accepted fairly quickly in his area, because of their convenience for elderly people and their practicality.

He also talks about the telephone and electronic communications, and particularly why the smartphone – which he admits to having a love-hate relationship with – is “a feared instrument” in his community. It’s a fascinating discussion and a good one to have out there, as this is one of the topics that generates the most puzzlement and questions.

You can listen to the full episode here, as well as at Spotify, Amazon Music, and Apple Podcasts.