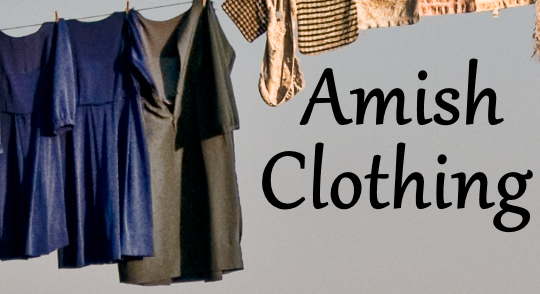 Why do the Amish dress plain? The style of clothing Amish wear reflects universal values of humility and modesty. A uniform style of dress discourages physical appearance as a source of pride. Plain clothing also carries important traditional symbolism.

The specific style of plain clothes worn by the Amish are a marker of the people, with variations in clothing often indicative of a particular Amish affiliation. Amish discern differences in plain clothing styles between different groups which can help them place the origin community of the wearer. Read more on Amish clothing.

Why do Amish women cover their heads? The practice of head covering is derived from 1 Corinthians 11: 5-6 – “But every woman that prayeth or prophesieth with her head uncovered dishonoureth her head: for that is even all one as if she were shaven. For if the woman be not covered, let her also be shorn: but if it be a shame for a woman to be shorn or shaven, let her be covered.” 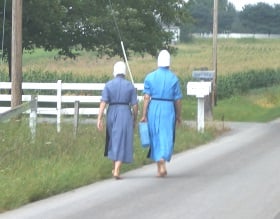 The practice of covering the hair is derived from the Bible.

What’s the difference between a bonnet and a kapp?  The kapp is often mislabeled a “bonnet”. The kapp, also referred to as a prayer covering, is the typically white covering worn by Amish women directly over the hair. Bonnets are larger, typically black, and worn over the kapp, usually when outdoors. If worn by a young girl the kapp may be black in some communities.

The kapp varies in style across communities. The Lancaster kapp has a distinctive heart shape, while those worn by Amish women in Midwestern communities have straight pleated sides which end in a rounded top.

Do Amish women cut their hair? No, Amish women traditionally do not cut their hair. This is also based upon Scripture, namely verses in 1 Corinthians (see above section on head covering). In practice, some women may occasionally trim or thin heavy hair. Amish girls before being baptized may also cut their hair, even wearing English hairstyles. Amish women pin up their long hair underneath the kapp, or prayer covering.

Why do Amish men wear beards (but no moustache)? Beards mark differences between the sexes and are considered to be Biblically mandated by the Amish. Amish typically grow them at marriage, but that can vary by community.

Some Amishmen trim their beards, while others let them grow uncropped, deferring to Leviticus 19:27 (“Ye shall not round the corners of your heads, neither shalt thou mar the corners of thy beard”). It’s somewhat unclear why moustaches are not worn, but a possible reason is that they were once associated with European military.

Do Amish wear buttons? Contrary to popular belief, many Amish do wear clothing with buttons. Amish women’s dresses may feature buttons, as do the trousers of the men. Some women do use straight pins to secure their dresses. Amish do use hooks and eyes on their church suits (mutza suits). At one time Amish were known as Häftler (“hook-and-eye people”; see Amish Roots: A Treasury of History, Wisdom, and Lore; ed. John Hostetler, “Reply to Jacob Amman” p.24 intro).

What is a mutza suit? The mutza suit is a suit traditionally worn by Amish men to church, funerals, and other formal occasions. The simple suit coats have no collars, pockets or lapels. 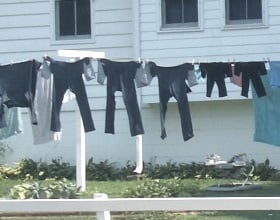 What are broadfall trousers? A style of pants worn by Amish men. Broadfall refers to a flap which covers the entire front of the trousers, rather than a fly.

Do Amish men wear belts? No. Amish men wear suspenders. Most who do wear suspenders, wear a set of two. One group in central Pennsylvania wears just one, strung diagonally over one shoulder. And another group wears none. Their trousers seem to remain in place (supposedly, hidden drawstrings keep them up). In some more communities, Amish men forego suspenders in their everyday wear. This can be seen in places such as northern Indiana and Holmes County, Ohio.

Do Amish wear sneakers or athletic shoes? Some do wear comfortable trainers or sneakers, women and men included. Usually they are of a plain black color. Skecher’s is a popular brand in some communities.

What should I wear if I visit the Amish? It’s a good idea to dress modestly. Try not to reveal a lot of skin; women should avoid low cut dresses. It’s a matter of showing respect, and Amish will appreciate it. Also, don’t think you have to “dress Amish”. That would be strange.