I had a massive craving for pie the other day, one which struck like lightning.  In North Carolina I am over 2 hours from any Amish communities, so I headed posthaste to my local Kroger for the store-baked variety.

The black raspberry pie I selected came in an attractive matte box which had encouraging things printed on it, like “Private Selection” and “Fresh Baked In Store”.  Even better, it was still warm.  The pie lightened my wallet by a little over 8 dollars.  Not too expensive, but not too low to automatically place its quality in question.  So far, so good. 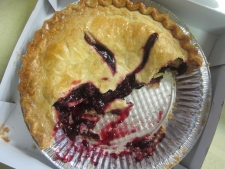 Too much left to be Amish?

As with so many things in life, appearances cease to matter if the container’s contents are not up to par.  The verdict? It was tasty enough, though, I was sure, not as good as most Amish pies I had eaten.

Something was missing which I couldn’t quite put my finger on. A pleasure center in my brain had not been tweaked by this pie in a way that others had managed.  Were I a more regular baker perhaps I could be more specific.

But had you popped it in a plain unmarked white box, and told me it was Amish, would I have believed you?  Possibly; quite probably actually.  Would I have judged it more favorably “knowing” Amish people had made it?  A good question.

Magic in the kitchen

What got me thinking about this? A reader recently shared an anecdote about a restaurant which serves food branded with the “Amish” name:

My niece works at [name redacted] Restaurant.  My brother gave this story:
‘A relative’ discovered that food can come in the restaurant’s back door from Sysco, be prepared by Mexicans, and be sold out the front as Amish food! (or Amish Kitchen Cooking or Amish cooking)

Ever hear anything similar? Makes me wonder how many tourists eat there only to later regale the folks at home with tales of delicious Amish cuisine.  Maybe the superiority of Amish food is built partially upon myth.

How do you think you might do in an Amish food taste test?  Could you tell the difference between an Amish-made dish and its non-Amish counterpart?

And maybe the most important question:  What makes the Amish version of a food better?  How much is the package, and how much is something more?