Bergholz leader Sam Mullet is hoping to be granted freedom this coming Monday, March 2. That’s the date set for resentencing following the overturning of hate crimes convictions in August.

The prospect no doubt concerns Amish in Ohio and elsewhere fearful of repeats of the beard-cutting attacks of 2011 (or worse). 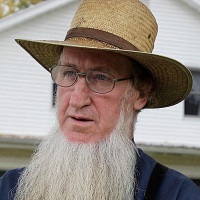 Mullet’s attorney says that “Mullet’s only wish is to return to a peaceful Amish community and put this ordeal behind him.” However, critics might note that the 69-year-old leader has a history of not doing what he says, such as in his promise to prevent future attacks only for another to occur.

Perhaps prison time has worked a change in Mullet’s heart. Though due to his track record, I wouldn’t blame any Amish people for taking anything Mullet claims with an enormous grain of salt.

Others imprisoned will be resentenced as well. Those given one-year terms (6 individuals, including 5 women) have already been released, as have those with two-year terms (2 individuals). Others were incarcerated for five years (3 individuals) and seven years (a total of 4, among them the 2 ministers, including Mullet’s son Johnny), with the longest term of 15 years being served by Mullet.

In an email to attorneys, U.S. District Judge Dan Polster has said that he will likely permit the 8 already released to remain free (to be sentenced to “time served”), but has not given any indication about the 8 remaining in prison.

No doubt Amish in Ohio and many other communities will be greatly anticipating Monday’s news.

What next for Bergholz? And what about forgiveness?

There is of course the question of what will happen to members of the Bergholz community. In the final chapter and epilogue to Renegade Amish, Donald Kraybill speculates about possible outcomes, and also raises the question of forgiveness. He also describes how some have left the community, while progressive change has crept in with leadership absent. 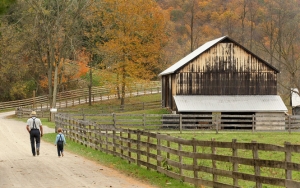 What lies in store for the Bergholz community? (Marvin Fong/The Plain Dealer)

Another question that has arisen throughout this case is addressed in the book, and remains relevant for their future: Is the Bergholz group a cult? Interestingly, Kraybill describes them as “not a full-blown cult” but as “a clan with some cultlike features” (p. 143).

So it’s unsurprising when one Amishman quoted says that “These people are totally not Amish” while an Amish scholar states that “They removed themselves from the Amish world when they stopped having church services.” (p. 138-139).

Ultimately the impression I got after reading Kraybill’s book is that of an off-the-rails community in the control of a powerful, influential leader assured of his own righteousness. Combined with an unrepentant heart and a desire for revenge, there could be danger ahead if Mullet is released.

On a more positive note, despite the fact that they have been essentially disowned by many of their former co-religionists, members of the Bergholz community and even Sam Mullet himself could find a way back into the Amish fold.

To their credit, Amish would offer forgiveness. One ex-member of Bergholz quoted in Renegade Amish says that “Even today the Fredericktown people and related congregations, even today, they would forgive Sam and accept him back if he was contrite, and confessed, and returned to them” (p. 149).

Likewise, a minister at Fredericktown, a community where Mullet once lived, said “Yes, we’d gladly take him back into the church if he repented and confessed” (p. 149).