Last year, Sam Mullet received 15 years for his role in beard and hair cutting attacks on Amish in eastern Ohio. But 15 others got lesser terms, ranging from a year and a day to seven years.

The first of the Bergholz people have now done their time and returned home to eastern Ohio. A Reuters news piece details how two of the group, married couple Raymond and Kathryn Miller, spent their days while in prison:

“I read, played softball and played pool. I liked pool and I was pretty good at it,” Raymond said.

“I think we could get a pool table at Sam’s,” he said, referring to Mullet’s home, which has a large meeting room for church services. “I think it would be alright.”

Kathryn, 25, who also learned the game, shook her head ‘no’ in the background.

“I like to play pool but we are not allowed to play pool here,” Kathryn said. “The girls in prison gave me a hard time that I was gambling.”

Raymond lost weight in prison because he did not like the food but says he did develop a liking for Mountain Dew.

Kathryn tends to a strawberry patch and the three young children she had to leave in the care of her mother while she was in prison.

Her now nearly 3-year-old daughter sometimes calls Kathryn’s mother “mom” even though Kathryn has been home two months. “She still asks for my mom a lot,” she said.

Kathryn said she wore a smaller head covering than her typical Amish bonnet while in prison, along with long brown dresses. She uses prison slang and referred to fellow prisoners as “cellies” and “bunkies” and talked about the SHU, or solitary housing unit.

Knowing that she would be returning soon to her family kept Kathryn going. She also discovered yoga and step classes.

Miller currently wears an ankle bracelet and has had a phone put in to be able to make daily calls to his probation officer.

“I’m ready to get rid of it,” Raymond said of the telephone installed in his home. “We get salesman calls about electric bills and they don’t believe that we don’t have an electric bill.”

While this is essentially a fish-out-of-water article about how Amish deal with prison, that’s not the most revealing part of the piece. The most interesting bit to me is Miller’s comment about “get[ing] a pool table at Sam’s.”

Some have wondered whether this group would disintegrate and/or disown Mullet following their incarcerations, but that comment seems to suggest otherwise.

Held up, tied up…locked up

A less bizarre wrongdoing against the Amish was committed in western New York, just the latest of recent accounts of crime against Amish. And as in those other cases, the perpetrator has been caught.

A 22-year-old man robbed an Amish shop owner at gunpoint, then tied him up. The Amishman later gave authorities a description of the vehicle, which led to the robber’s arrest at his home. How much thought do these guys put into their plans?

After the potentially good news given in last week’s article on lower Amish asthma rates, the spotlight is now on a less-rosy side of Amish health.

Lancaster General Health has begun reaching out to individuals identified as having high LDL cholesterol.  An inherited disorder called familial hypercholesterolemia (FH) may be the cause. From the Lancaster Online article:

In the general population, FH traditionally was believed to be found in 1 in 500 people, but recent studies have suggested it is more common, perhaps found in 1 in 250 people, Rader said.

In the Amish and Pennsylvania Dutch, the rate could be even higher, Rader said.

Doctors already know that Amish people have a much higher rate of high cholesterol, due to a specific genetic mutation that is known to have originated in German-speaking Switzerland, the original home of the Amish, Rader said.

More studies are needed, Rader said, to determine the rate of FH in the Pennsylvania Dutch community, and determine if it is a founder population.

In the meantime, doctors do know that if a child’s mother or father has a gene mutation causing FH, each of their children has a 50 percent chance of inheriting it.

People with FH cannot control the disease with diet and exercise alone.

“They can be as skinny as a rail, run five miles every day, eat grass and still have high cholesterol,’’ Davis said.

The goal is to treat FH afflicted individuals and identify relatives who may be at risk, using a strategy called cascade screening–essentially checking a high-LDL individual’s close relatives, as well as extended family, for similar readings.

“It’s almost a culture shock from some of the high-rolling estates that we do work for,” Glick said. One client had 30 sports cars. “Never having driven a car, I really can’t appreciate,” Glick told me. “Now, if he had 12 nice driving horses, I might say, ‘Ha!’ “

To do his work Glick has rebuilt and modified electric forges to run on “liquid fuel, compressed air or batteries.” The full article is at philly.com. 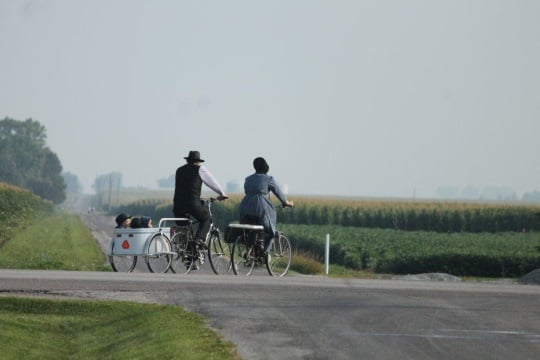