Forty Years of Driving The Amish in Lancaster County

Driving the Amish has come up here on a couple of occasions recently.

Earlier this year we read about Debbie, an Amish taxi driver whose story appeared in the Amish monthly Family Life. I also listed it as one of my happier challenges of living with the Amish.

So I thought you’d enjoy this Lancaster Online story on a County resident who’s done Amish taxi duty for four decades and counting.

Carl Cisney got into driving the Amish by chance:

Four decades ago, Carl Cisney’s life changed when he gave an Amish neighbor a lift to a welding shop.

The neighbor introduced him to an Amish man named Steve Esh.

The Amish population is growing and needs drivers, Esh told Cisney. If you get a van, I’ll make sure you’re busy, he promised.

Cisney had been laid off from Trojan Yachts and was looking for work. So he borrowed $600 from a friend, bought a used van and never looked back. 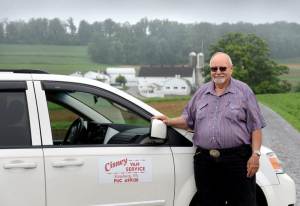 As this snippet suggests, Amish taxis aren’t in fact the yellow variety. The van is a popular vehicle–maybe the only one that really makes sense if you plan to regularly haul Amish and their large families.

According to the article, Cisney is believed to be the first person in the state certified to drive the Amish, so that gives us a clue.

A popular service, but not for everyone

The plainest Amish do not permit hired drivers except in emergency situations. But many Amish pay English drivers for trips to work, shopping, and visits to family which would be impractical or impossible using other forms of transport.

How often they do this also varies. And if you ask Amish you’ll find that some drivers are more popular than others.

Cisney apparently has a good record, both with the Amish and the state, who’ve never received any formal or informal complaints about him.

Cisney takes Amish on shopping trips, to medical appointments and to visit relatives. He’s taken groups to vacations in Niagara Falls and to beaches in Delaware.

One client, an Amish grandmother, said she’s a “pretty frequent” customer. She might take six trips in a typical month, she estimated.

Amish culture frowns on people calling attention to themselves, so she asked that her name not be used.

She likes the spotless condition of Cisney’s van, the fact that he’s always on time, and his smooth driving. Kids who get carsick usually don’t with Carl, she said.

We learn some other interesting facts in the article. For one, Pennsylvania has 151 “paratransit carriers” which is the official classification for these vehicles which service Amish and others whose “personal convictions” prevent car ownership.

Eighty-one of these carriers are found in Lancaster County. I can’t decide if these numbers are lower than I’d expect, or about right. It also makes me wonder how many others might operate “informally”, so to speak.

You can find the article in full here. It’s an interesting read which gives you a behind-the-scenes look at a service many Amish need and appreciate.