What are Amish customs regarding funerals – specifically the viewing, service, and burial?

I’ve been to an Amish funeral, and also a viewing in a separate instance, though have not gone for the burial. I shared my observations on the funeral here.

Ohio Amish church member Rebecca Miller has also given her account of funeral customs in the Holmes County community here. 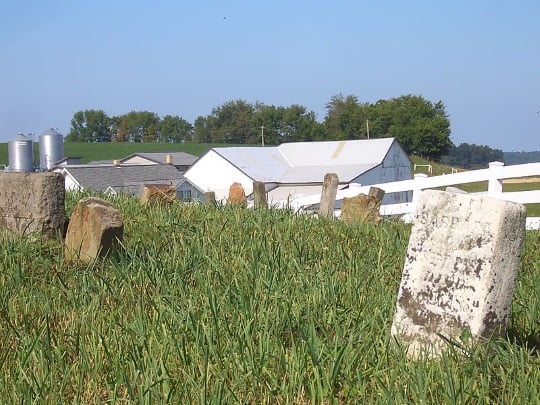 I’ve quoted rather liberally here, but I recommend reading the full column. I like the Amish Cook columns as they offer both a “slice of Amish life” – but beyond just sharing, say, the goings-on of a typical day, they also often give information on Amish culture, beliefs, and traditions.

In this column, Dorcas describes the funeral of her uncle Paul, who passed away at age 74 from cancer, leaving behind his wife Naomi and six adult children.

They traveled 400 miles to the “home place” where Paul had lived all his life, and where the funeral was held. It’s unclear which community that is.

It should be noted funeral customs can vary. Gloria Yoder is a member of a New Order Amish church. That doesn’t mean that this was necessarily a New Order funeral, however.

First, what happens at the viewing?

We arrived at 4 p.m. to attend the viewing and there was a line that was slowly moving. The viewing, which was in its second day, was held in a shop with rows of benches and chairs set up for family and friends.

Right next to the casket was Naomi and all of her six children and their partners. How they had loved and appreciated him. They have precious memories of taking care of their Dad the last weeks. In fact, the night prior to his death, all six children had been there. At such a time, family ties become all the more sweet and strong.

After we went through the line, we sat down for supper, which was being served to 175 people by the local church. It was delicious and included hobo stacks, brownies and ice cream. So many people came out to show their love and sympathy to the grieving family.

One of the most memorable parts of the evening was when a group of 30 youth gathered together and sang six songs. It was so lovely. “Amazing Grace “ was sung as well as songs about heaven.

Like a church service or other gathering, the viewing is held in a shop, basement, or other space at the home.

When I attended a viewing (in the Holmes County community), I had the impression of it being a social event as well as a time to remember and commemorate the deceased person’s life.

Food is important at any Amish event and the gatherings surrounding a funeral are no different. Uplifting hymns help those facing loss think on higher things.

Then, the funeral service, in a familiar place:

The next morning, the funeral was in a large machinery shed. It seemed fitting to have a dairy odor drifting into the shed; Uncle Paul had been a dairy farmer all his life. Hundreds of people filed in and the shed overflowed. More benches were set up right outside the shed opening. Rows and rows of women were in front of me, rows of black dresses and white head coverings. Close to the middle of the shed was the casket with the immediate family next to it. Three ministers each took a turn to comfort, exhort and encourage us as a congregation. One of my favorite parts of the sermons was likening Paul’s death to a ship on an ocean. When he passed away, friends and family said: “there he goes.“ But, yonder on the other side on the Heavenly shore, he is welcomed with “there he comes!”

After the sermons, the obituary was read. Paul and Naomi had been married for 49 years. Years of ups and downs, bumps and blessings, trials and tears but held together with love for God and one another. Indeed, they were blessed and were a blessing. This blessing lives on in the lives of their children and grandchildren as well as to others.

After the service, there is a final viewing:

Next, we all filed past the casket for one final viewing.

Meanwhile, a group of friends had gathered and sang three songs. To me, the loveliest one was the German version of “how beautiful heaven must be.”

At the very last, the immediate family gathered together around the casket for the final farewell — at least for this side of eternity. For in Heaven, we will never say goodbye. Four young men from the local church carried the casket out to the horse-drawn hearse.

The casket is typically a very simple pine box. A local Amish person may be responsible for making the community’s caskets.

In this case, there is singing at the graveside, followed by a final prayer:

At the graveyard, the minister shared several thoughts, and several more songs were sung. The first one was “Goodnight, My Beloved.” This song is sung at most every Amish gravesite funeral. Next, the family was singing “that will be my last long move I’ll have to make,” and many others joined in. Slowly, the casket was lowered and then many hands helped cover the grave. At the very last, there was complete silence as everyone quietly prayed and said the Lord‘s Prayer.

This was followed by a lunch for everyone.

The book The Amish Way: Patient Faith in a Perilous World has very good in-depth discussion of Amish funeral customs and beliefs. From page 175:

Death in Amish society has not been sanitized or segregated from daily life. Members of the family touch and dress the body. Children are exposed to the reality of death many times before they reach adulthood. Church members dig the grave and cover the coffin with dirt. Death is received in the spirit of Gelassenheit, the ultimate surrender to God, as the community reflects on the familiar words of a hymn they have sung since childhood:

Consider man! The end,
Consider your death,
Death often comes quickly;
He who today is vigorous and ruddy,
May tomorrow or sooner,
Have passed away.

Some Amish, notably those of New Order churches, believe in assurance of salvation. But more often Amish speak of a “living hope” that their deceased loved one is with the Lord in heaven.