It’s been out for over a week now, but if you didn’t catch it, The Guardian has a nice article on Amish converts in the Oakland, Maryland community, by Amish Cook editor Kevin Williams.

Since we’ve frequently had pieces on converts to the Amish on this site (later this week we’ll have an update from contributor Anne on her convert son Ed), I thought it would be of special interest.

It turns out the Oakland community, one of the more progressive, is home to at least two converts. Christina Cortez is just 21, and formerly lived in California. She works in a bakery in the settlement, and one day would like to move to a plainer community. 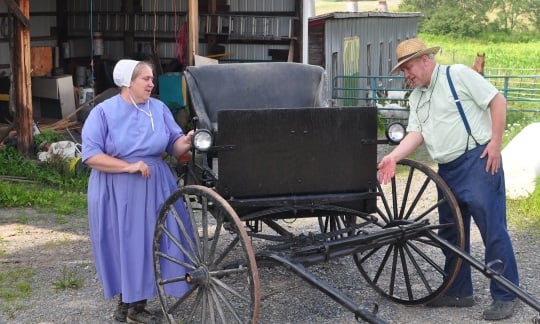 Curtis Duff is 60, married to an Amish-raised woman, and says it’s hard to remember when he wasn’t Amish. Duff is college-educated, which caused a little hesitance on the side of the community at first, but which he later overcame. Also, he has a very atypical work arrangement for an Amish person:


He still lives with one foot in each world, on an 80 acre farm raising meat goats and crops while working three shifts a week as a registered nurse. The church accommodates Duff by allowing him to work on Sundays, and Garrett County Memorial Hospital reciprocates by permitting him to wear Plain clothes to work and drive his tractor to the hospital.

Edsel Burdge of the Young Center for Anabaptist and Pietist Studies contributes to the article, suggesting that the total number of converts to the Amish is between 150 and 200. He also has a good quote on one of the internal pitfalls to success as an Amish convert:

“Some people think plain is good, plainer is better and plainest is best but often what accompanies that is a critical evaluation of the community they are in and some perfectionism … the people that do the best are the ones who accept the fact that the Amish are human, with inconsistencies and weaknesses. Sometimes the idealism kills the success of a convert.”

Edsel adds that “converts who don’t have the spiritual interest don’t last.”

Read the article in full here.