When a son joins the Amish

One of our readers, Anne, has a son, Ed*, who was fairly recently baptized in the Amish church. I’ve been corresponding with Anne for some time on the subject, and hope to share more with you in future.  Anne and her husband have had an experience unlike most, in watching a college-educated son with a modern upbringing join one of the more closed religious societies in the country.

From what I’ve gathered from Anne it’s been both a blessing and a challenge. There is a lot of discussion here and elsewhere about what an individual goes through when seeking an Amish community, but less from the perspective of family members that have experienced a relative joining.

I’ve never had a family member who sought the Amish, though a few years ago my brother seriously considered joining a religious order which would have meant limited contact with his family for the rest of our lives. I remember the conflicting emotions I went through as he mulled that decision and it began to look like he was headed in that direction (a direction he ultimately did not choose).

Anne and her husband have seen a similarly consequential step actually taken by a child.  Although they do see each other, adopting an Amish lifestyle necessarily alters the type and frequency of contact you have. 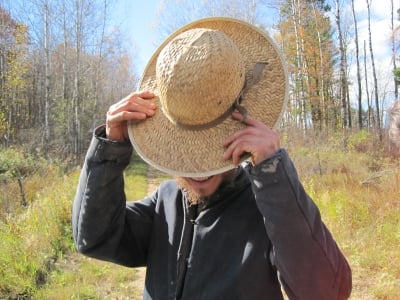 Certainly not completely though, as you’d think must be the case when you are bridging two worlds with parents on one side of the gap.   As an example Anne shares that “he does not actually “pose” for the photos, but he does put up with us, as parents who just won’t give this part of life up!”  You can see Ed doing his best non-pose here.

Anne writes that Ed “was raised by a family who takes their Christian calling very seriously, especially in terms of being salt and light.” Furthermore she explains that “I am glad Ed is living a life of Christian integrity, and I’m glad he will be able to raise his own children far away from the worldly system that is so enticing.  But I’m very sad his kids won’t have opportunity like he did: to study whatever their passion leads them to, to learn an instrument and relish the historic music of the church especially…to read great literature without worry of being censored.”

Outsiders at an Amish wedding

Ed was married last year to wife Ruth* in Wisconsin.  Anne and family attended the wedding.   She writes the following about the experience, along with a question for readers:

One thought I wanted to pass on to you, is the struggle we’ve personally had with adjusting expectations, in areas where there are clear differences. For instance, at the wedding, the elders had decided previously that the entire 3 hour service would be in Penn. Dutch. We found out later that this was somewhat controversial in this community, as there were some who recognized the implied dishonor this could mean to Ed’s family (about a dozen came, all from far away and at great expense).

And they were right! This was a very difficult thing for us. My husband’s parents, both in their 80’s, traveled the long distance from Texas to attend this ceremony. To sit for so long and not understand one word that was said, seemed like an insult to us. (They were not offended; they are too sweet and supportive of this beloved grandson to take offense!).

By way of more background, Anne adds that:

His own group DOES use English when there are visitors, or at least, has someone translate quietly, verbally, as you are listening.  That’s what we were expecting with this.  But at the wedding, all we got was some hastily scribbled notes from the poor friend of Ed’s who was trying to assist us.  No way one can write down everything that is being said!

Was this a (surprising) instance of this community breaking the command to “honor your father and mother”? We were VERY surprised at this, and I’d love to know what your readers would think.

A big thanks to Anne for sharing something that only a tiny handful of people have experienced.

*The names of Anne’s son and daughter in law have been changed.