I think you’ll enjoy this guest post today from Kate Hastings, about a special publication with a long and interesting history:

I was excited when Erik asked me to be a guest blogger, although I feel unworthy of the honor. I teach journalism, film, and writing at Susquehanna University in Pennsylvania, and I am not a scholar of Amish history and culture. I simply have a number of friends who happen to be Old Order Amish of Lancaster County, Pennsylvania, extraction.

Last week, my Amish friend Rachel and I went on a thrift store shopping binge. It’s a rare day when she can get away from her six children under the age of 13, so we used the time to visit as many stores as possible to stock up on roller blades, rubber boots, baby gifts, embroidery floss, and supplies. She and her mother are avid readers of the nineteenth century author Mary J. Holmes, so we visited a used book store as well.

As we passed a display case, Rachel called out. There, for sale, were eight issues of the Neuer Gemeinnutziger Pennsylvanischer Calender from the 1880s and 1890s. Both of us instantly recognized the cover as nearly identical to the Amish-produced “New American Almanac” that Erik has discussed before on this blog. 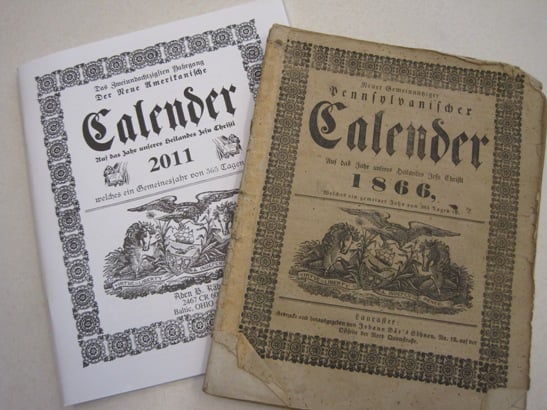 A present-day Amish Calender and a 145-year-old ancestor

As Rachel and I pressed our foreheads to the locked glass display case to examine the covers, we longed to hold the old Almanacs and turn the pages. The very next day, I went back and bought them all.

Calendars play a significant part in the lives of Old Order Amish of Lancaster County heritage. Picture calendars are one of the only forms of pictorial decoration allowed on the walls of their homes. Once, in the home of a Lancaster County Amish friend who lives in a “daughter settlement” in Indiana, I realized that I could see six picture calendars from where I was sitting in the kitchen. They featured horses, barns, lighthouses, bluebirds, and wildflowers. No calendars with photos of people are permitted. 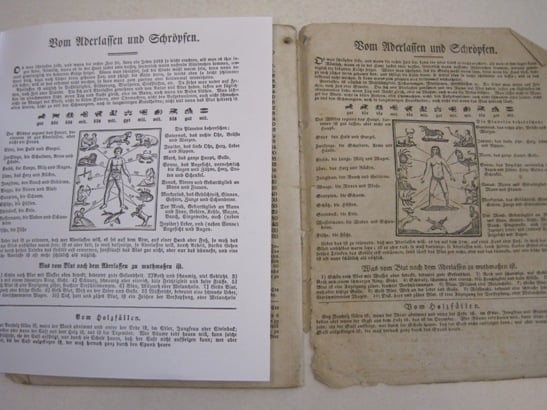 Last page of the Calender, then and now

One reason that the Amish value the “New American Almanac” that almost everyone calls the “Raber Almanac” is that it lists the dates for special holy days that are not found on ordinary calendars. For instance, Pentecost is observed in the Old Order Amish world, and Lancaster County Amish also reserve the day after Pentecost for visiting. Known as Pinksta Monday, the holiday closes many Amish businesses for the day. The Raber Almanac also lists other important holy days for the Amish, such as Ascension Day.

A sacred and important holiday for the Amish is Oct. 11 , or “fall fast day,” each year, and English customers will also find businesses closed that day. If Oct. 11 falls on a Sunday, the holiday is observed the day before. The holiday has its roots in the Feast of St. Michael, also known as Michaelmas. While the Catholic Church observes this holiday on September 29, the Amish did not adjust the date when the Julian calendar was replaced by the Gregorian calendar, and thus their holiday is Oct. 11. 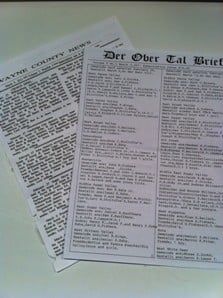 Another benefit of the Raber Almanac is that it lists when services will be held in each church district. All Old Order Amish church services (gemeinde, pronounced ge-MAY and abbreviated “gmay”) are held every other week. They either meet on an A schedule or a B schedule, so that you can look up the Rebersburg district of Centre County, PA, and see that gmay will be held on B Sundays. Whose house will host gmay, however, is announced in one of the “gemeinde brief” (church newsletters) publications that are published by the various settlements.

The Raber Almanac also includes ads, inspirational short articles, astronomical events, the scripture to be covered in church, and 60 pages of ministers’ names, birth years, addresses, and dates of ordination. This listing of Amish church districts and their ministers is not found anywhere else in Amish literature, so it’s another big selling point for the Raber Almanac, which, by the way, can be purchased in either German (not Deitsch) or English. Because my German is scanty and slow, I bought the English language almanac once to use for help in translation, but I found that the text is quite different. There are no shortcuts to anyplace worth going, I suppose.

The Raber Almanac continues the tradition of publishing the dates of holidays that pretty much nobody observes any more. For instance, the Ember Days are noted on the inside front cover of the 2011 almanac and on page two of an 1881 edition. This morning I asked an Amish historian, a German-born Catholic, and a medieval historian if they had ever heard of Ember Days. Only the latter had heard the term, but no one could say what they were. 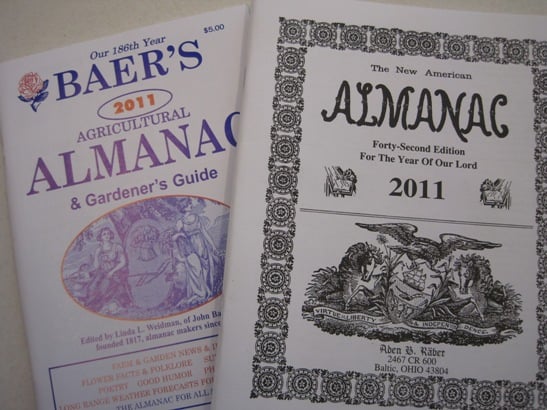 Finally, the old Pennsylvania almanacs that I bought turn out to have been the product of an amazingly prolific nineteenth century entrepreneur named John Baer or Johann Bär (1797-1858), a printer in downtown Lancaster. Baer began his English-language “Agricultural Almanac” in 1825, and it’s still printed in Lancaster County today. The German language almanac was started in 1831, was going strong up until the first World War, and was purchased and revived by J.A. Raber in 1930. So after almost 100 years in English hands, the New American Almanac, still featuring a stylized crest of the state of Pennsylvania on its cover, has flourished in Amish hands for more than 80 years.