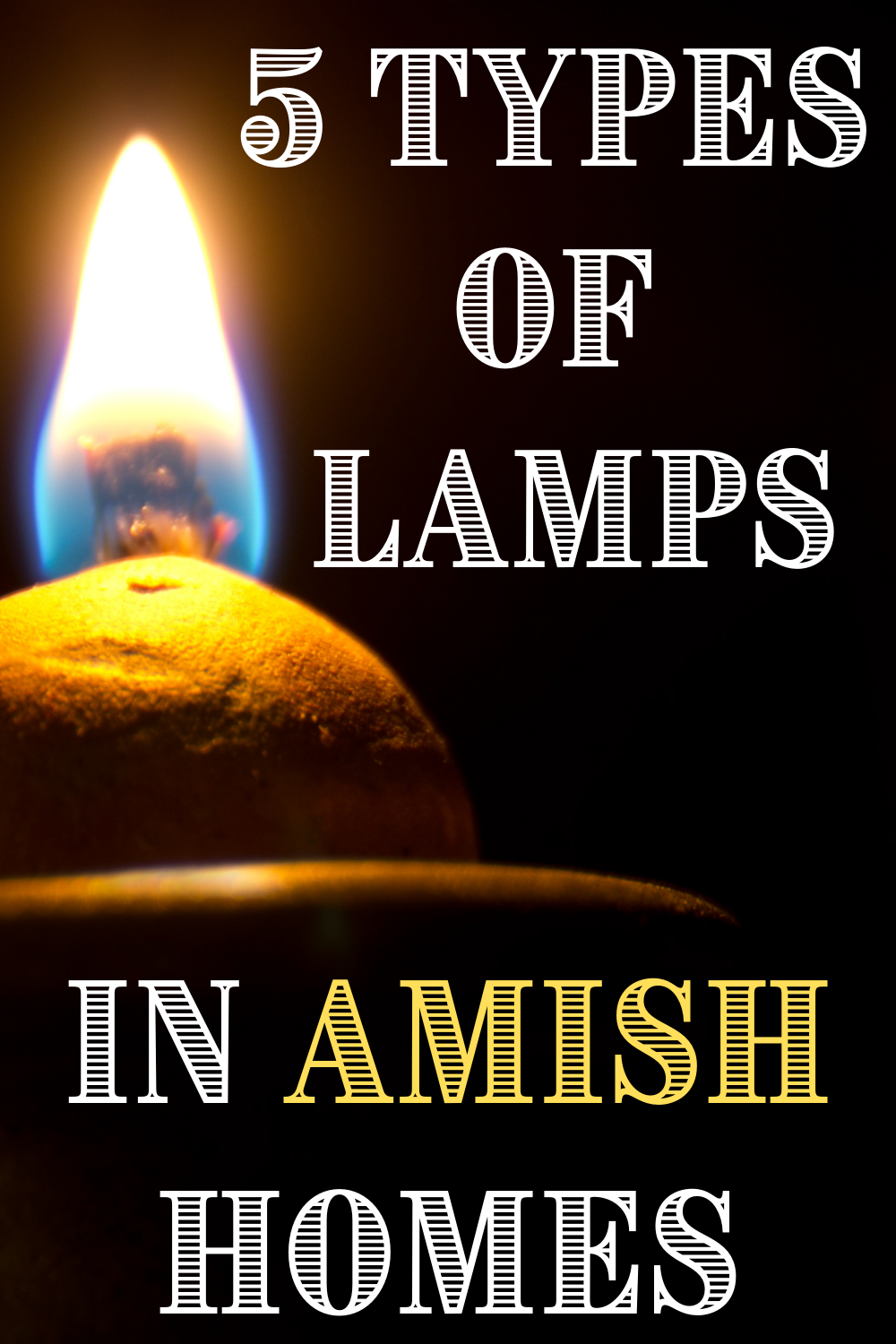 Some photos in the latest Kentucky Amish home post caught at least one reader’s eye – showing a lamp in an upstairs bedroom which appeared to have a cord.

Meanwhile, in the downstairs portion of the home, we saw more traditional examples of Amish lighting.

So I thought it would be interesting to share with you examples of different types of lighting in Amish homes. I also go into the Kentucky home situation in more detail below.

First here is a ceiling light in the Belle Center, Ohio community. This is designed to remain fixed in place. Note the heat shield. These types of lights are powered by propane or natural gas. 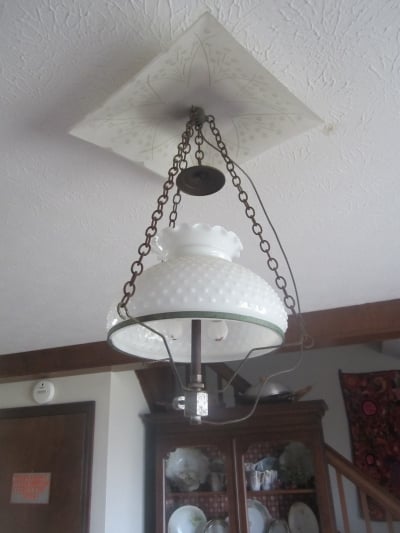 Closer up on the thorium mantles: 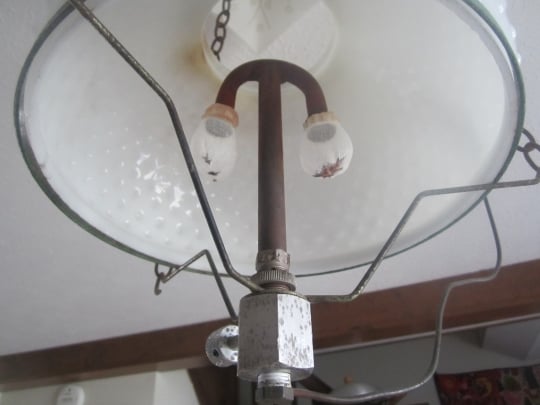 Another home in the same community: 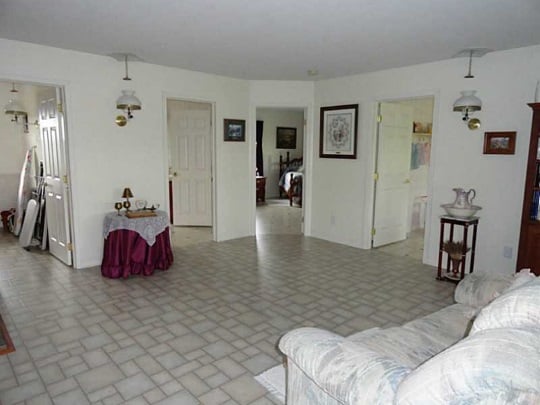 Here’s one from a bathroom in Pennsylvania: 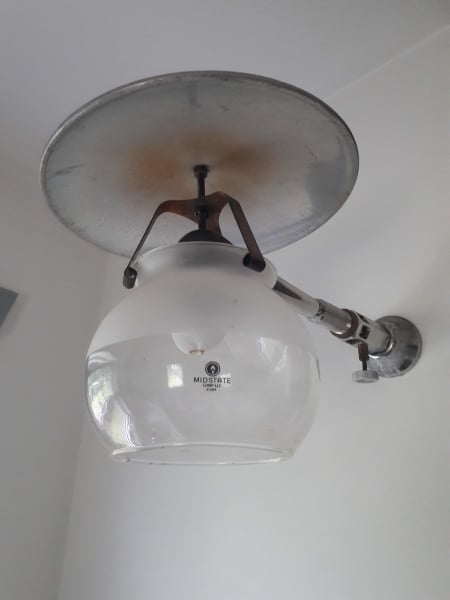 These examples in photos taken by Don Burke are from a home in Jamesport, Missouri: 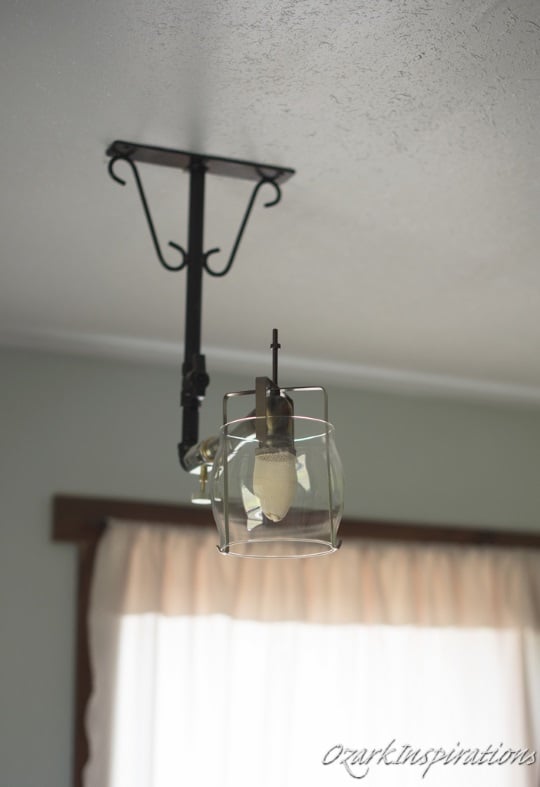 These built-in lights are fed by a propane tank located outside the home. 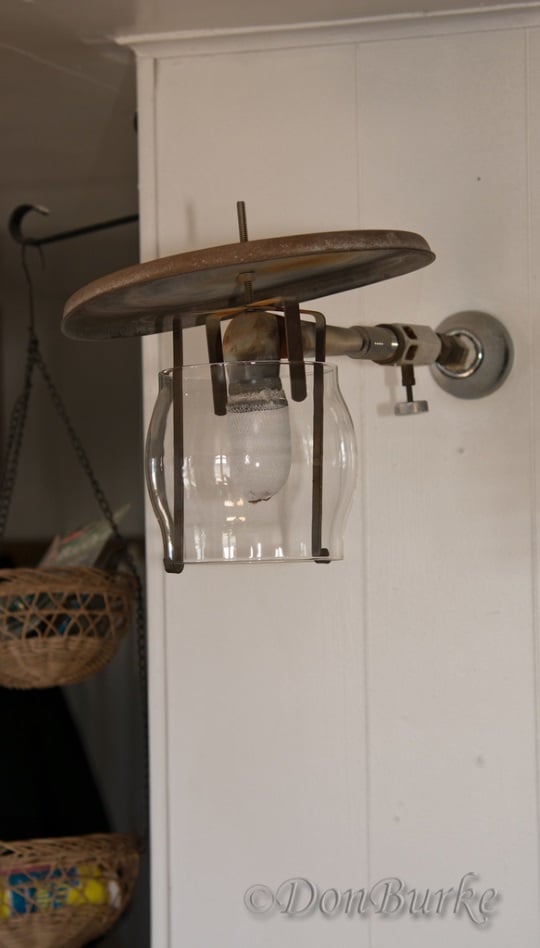 This one has a lighter attached to the end of a string, so you never have to hunt for it: 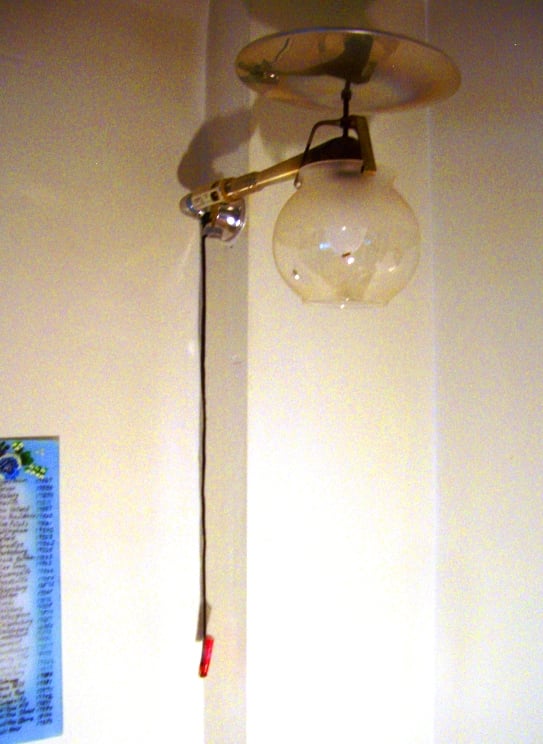 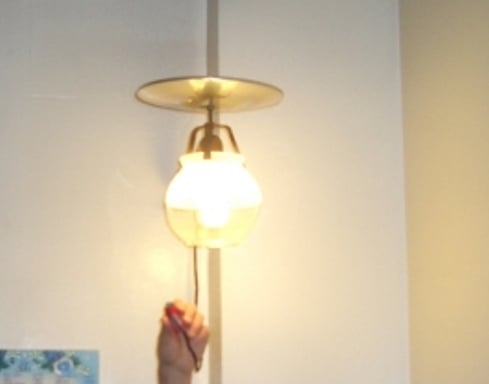 In addition to propane and natural gas, naphtha is another hydrocarbon fuel which some Amish burn.

These are all examples of permanently-mounted fixtures, but you will also commonly see the removable version.

This is basically a heat shield as seen above, but with a central hook to hang a portable lamp, so that the light can be put up and removed or switched out as needed.

Another common Amish lighting example is a propane tank mounted in the bottom of a wheeled piece of furniture. This makes it easy to move the lighting around a large main room to wherever it’s needed.

The tank is typically enclosed in a wooden cabinet. In the example below in a Michigan Amish home, the furniture is hickory style with the bottom open and tank visible: 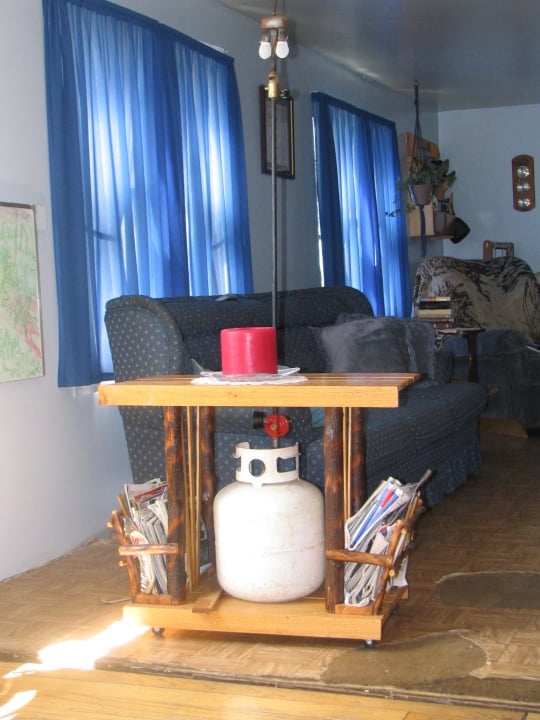 The thing about that open-mantle design is you need to be a bit more careful with it, since the extremely hot lamp is not covered by protective glass as you see in most of the above examples.

Here we see another rolling lamp, but you will notice the top has a curly-style compact flourescent bulb (CFL).

The cabinet would contain some sort of inverter/battery setup. Found in more progressive homes. This is also from a Michigan Amish community, a different home than the one above (this and previous photo by Karen Johnson-Weiner). 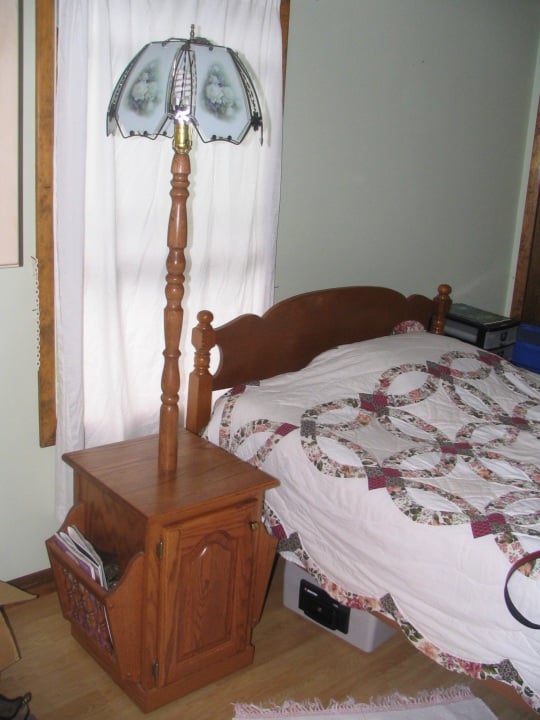 Many Amish use inverters, on a limited basis, to convert DC battery power to AC, which can be used to power some appliances. You can see a very sophisticated example of that here.

Here’s a simpler, non-lighting example showing a car battery connected to an inverter, which in turn powers a home monitoring system for the Amish patient’s defibrillator.

The inverter is on the shelf to the right of the device with the screen. This is all housed in a phone shanty: 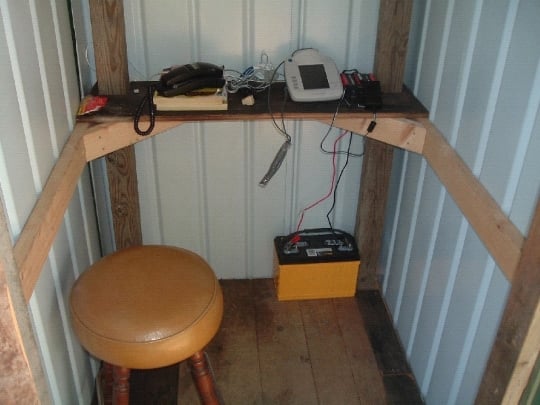 What a simple inverter looks like. There are positive and negative terminals on the back where you can connect a battery. This design has two outlets: 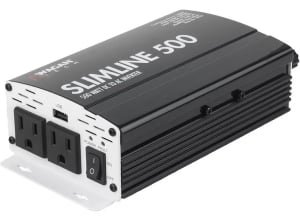 You might also see LED bulb lighting, as in these photos by Don Burke, also from Missouri: 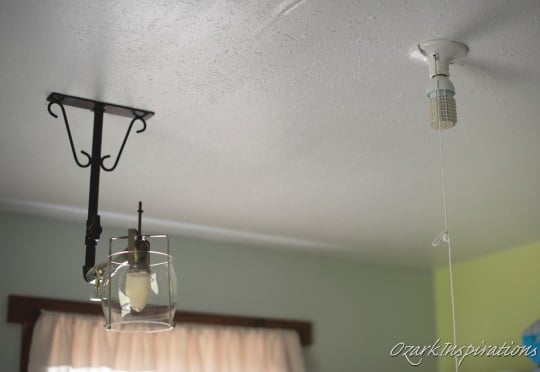 The above light is ceiling-mounted, but small battery-powered LED lamps are common as well.

In the recent Kentucky Amish home photos, we see a car battery next to a nightstand lamp in one photo, and what looks to be an inverter powering a standing floor lamp in another. I’ve reposted those photos below. 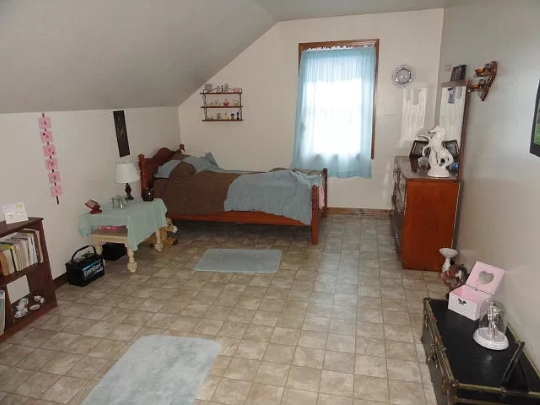 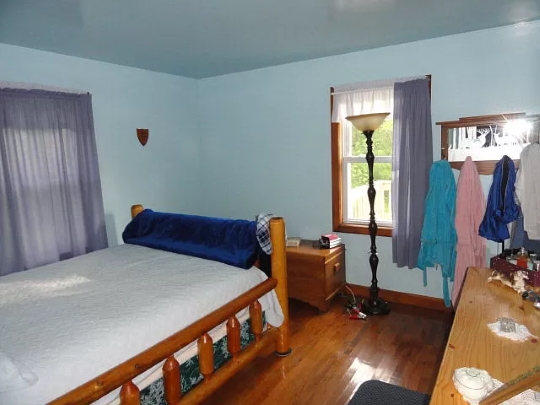 Interestingly, the home has more traditional lighting – wall-mounted gas lamps and a propane tank floor lamp – in the downstairs rooms. 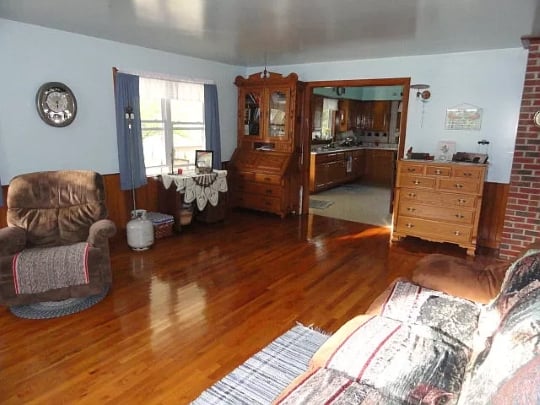 I would speculate that this might be a nod to tradition. I have noticed this in other homes.

In the more “public” downstairs areas, you have plainer, more conventionally “Amish” lighting.

The more technologically advanced lighting (accepted in these churches) is seen more often upstairs in more private areas of the house like bedrooms.

These handy devices are highly portable, and give off a strong light without the heat of the propane lighting. 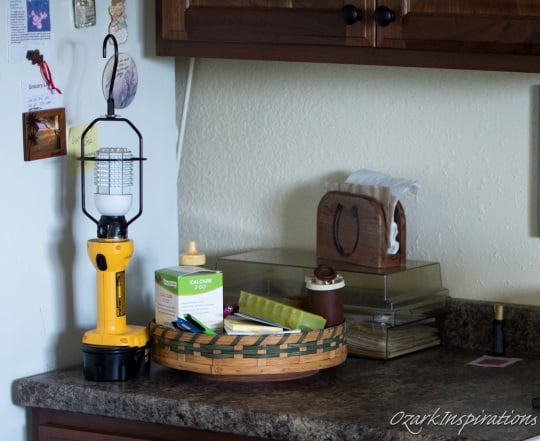 The base is the battery, which is detachable. A family who uses these would power up the batteries during the day or overnight using a diesel generator or other power source. “Dewalt” is the popular brand name. 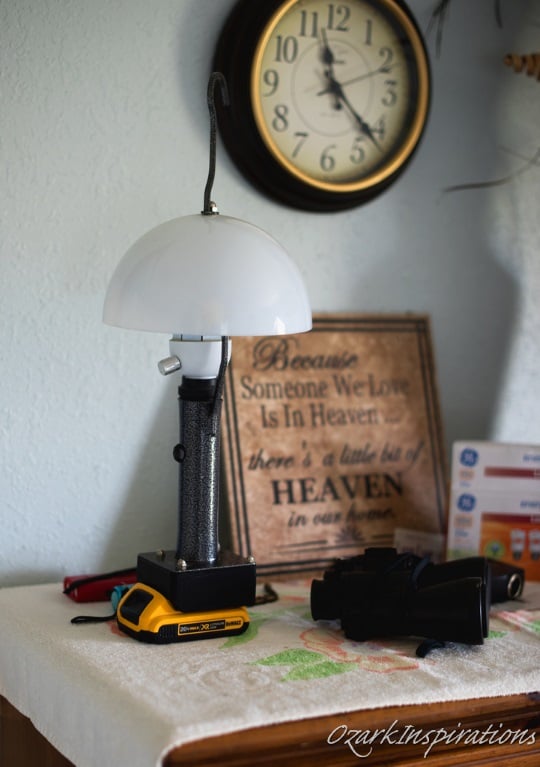 It’s a lot easier to carry one of these around, which you can turn on with the flick of a switch, than to have to light a propane lamp – which is also going to generate a lot of heat that you might not want in July.

I often get one of these at night when I am staying with Amish friends. In that case they have the traditional propane lighting in their home as well.

I realize these sorts of lights might not seem “true Amish” to some people.

But the reality is that many Amish in the mainstream/progressive category use these, and often have a mix of both in their homes. They’re common in the larger communities like Lancaster County.

Now, an example of plainer lighting. Kerosene and oil wick lamps are seen in more traditional Amish homes, like Swartzentruber communities, for example.

These oil lamps are common in the Swiss Amish settlement in Adams County, Indiana. Photo taken in an Amish store: 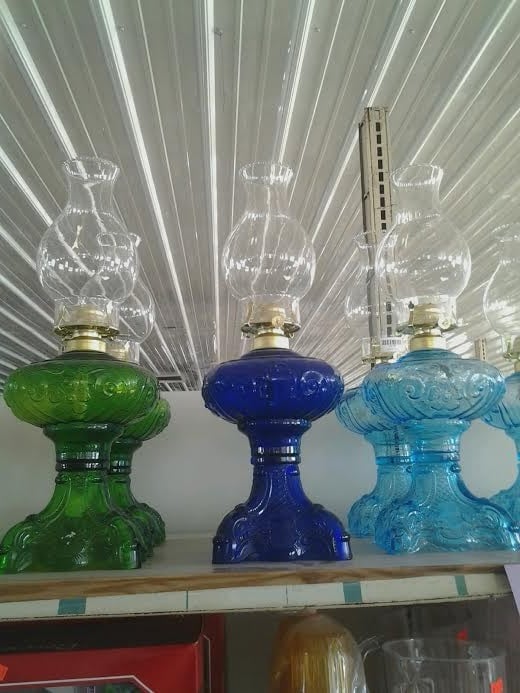 These are mirror reflectors which magnify the light. People in this community also use aluminum foil as a homemade reflector: 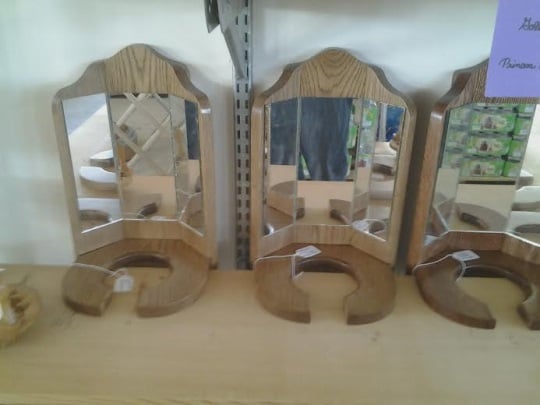 You can see kerosene lamps all around this Swartzentruber home in Ohio (via LaVonne DeBois of Heartland Tours): 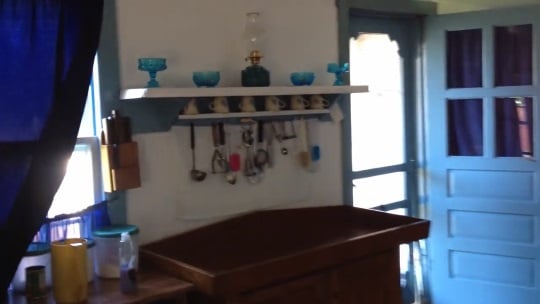 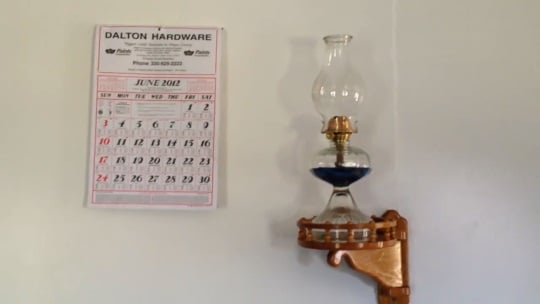 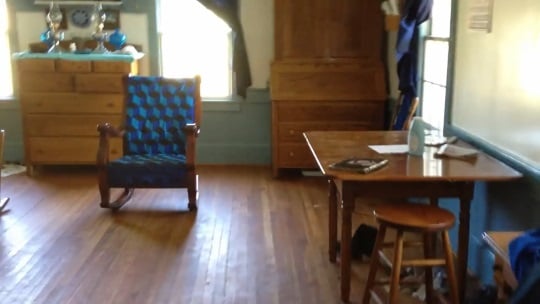 Here’s the soft glow of such a lamp, seen through a window in New Wilmington, Pennsylvania: 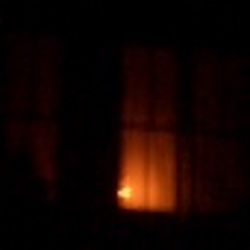 Back in November in Ohio I stopped in after dark at a Swartzentruber place to buy a rag rug.

The older couple inside was preparing Thanksgiving turkey for the next day, by the light of a single lamp on the table.

The light gave hardly a glow through the door window, so you could barely see that someone was home.

If you want to do anything with that sort of dim light, you kind of have to gather around close.

On the other hand, the double-mantle propane tank lamps we looked at earlier can light up a whole living room, or much of it, so people can sit farther apart.

But again they kick off a lot more heat, which you may or may not want depending on the season. It’s a trade-off of sorts.

The above should cover the majority of Amish home lighting situations. If you’ve ever found yourself in an Amish home in the evening, you might have experienced some of these firsthand.

We didn’t get into things like buggy lighting, lights in businesses, personal lighting, and so on. Maybe those will make good topics for future posts.