I didn’t plan on this becoming a series, but we’ve had a nice run of articles lately with Amish people sharing their lives and beliefs (see posts on Indiana Amishman John Gingerich and Illinois Amishman Reuben Mast).

I’ve enjoyed them, and hopefully you have too. It would be good to get a female Amish perspective soon, but men tend to do more of the talking to reporters.

I found this latest one particularly interesting, as Sam Shetler belongs to a Swartzentruber Amish church. Sam gave a talk at a library in Moniteau County, Missouri (reported in the local California Democrat paper).

Giving a public talk is not what you’d expect from a member of this very plain segment of Amish society, so that alone makes it noteworthy. 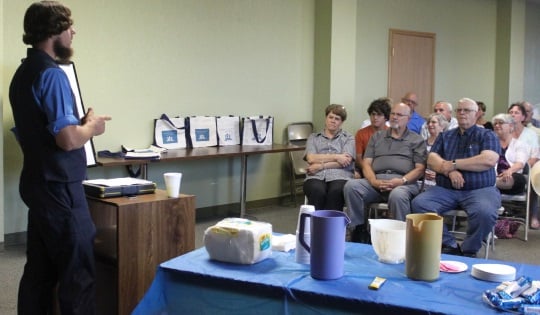 Factually, there are some errors in the article/talk, like the description of the Pennsylvania Dutch language, and the migration history details.

That aside, I found it most interesting from two perspectives – as an overall look at Amish beliefs and values, and also shedding light on how things are done in Sam’s Swartzentruber community.

Amish churches are at times criticized for supposedly being too focused on man-made rules.

The very slowly-changing Swartzentruber churches are arguably the best example within Amish society of adherence to strict rules.

Sam addresses the idea of rules versus principles, and distinguishes between the two.

He explains that principles are not to be bent, and likens them to a universal law of physics:

“It’s like the law of gravity,” he said. “You don’t walk outside your house one day and start floating. Gravity never stops and will never stop. The same goes for principles.”

Rules on the other hand, are more malleable:

Rules, however, can be followed as long as they are for the common good. This understanding means if the anabaptists needed to follow a governmental rule, they would as long as it glorified Christ and helped outsiders.

I would take principles here to mean Christ’s teachings and the Commandments, for example.

By rules, Sam appears to mean regulations and standards that the church has agreed will help preserve community, identity and help its members live more Christ-like lives – things like modest dress, and restrictions on potentially threatening technology.

Or – rules imposed from outside which do not conflict with their Christian beliefs, as Sam notes.

It seems in the news we see Amish clash a lot with authorities, often over regulations and ordinances which conflict with the ways some Amish live.

Follow enough of these stories and you might assume Amish have a naturally antagonistic standpoint towards government.

While that may be accurate of certain individuals and communities, Sam reveals his – perhaps surprisingly – positive attitude towards the state:

There are two kingdoms, and Amish see themselves as citizens of God’s kingdom. They feel they should pray for worldly leaders, but generally keep politics at arm’s length.

I’d say Sam’s take on those who wield power in the worldly kingdom is both humble and generous.

When disaster strikes, how do Amish provide for families who have suffered great material losses?

This is how Sam describes the insurance program as it works in his community:

If a barn is burned down, the minister of the church and two other members are selected to assess the damage and property. Once a dollar amount is set, the church pays 75 percent of the cost to repair the loss while the family in question pays out the rest.

He also notes that there is a “pool of money” marked for retirement.

This was not elaborated on, as to whether it’s community funds, or more family-level resources (though “pool” suggests it is contributed to and shared by the community).

While Amish traditionally cease formal education after eight grades, Sam has a healthy appreciation for the fruits of formal learning and those who pursue it:

“There’s a time and place for college, but I think most of us would realize it gets overdone,” he said. “That isn’t to say we are against it. I wouldn’t want to go to the hospital for a heart attack and have some 18-year-old who didn’t know what he was doing practice on me. College is sometimes necessary.”

Sam describes their version of higher learning as “puppy work”, a term I had never heard before. Just what is “puppy work”?

“We do hands-on experience,” he said. “A younger would work with an elder by getting experience and as the leader figures out they’re getting better, they go up the ladder that way.”

5. Phones are getting used more in his church

Phones in his community, as is typical in Swartzentruber churches, have customarily been intended for emergency use.

Sam gives an example of what counts as an emergency – “if we cut our hand off” (of course I had to wonder – and only half-jokingly – if just a finger or two would count…).

Ten years ago, Sam explains, phones were for calling doctors and veterinarians.

He describes how the stricture has loosened in recent times: “Today, phones get used a little more. We can use a neighbor’s phone, or some of us have a little booth at the edge of our property.”

That doesn’t give detail on what exactly an acceptable call might be now (to family living in another state, perhaps?).

But we see that even Sam’s Swartzentruber church has loosened their rules (note: there are several different Swartzentruber groups with somewhat differing Ordnung standards).

Sam hails from one of the plainest of all Amish communities.

But the mere fact of him giving this public talk, not to mention the ideas he expresses, suggests that one word popularly used to describe Swartzentruber Amish – “insular” – feels like a poor fit here.

I would have enjoyed attending this talk.