Unlike the typical Catholic priest or Protestant pastor, the Amish minister is unpaid and does not take up formal theological training.  Ministers are selected from among the baptized males of the church, in an often emotional process of voting and drawing lots.  They are in many ways responsible for the spiritual welfare of their church (more on Amish church districts).  Thus being a minister is a formidable duty.

Accordingly, ministers command respect from other members of the church.  Amish lay members often speak in glowing tones of their leaders.  In other, less-common instances, grudges may develop in situations where members disagree with church rules or a bishop’s heavy-handed ways.

Ministers are responsible for preaching on Sundays.  Saturday afternoon is often a time of preparation and study for the next day.  Again, this is unpaid and the minister must fit this in with his familial and work duties.

The preaching experience itself can be quite powerful.  Just as among the English, different preachers have different styles.  Some rely on repetition to make their points.  Others become visibly emotional.  I recall a sermon I was witness to in Ohio.  Though I couldn’t understand the Pennsylvania Dutch, it was obvious that the preacher was visibly moved by his message, becoming teary-eyed at one point.

Preachers draw on everyday experiences as well as stories from the Bible to convey their messages.  The New Testament is emphasized.  In Amish Grace, authors Kraybill, Nolt and Weaver-Zercher point out that ‘although Amish preachers recite Old Testament stories in their sermons, all the biblical texts read in Amish church services come from the New Testament,’ particularly Matthew, Mark, Luke, and John, as ‘out of the sixty chapters in the Lancaster Amish lectionary, forty come from the four Gospels’.

After preaching concludes (there is typically a shorter sermon, and then a longer one, which runs around an hour), other ministers often add their own commentary or correction.  In this way the Amish service is a collective effort, an idea also supported by the fact that preaching duties rotate among ministers. 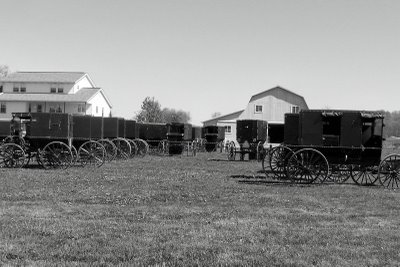 The typical structure of the Amish ministry is one bishop per church district, assisted by two or three ministers, and a deacon who handles some behind-the-scenes duties and may read in church, though rarely preaches.  Lancaster County is slightly different, with one bishop typically handling two church districts.  Membership in the ministry is for life.

Often when a church splits, a bishop will continue to tend the spiritual needs of both of the districts, until the new one can select additional ministers, if need be, and then a bishop from among those ministers.  The ‘extra district’ in this case is sometimes referred to in Amish church directories as an ‘annex’ district.  Amish in the annex district say that Bishop XYZ is ‘taking care of’ our church.  It may take a year or two before a new district has full ministry in place.

Interestingly, in some Amish districts, you may actually find more than one bishop.  This may be the result of a move from one district to another, but is more likely due to the fact that bishops reach an age which is essentially ‘retirement’, at which point a new one is selected.

According to the 2008 Calender/Almanac, in only two of around 1600 Amish churches—one Iowa Amish congregation, and one in Indiana—will you find three bishops residing in the same district, though in the unusual example of the Amish community at Pinecraft, Florida, there are currently four bishops.  This is likely due to the fact that Pinecraft is something of a retirement/vacation community for the Amish, attracting families from various locations around the country.