Across America in places where the Amish have set up shop, local businesses and government authorities have had to adapt some practices to accommodate the preferred Amish transportation. 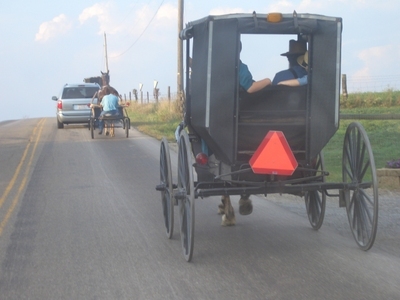 Sometimes an Amish group showing up in an area can lead to disputes with locals over horse mess or hoof damage on roads.  The smarter businesses, or at least those that hope to attract more Amish customers, usually get a hitching post up in front as soon as possible to make themselves buggy-friendly. 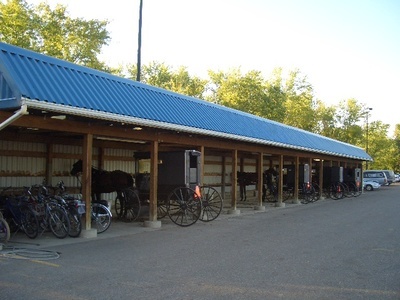 Road signs warn drivers of the presence of buggies.  The designs of such signs are specific to state and even individual community.  Stephen Scott’s Plain Buggies contains photographs outlining the differences in buggy warning-sign design in states such as Ohio, Delaware, New York, and Pennsylvania.  Generally they all consist of black silhouettes on a yellow background, but with different artists’ renditions of the vehicle.  Why the difference?  Perhaps due to the fact that they are maintained by state and local authorities rather than a federal body which might be expected to produce more uniform signage. 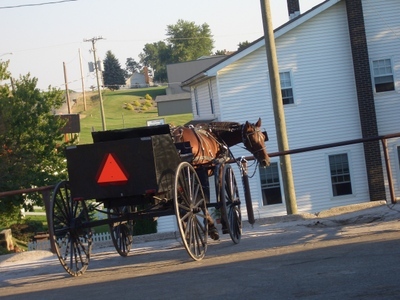 In certain Amish communities, such as that of Allen County, Indiana, the buggy silhouette on local signs is a crude approximation of a topless carriage, as Allen County Amish use only this type. 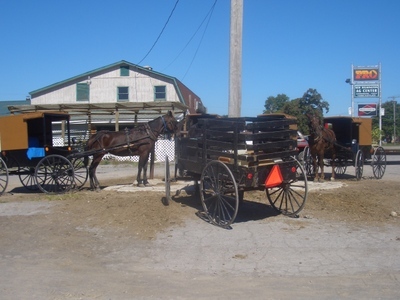 Most Amish conform to law by utilizing some form of reflectorized material or lighting to warn drivers of their presence.  Most find this to be a sensible compromise–they allow their transportation to be adorned with a man-made symbol, yet benefit from increased safety, while promoting the safety of car-drivers as well. 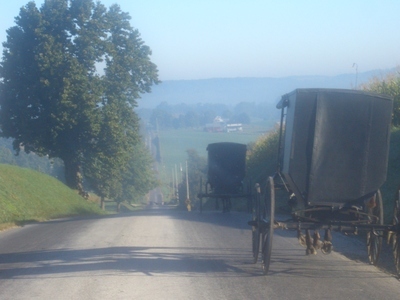 Interestingly, the Swartzentruber Amish are among the only groups which refuse to use the familiar slow-moving vehicle triangle, while the ‘white-top buggy’ Nebraska Amish, considered by some to be the most conservative of all Amish, choose to use the triangle.  The Swartzentrubers have been criticized for this not only by outsiders but by higher-order Amish as well. 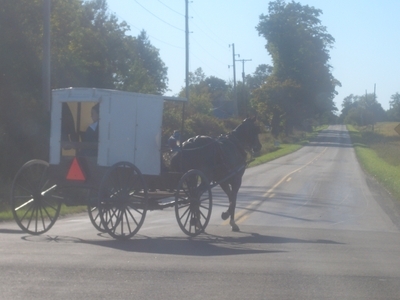 At night, bicycle riders will often trail directly behind buggies to benefit from the safety offered by the buggy’s size and blinker system.  Some of these buggies are extremely well lit up. Yet lights are not a foolproof measure of protection. 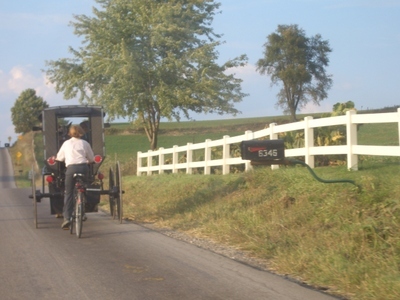 I recall stopping my truck at dusk to offer help to an Allen County, Indiana family whose battery had gone out.  I had barely seen their darkened open carriage and suggested that I drive behind them to give them a little bit of protection until they reached home.  They kindly refused, as apparently they were already near their destination, and the road was just a secondary gravel road.  Good it wasn’t a main one. 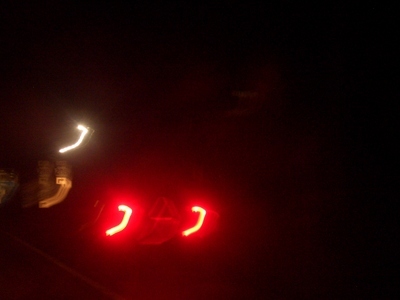 Despite driver awareness, lighting and reflectors, buggies are still frequently involved in accidents with automobiles.  I’ve had a few close calls myself.  The trickiest thing is underestimating the speed at which they travel.

Buggy lights appear quite similar to car lights–which is good and bad–good, as you realize that something is there, bad in that you often expect whatever it is to be traveling as fast as a car, until you realize that it’s not a car at all.