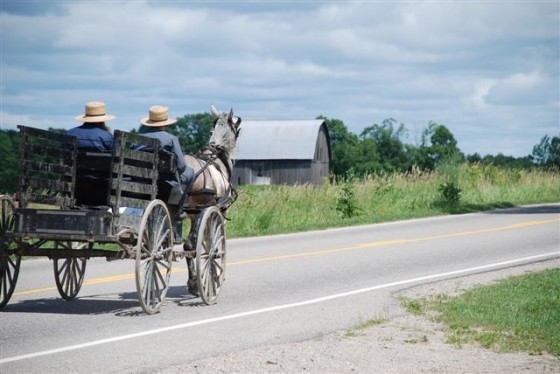 If you keep an eye on the news feeds, every couple weeks or so, a story about a road accident involving Amish pops up.  Reader Sherry recently wrote a moving post about such an accident in a Michigan Amish community.  Driving a buggy is a hazardous activity, more hazardous in some Amish settlements than in others.

For example, the largely rural Amish communities of northern Indiana and Holmes County generally have wide, even buggy-width, shoulders on the main thoroughfares traversing the settlement.  This is certainly not true of all the roads, however.

In other settlements, especially newer and more urbanized ones, roads are not as conducive to carriage travel.  In some communities, such as Allen County, Indiana, Amish have carved out crude side lanes on neighboring farmland, for short stretches along some of the busiest highways, allowing a degree of safety.

Hills are another hazard.   Holmes County is a community where hills cut down driver vision, and they have been a factor in numerous accidents.  Amish buggies travel at a deceptively slow speed, roughly 5-8 miles per hour on average, sometimes 10 miles per hour when traveling at a good clip.

Ten miles per hour is approaching top marathon runner speed, but with cars traveling 50 mph or more on some country roads, that is of course nothing.  As readers who’ve driven in Amish country know, you really come up surprisingly quickly on even the fastest-moving buggies.

Compounding the hazard, some Amish do not use the slow-moving-vehicle triangle accepted by the majority of Amish, most notably Swartzentruber Amish groups.  The triangle helps even in the daytime, when a dark buggy can blend with objects on the horizon.

A few years back, I did a post on one such buggy accident in Ohio.  Ironically, I was on the way that morning to interview an Amish businessman who was also an EMT.  When I arrived at his home, he had actually just returned from the scene of the accident, in which a girl was severely injured.