I have a friend here in the Amish settlement at Holmes County.  He’s relied on a wheelchair for some years.

Whenever I stop by ‘Aden’s’,I get a fresh dose of perspective. I don’t think I know a more positive person.

‘We have so much’ Aden tells me. ‘You can’t walk’, I think to myself. ‘How can you be this upbeat about life?’

Aden makes a choice everyday. He chooses to focus on the positive. He’s got a wife and daughter and a business he can operate from home. He’s got other family around that support him. He just built a home with no stairs, making getting around a lot easier. 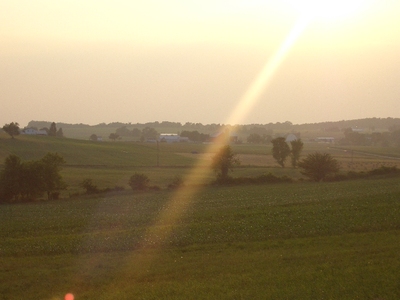 Aden is not totally paralyzed. He can limp and hobble around his shop. A few feet this way, a few that, all the while leaning on tables and work benches that line the walls. His arms work great. But his battery-charged wheelchair has basically replaced his legs, zipping him between home and workspace.

Aden loves people. ‘That’s what it’s all about’ he says.

Aden is clearly focused on what’s beyond this life. ‘When Christ comes, we want to be with Him.  We don’t want to be left here.’

Aden expects the joy of heaven to be incomparable to what we have on Earth. ‘We won’t even be able to imagine it’.

Amish have gotten a lot of attention from non-Amish society in recent times. I mention how the Amish often have a positive impact on others through their example.

‘We are supposed to be a light for God’ he says.  But Aden knows that’s not just a role for the Amish. He says there are good people everywhere. We’re just born into different cultures, he explains.

If you wanted an example of a spiritually convicted, uplifting person, I would point to Aden in a heartbeat.

He truly lets his light shine.