Amish might be the last people you’d expect to see on a sports field.  But Amish do enjoy a wide range of sporting activities.  At the same time, sports are controversial among some Amish, who see participation by adults as immodest and sports best reserved for children.

There is a variety of opinion in Amish society on sports.  A wide range of sports are enjoyed in Amish communities, by children, youth, and in some cases adults.  Below, a look at the types of sports Amish play, Amish opinions on the acceptability of sports, and sports fans among the Amish.

Acceptability of sports among Amish

Sports and games are generally seen to be acceptable among children.  Amish children may play ball games and softball at school.

Many Amish youth participate in sports to varying degrees.  Most Amish children play softball at school during recess.  Some continue on to join organized leagues, a practice that has been controversial.

Adult participation in such leagues is generally frowned upon.  However some adults will play sports casually with their families.  Generally, sports participation is expected to decrease when an Amish person gets married.

Softball is played by Amish children and youth

Softball is typically played by Amish children at recess.  Unlike in non-Amish society, competition is de-emphasized and group participation promoted.  In later years, Amish youth may play on teams in local competitive softball leagues.

Amish teams may enter tournaments and have even reached success on a national level.  Youth participation in competitive leagues as been controversial in some areas, due to the league’s promotion of competition, use of uniforms, and play on Sundays.  Adults are generally discouraged from play in organized leagues, though it occurs in some communities.

Volleyball is very popular among Amish.  Driving through a typical community it is very common to see nets strung up on lawns, particularly on the weekends.  One reason for volleyball’s popularity is its place in Amish youth social life.

Volleyball is a game typically considered acceptable for both boys and girls to play together.  At an Amish youth singing, there may be as many as four or more nets strung up with intense games, featuring mixed-sex teams, going on at any one time.

At the end of each game, teams line up and slap high-fives, congratulating the other side’s effort.  Married Amish adults may occasionally participate in youth volleyball games as well.

Hockey is a game popular in colder climates, and particularly in Pennsylvania.  Frozen ponds offer good venues for hockey.

Amish youth have also taken to playing in organized leagues, as with softball and baseball.  An Amish hockey player made news after assaulting a referee at the end of one game, an incident which no doubt strengthened the criticisms some Amish adults have for youth participation in organized sports. 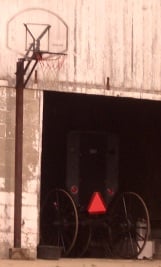 Basketball is a game particularly popular among Amish in Midwestern states such as Ohio and Indiana.  It is quite common to see basketball hoops in Amish driveways or hung on the sides of barns.

An Amishman in Indiana has even constructed an enclosed gym on his property.  Basketball is less common than softball or volleyball, but remains one of the more popular sports among Amish.

A number of lawn games are popular among Amish, and which make nice recreational pursuits for both children and adults.  Lawn croquet is popular in the Lancaster County Amish settlement.

The beanbag tossing game “cornhole”, in which players take turns attempting to land beanbags on an opponent’s target, an inclined piece of wood with a hole cut in the middle.  Cornhole is popular among all ages and may be played by adults at cookouts, for instance.

Cornerball is a Pennsylvania Dutch favorite, long played in barnyards by Amish and Old Order Mennonite youth.  The game of cornerball is somewhat like dodgeball, and is played with a smaller, hard ball on straw spread on barnyards.

The straw allows for a softer landing, as players frequently jump, spin, and dive to avoid being hit by opponents’ throws.  Read more about cornerball. 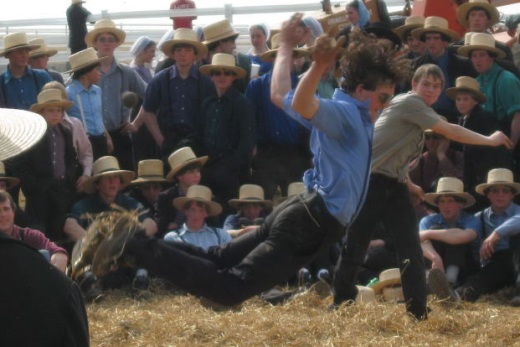 Cornerball is played by Amish and Mennonites in Lancaster County

Some Amish take an interest in sport from the spectator’s perspective.  Amish may follow professional sports such as football and baseball.  While trips to games are rare, Amish will keep up with a team’s progress through the newspaper or may catch games on the radio while traveling to and from a jobsite. Youth are apt to be more open about their interest in professional sports teams.

As with other fans, Amish typically support the regional team.  Holmes County Amish are likely to support teams from Cleveland or nearby Pittsburgh, while Illinois Amish back Chicago or St. Louis clubs.

Generally, sports are seen as acceptable for children and youth in most cases, and less so for adults.  An Amishman writing in the publication Family Life stated strong opinions against sports, compiling a list of 9 reasons why Amish should be wary of participating in them, including “Sports Destroy a Sense of Modesty”, “Sports Detract from Worthwhile Things”, and “Sports emphasize pleasure”.

Yet other Amish see less potential for harm in sports participation, some noting that there are worse activities youth could be involved in.  One Amishman describes sports to be “seen as child’s play with the proper emphasis being on learning fair play and the development and exercise of the growing body.  Children playing together or adults playing with children is fine.  The negatives usually begin when participation in organized and competitive sports take priority over faith and family.”

Summarizing the variety of opinion in Amish society, he adds that “basically most Amish agree that there is a point where too much involvement is harmful.   They just are not agreed where that point is.”

“Why I See a Danger in Games and Sports”, anonymous, Family Life, March 1982