Four youth of the Chautauqua County, NY Amish community were arrested for illegal alcohol possession last Sunday. Normally I don’t find the mundane “Amish behaving badly” stories all that post-worthy, but this one has been getting so much coverage I think it’s worth mentioning.

Scouring the web I’ve found reactions usually land in a few categories: 1) If they weren’t Amish, this wouldn’t be a story, 2) The Amish drink?(!), and 3) There go the Amish again, having their crazy Rumspringa. 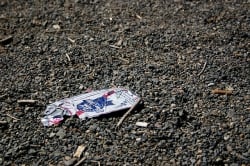 As to the first point, I’d tend to agree, except this story is particularly egregious–not only were the 4 youth caught drinking underage and drag racing their buggies, but they ended their escapade by slamming into a police car.

While I’m sure this story has gotten a big boost of coverage owing to the religious identity of the perpetrators, imagine a similar story about 4 non-Amish youth drag racing and somehow managing to crash into a cop car. It sounds like something out of a bad movie. And a little hard to believe (if you’ve got to hit something, maybe choose something that can’t arrest you?).  The piece de resistance of the story comes in the final line: “Police say several other buggies fled the scene.”  Do we laugh or cry?

Secondly, I think a lot of people don’t realize that some Amish do drink alcohol. It is true some Amish are teetotalers.  For others, homemade wine is just a part of the culture, enjoyed in moderation or for “health reasons”.  And some communities have real problems with alcohol, not just among the youth.

Finally, some Amish communities also have real problems with youth behavior. Amish respond in different ways–some by moving away to “calmer” settlements, others by getting adults more involved in youth activities (such as the numerous adult-supervised singing groups in places like Lancaster County).  But this behavior shouldn’t be seen as par for the course for Amish youth.  Rumspringa is often misportrayed as a time of waywardness and sin.   For some that is the case, but for a lot, no.

I’d bet the NY Amish parents are pretty horrified by what happened.  Hopefully the young folks aren’t thrilled by the national media attention either. Maybe the shame of such a story will resonate with Amish youth in other communities. Then again, knowing how young people think (“it can’t happen to me”), I kind of doubt it.