What happened to Sugarcreek?

A couple of decades ago, Sugarcreek was the major shopping and dining area in Amish Country. Not so much anymore. The Amish tour train no longer operates. The ice cream shop is no more. I don’t understand why Sugarcreek is losing favor with tourists when it is so close to I-77. Perhaps someone else can explain.

I just read a book which addressed this very question.  Selling the Amish: The Tourism of Nostalgia by Susan Trollinger investigates the phenomenon of Amish tourism by examining 3 tourist towns in the Holmes County OH settlement.

In line with Cherie’s observation, the author finds that while tourism is flourishing in the nearby towns of Walnut Creek and Berlin, it has deteriorated in Sugarcreek. 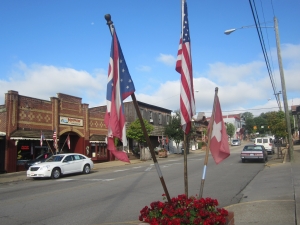 US, Ohio, and Swiss flags are displayed throughout Sugarcreek

Beyond the closing of the popular train line, Trollinger sees more primal causes for the decline of tourism in the town.  We might not be conscious of them, but there are deeper forces drawing us to Amish Country tourism, and Berlin and Walnut Creek in particular.

The argument is more intricate than I can do justice to here, but generally speaking she finds that the towns of Berlin and Walnut Creek present a more positive, forward-looking vision for visitors. More specifically, Walnut Creek with its “Victorian” theme, and Berlin with its “frontier” theme

encourag[e] visitors to “remember” the past in romanticized ways and then to imagine a better future that is based on that romanticized past. They inspire tourists to experience nostalgia not so much for the past but on behalf of a future that takes its shape from that highly selective and idealized past (Selling the Amish, p. 134).

In contrast, she writes, “While a visitor may experience nostalgia in Sugarcreek, the longing that it inspires is for a past that is forever gone” (p. 135).  It is an interesting argument and I don’t want to give away too much here, but if you want to learn more about the phenomenon of Amish tourism I’d recommend the book.

I do like Sugarcreek.  With the ever-present Swiss motif there is an element of kitsch about the place, but I am partial to kitsch in doses (for the record I don’t see “kitsch” as a necessarily bad thing). 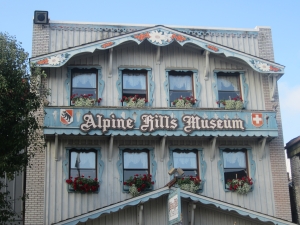 A typical facade of buildings in Sugarcreek’s Swiss Village

On a more superficial level, my perception of a place is also influenced by its name.  “Mudtown” or “Migraine Heights” sound a lot less inviting than places called “Sugarcreek” or “Mount Hope”.  The name of Sugarcreek has always had a romantic appeal in my mind.

Beyond the arguments presented in Selling the Amish I also wonder about a more basic reason for the town’s tourist struggles.  When I visit a new place my instinct is to go right to the heart of the action, whether that’s a new city, museum or Amish community. 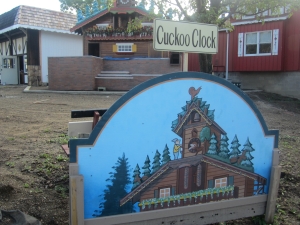 The “world’s largest cuckoo clock” came to Sugarcreek in 2010

While it’s true that it lies near Interstate-77, Sugarcreek appears on the edge of most “Amish Country” maps acquired by tourists, given that it lies at the eastern end of the settlement.

Also, traveling through town on Route 39, to reach the Swiss Village area you have to detour off the main road. These are probably not the main forces behind Sugarcreek’s tourism struggles, but perhaps contributing factors.

Have you visited Sugarcreek?  What were your impressions?  Why do you think some tourist destinations are more popular than others?