I was sad to learn yesterday that my friend Mose Smucker is shutting down his sandwich and meats business at Reading Terminal Market in Philadelphia after 12 years. A new city vaccine mandate on food establishments (taking effect January 3rd) means The Grill @ Smucker’s will shut down for good on New Year’s Eve.

Mose, who is 70, made it this far but it looks like with this latest requirement he has had enough. Via the Philadelphia Inquirer:

“I have to get away from all these mandates,” said Smucker, 70, who started the stand as his “retirement job.”

Before joining the Old Order Amish section at the historic market, he operated a harness shop on Route 23 in Churchtown for 38 years, providing tack for a who’s who of clients, including the Budweiser Clydesdales and the horses of Ringling Bros. and Barnum & Bailey Circus.

Asked if he had family to continue the stand, he replied: “They’re all too smart to be in this business.”

That’s his trademark humor. We haven’t spoken on this, but I’d say it’s not even necessarily the case of whether Mose has an issue with getting the vaccine or not. It’s also about whether he would be able to find enough workers for his business as well. As we’ve looked at earlier this year, Amish as a whole have been reluctant to get vaccinated, in part due to a belief that the majority have had COVID already.

I first wrote about Mose on this site in 2010 when my Amish business book was coming out. He was one of several Amish entrepreneurs whom I introduced to a reporter for a Time magazine piece on Amish business. 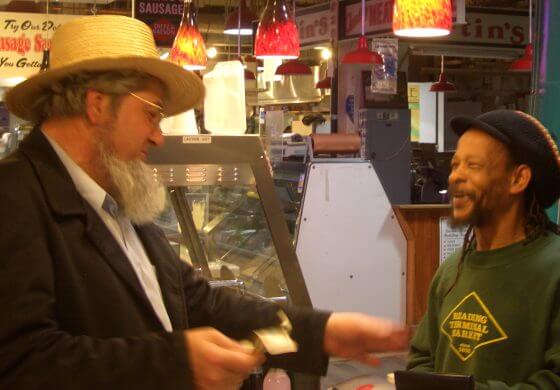 Mose Smucker at his market stand, 2010

Here’s an excerpt from that article, written in the early days of The Grill @ Smucker’s, when no one could have predicted that one day a health law would lead to its end:

The Amish have also learned to work outside their enclave–outside their comfort zone, in B-school parlance. That takes the kind of flexibility displayed by Moses Smucker, 59, the owner of two businesses in Reading Terminal Market in Philadelphia. Smucker, a big man with a bushy beard and a straw hat, starts his day a 55-mile (about 90 km) van ride away in Lancaster County, waking at 4 a.m. to feed the horses. “I come down here, and I adapt to this,” he says. “I go home, and I adapt to that.” Doling out packages of liverwurst, headcheese and beef jerky, Smucker is a born salesman. “This place doesn’t know what hit ’em,” he says. “I yodel, I whistle, I sing.”

No word on what the other Amish-owned businesses in Reading Terminal Market and other Philadelphia Pennsylvania Dutch Markets are doing. I suspect they would have similar issues to what Mose has faced.

Ethridge, Tennessee
1500 Amish in the Heart of the South
Recent Articles
Get updates via: RSS