Hunting: Not just for Amish Men

As we’ve noted before, some Amish are avid hunters. Hunting is not just for the guys, however.  In a column titled “Shotgun Season opens on deer”, Lovina Eicher, aka The Amish Cook, describes her girl’s (or is it girls’?) involvement in hunting:

Our daughter, Elizabeth, doesn’t have to work today. Her factory is closed so workers can take advantage of the opening day of the shotgun season on deer. Elizabeth will go hunting with Timothy, and our other daughter, Susan, will accompany her friend, Mose. Joe will hunt tomorrow. He and the boys were practicing last night with the target. 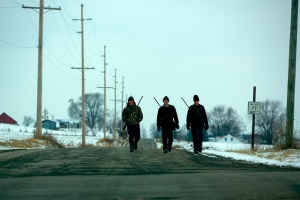 I first became aware that some Amish females hunt too, when the teenage daughter of a friend eagerly described a morning out hunting with her brothers.  She has 8 of them, which may partially explain her interest.

While hunting is generally accepted by Amish, you may hear voices against it. Objections concern money spent on the sport, the idea that it is an idle pleasure, or questions over a non-resistant people using guns.  As a rule, Amish use the meat of the game they shoot.

If hunting is not your thing, you may want to check the column anyway, for Lovina’s gooseberry pie recipe.  Thanks to an invite a couple of years ago via Lovina’s editor Kevin Williams, I have had the pleasure of tasting Lovina’s desserts straight from the source, at the Eicher home in Michigan.  But I don’t have to tell you this is good stuff.  Lovina recently shared a batch of favorite Thanksgiving recipes as well.