MinnPost.com has an interesting article exploring the stories of two Amish-raised women who decided to leave their Amish lives behind.

The main focus is on how these women –  Susan Miller, 21, and Rebecca Swartzentruber, 36 – are now getting an education and pursuing goals outside their birth communities. 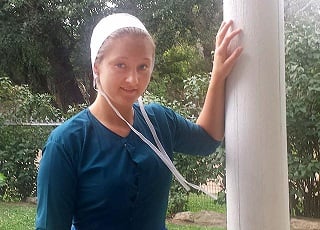 The women have enrolled in the Hawthorne Education Center in Rochester, Minnesota. This is a stone’s throw from the state’s largest Amish community at Harmony (a conservative Swartzentruber Amish settlement).

Hawthorne specializes in adult education, helping those who dropped out of high school to get their GEDs among other things.

According to the piece Hawthorne has 5-10 formerly Amish students each year. Both Miller and Swartzentruber are aiming for health care jobs.

Rebecca was the 7th of 15 children (a large family even by Amish standards).

As is not uncommon in Amish farming households, girls may help with more traditionally “male” tasks outdoors. From the article:

Girls were expected to help out with the outside work, she added, but boys were forbidden from helping with the cooking and cleaning. “More was expected out of the women … because we were expected to do both,” she said.

I haven’t heard much of boys being forbidden to help with indoor “female” tasks. Though I’m not surprised this might be the case here, as it sounds like Rebecca comes from the very plain Harmony community.

I am close with a couple of Amish families who have only boys in their families. And they help out with dishes, etc. Mom probably wouldn’t have it any other way. They are from “higher” churches however.


Rebecca recalls spending a lot of her free hours working to contribute to the family – crafting quilts or baking. However there was still time for personal interests. I liked this part:

On Sundays, when no official business could be conducted, she remembers reading whatever she could get her hands on. “Us girls somehow always got our hands on those romance books,” she said, smiling. “But if we’d been caught with them, we’d have been in big trouble.”

Rebecca married when she and her husband were still in the community, but they left in 2002. So Rebecca has spent most of her adult life outside the community.

Interestingly, Rebecca says they did not face the typical church discipline that one would expect when they left:

“We both decided we wanted more out of life,” she said. “So we came to the agreement to leave one night. It was hard on the families, but we didn’t get shunned, like they normally do.”

Why this was the case is unexplained. The couple sometimes return home for visits.

Eventually Rebecca found her way to Hawthorne, and tested out at a fourth-grade level. She got her GED, then finished the CNA program, and now has her sights set higher:

She’s currently taking some preparatory summer classes at Hawthorne because she was accepted into the hemodialysis tech program at the Mayo Clinic School of Health Sciences.

“My long-term goal is radiology,” she said. “Because when my youngest was 3, he broke his leg. They took X-rays. I’d never been around X-rays before. They let me be in the room with him, showed me everything. That’s what got me hooked on radiology — to be able to see people’s bones and that stuff.”

Susan Miller also came from a large Amish family, as the 4th of 11 children. She grew up in Michigan in an unnamed community and later moved to a more conservative settlement in Nebraska.

Susan went to work in a bakery after finishing the eighth grade. Susan realized she did not want to follow the traditional path in adulthood however:

“I always felt like if I just stayed Amish, I’d get married and have all these kids,” she said. “They’d go to eighth grade and be expected to … it was not the life I wanted.”

Susan had what you might suppose to be an advantage for someone wishing to leave, in that her older siblings had already left the community.

She didn’t find the support she might have wished for, however:

Once she made up her mind to strike out on her own, she got her hands on a cellphone and texted a few of her older siblings who had already left. But she already knew, from writing to them before, that they didn’t approve of her decision. They felt bad for their mother, she said, so they had encouraged her to stay, even though they refused to go back home themselves.

Susan ended up in Rochester at age 17 and worked jobs at a hotel and apartment complex, “where she worked on smoothing out her German accent, she says, because she had only been allowed to speak in English at school.”

Susan eventually found her way to Hawthorne and tested out higher than Rebecca, at a 7th-grade level. She found a supportive setting at Hawthorne:

She credits her teachers and advisers at Hawthorne for not giving up on her. They’d call and text when she didn’t show up to class, she says, admitting there were times in the beginning when she’d doubted her abilities. And they were extremely patient with her as she struggled to learn how to work on the computer, she added.

Miller also did her GED and then finished the school’s Certified Nursing Program. She continues her medical education online and aims to find work at the Mayo Clinic or somewhere similar:

“I always, as a little girl, said that I wanted to work in a nursing home, even though I didn’t have a full vision of what it would be,” she said. “I knew it’d be taking care of people. Now that I am a [Certified Nursing Assistant], I want more. Now I want that hospital environment.”

There’s no mention of Susan’s current relationship with her family.

As we’ve seen in numerous other stories, for whatever reasons – faith questions, desire for formal education, attractions of technology, yearning for  a different style of life – not every Amish-born person fits an Amish life.

For those who figure this out sooner than later, the path forward is theoretically less fraught, at least as to how it relates to one’s home community.

Church discipline is supposed to come into play only for baptized members (though in practice, even unbaptized people can feel the effects on their relationship with family).

In any case, it’s nice to see these women on the path they feel is right for them.