The body of ex-Amishman Eli Stutzman–convicted of one murder, suspected in four others–lies in a Texas morgue, unclaimed by his former Ohio Amish community.

Stutzman’s DNA may be the case-breaker in the 1985 deaths of two Colorado men.

Gregg Olsen, author of Abandoned Prayers, commented on the case which has hounded him for the past 20 years.

Olsen shares an interesting idea–if Ida (Stutzman’s wife and supposed first victim) hadn’t been Amish, there would have been a full investigation of her death. 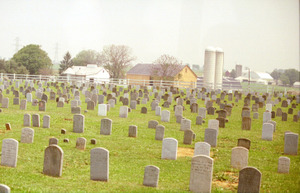 We often perceive the Amish as above blame.  As many Amish and ex-Amish insist, however, they are just like the rest of the world.

Violent crime such as murder is rare in Amish society.

In the 250-year-old Lancaster County settlement, the only other killing in memory (besides the Nickel Mines shootings) occurred when an Amish woman was murdered by a non-Amish neighbor in 1982.

Why does the Amish-violence mix get so much attention?

The Amish are famously non-resistant.

One Amishman, in demonstrating principles of non-violence,  submitted to massacre by Indians in the 18th century.

Amish took physical and verbal abuse as conscientious objectors during the World Wars.

It’s the seeming incongruities, like Amish and violent crime, that get attention.