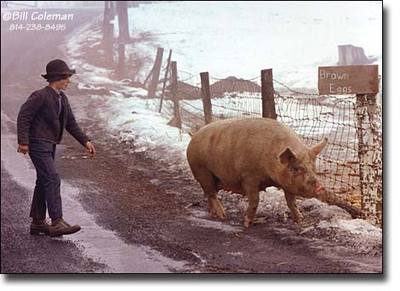 The clear majority of farms operated by the Amish are of the less-stinky dairy variety.  Hog farms are much less commonly run by Amish, but you do see them from time to time.  In Lancaster County there are just a few.  Northern Indiana, as in Lagrange and Elkhart Counties, also has a handful.

North Carolina, where I grew up, is one of the most ‘hog-ified’ states.  And you can’t miss that smell.  I’ve never understood how hog farming families can get used to it (or their neighbors, for that matter–and judging by the outcry that some non-hogging landowners put up over the presence of these farms, many don’t).  The hog farm smell has just got to be one of the worst there is.

Not to get too nasty, but the smell of the typical dairy farm you can actually get quite used to–it’s much more earthy and subtle (wait a minute, am I describing a farm or a fine wine here..?).  The hog farm stench, on the other hand, sort of pops you in the face.  It’s anything but subtle.

Poultry farming is also seen among some Amish.  The northern Indiana Amish do chickens and ducks.  Those types of farms emit fairly terrible odors as well.

But the worst ‘country’ smell of all, (at least for these olfactory receptors), worse than even the paper mills and the landfills, has to be that of the rendering plant.

A rendering plant will often set up in a rural area as a sort of ‘post-processing’ center for animal byproducts like blood and fat and feathers.  The rendering industry’s magazine, Render, tells us on its site that the industry produces ‘beneficial commodities including tallow, grease, and protein meals.’  Yummy.

I remember in Ohio a couple years ago being smacked in the face by a horrific rancid smell while stopping in at an Amish dairy.  I recall the young Amish guy I was talking to sort of rolling his eyes in disgust.  ‘The rendering plant’, he muttered, gesturing off in the distance.  Apparently the wind had started blowing in the wrong direction.

I can understand how these smells can affect real estate values.  Looking to move to the country anytime soon?  Might be worth driving around and checking out the neighbors.  Otherwise you might find yourself wearing nose plugs more often than you’d have wanted.