The Amish and home birth

Does the stork make home deliveries?  For many Amish families, the answer is yes.

Birth at home, or in Amish-oriented birthing centers, is preferred for a few reasons.  They include cost, comfort, and closeness to family.  Midwives, some licensed, and others not, often handle deliveries in lieu of a doctor.

Midwives may be non-Amish, or in some cases come from within the Amish community.  In Housecalls and Hitching Posts (telling the story of Dr. Elton Lehman’s career among the Holmes County Amish), an Amish midwife named Barb Hostetler delivers Amish and Mennonite babies in her home, and even some from non-Amish women.  Lehman ends up partnering with Barb to help deliver hundreds of Amish children in a home setting. 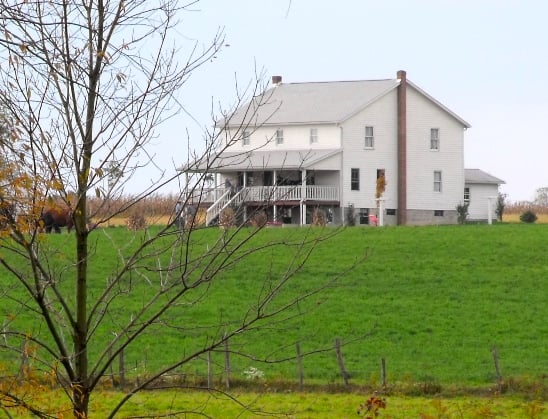 Birth at home provides a comfortable setting for many Amish mothers

However, many Amish do opt for hospital births.   In An Amish Paradox, Charles Hurst and David McConnell cite some figures for the Holmes County settlement.

As one might expect, the moderate and progressive Old Order and New Order Amish affiliations choose hospital births more often–nearly 3/5 of the time.

For their highly conservative Swartzentruber Amish neighbors, however, the figure is much lower, with around 1/5 of Swartzentruber births occurring in hospitals.

The home birth issue has been controversial.  Two of the main issues are licensing and the level of care received.  Doctors may be present or reachable during a birth, though in many cases midwives are the only ones in attendance.

The Holmes County settlement is also home to a handful of birthing centers, some of which are more “medicalized”, as Hurst and McConnell describe it, than others (meaning having doctors and nurses available and following a “mainstream medical model”).

Less-medicalized settings have faced criticism.  Referring to an unlicensed care center, a doctor quoted in An Amish Paradox says that “We see a lot of bad cases come out of that one…We would blame it of course on the fact that there aren’t well-trained midwives there.  I suppose just being farther away from the hospital makes it look worse too, because it takes longer to get somewhere.”