Following yesterday’s post on the Ohio Amish shooting, there was some discussion on the group of Amish victim Rachel Yoder belonged to.

Rachel was apparently a member of the Andy Weaver Amish, which is colloquially known as the “Dan” Church (thanks to Michigan Mary, who was about a mile away at the time of the shooting Thursday, for filling in some gaps).

Rachel’s home community of Holmes County is unlike other large Amish settlements like Lancaster County and N. Indiana in one way: it is home to numerous Amish affiliations (if you’re wondering what terms like ‘affiliation’, ‘settlement’, and ‘district’ mean, try this short explanation).

Lancaster County and Northern Indiana are more-or-less comprised of a single unified group each.  While there are differences among church districts in those communities, there has not been anywhere the same degree of division and formation of new groups as has been seen in Holmes County.

A brief outline of the 4 major Amish affiliations in Holmes County:

New Order–  This is a more “mission-oriented” offshoot from the Old Order which emerged in the 1960s.  They also dress plain and use the horse and buggy like other Amish. 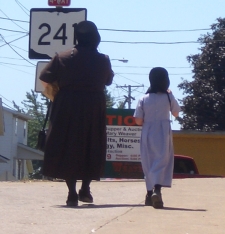 Andy Weaver– Between the Old Order and Swartzentruber in technology used and degree of conservatism.   Near 15% of the total Holmes Amish population.  Read more on the Andy Weaver Amish affiliation.

The names above are a bit misleading;  in a sense you can consider all of these groups “Old Order”.  In addition to these, there are about a half-dozen other subgroups in the Holmes County community which are typically offshoots of the affiliations listed above.

The circles are distinct, although that doesn’t mean that Amish don’t interact on many levels, including in the workplace, mission activity, and at events such as weddings, auctions and funerals.  An Amish Paradox does an excellent job detailing the differences among these groups.