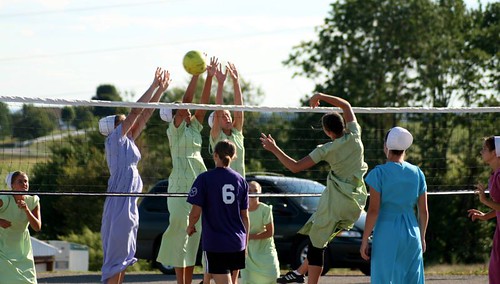 Amish also enjoy competitive team sports. This photo, taken by Holly in Mount Hope, Ohio, illustrates one of the most popular.

Amish typically play sports as children and as members of the youth. On marriage and having kids, participation in sports tends to drop off markedly. It’s also worth remembering that different groups of Amish may have differing opinions on the matter of sports.

Generally though, Amish do enjoy playing sports and even following pro teams. Softball is particularly popular, as an entertainment for children during breaks at school, and also with Amish teens, who play against non-Amish teams in competitive leagues.

You’ll find a decent amount of Bears fans in the Amish settlement at Arthur, Illinois, though not too many that actually play football. One Amishman in southern Indiana has built a gymnasium on his property for pick-up basketball games in a nod to a sport that’s particularly popular in his settlement.

Holmes County baseball fans tend to pull for the Tribe, though some may be tempted to root for the Pirates just over the state line in Pittsburgh. Lancaster County Amish enjoy hockey, skiing, and in warmer months, croquet. I haven’t been able to find any Amish snowboard enthusiasts yet but I’m sure there must be some out there.

Most Amish who do follow sports manage to keep up with their favorite teams through the paper. But do the Amish ever get a chance to watch games?

An outing to the ballpark is uncommon, but does happen. Amish may also catch a game on the tube–perhaps at a non-Amish friend or relative’s.

But don’t expect to see too many bearded Plain guys crowded around piles of chicken wings at the local sports bar. You have to draw the line somewhere.