Amish from Ohio, Pennsylvania, and Indiana visited the President and Vice President in the Oval Office Friday, as reported in the Washington Times.

This was apparently the first time Amish people have visited the White House in this capacity (with one possible exception, see below).

The Amish as a whole are not overtly political, so this type of event gets attention.

While relatively few Amish visit the ballot box (you frequently hear that instead of voting, Amish prefer to pray for the country’s leaders), there are some politically active people among the Amish.

The group which visited Washington Friday contained several of them. I found this article interesting as it gives some insight as to why Amish support the president.

Why do Amish support President Trump?

The Amish PAC was started in 2016 to generate support from the Amish for then-candidate Donald Trump, specifically in Ohio and Pennsylvania, two key swing states which also happen to have the largest Amish populations.

Given the importance of religious values to the Amish, I was skeptical at the time that Amish would support Trump, who did not present himself as a devout man.

This contrasted with the more publicly religious George W. Bush, who Amish did support to a degree, particularly in 2004.

However since then I have noticed pockets of real enthusiasm for Donald Trump. There are several examples in this article:

They might be an odd pairing — the brash and extravagant billionaire president and the humble Amish — but they enjoy a kinship in their Christian faith and work ethic, the Amish visitors told The Washington Times.

“He is a common man just like me and everybody else — very common, very friendly. He called us friends when we walked in there,” said Levi Miller, 56, an Amish farmer from Ohio. “It gets people excited that we have somebody in there who is not afraid to talk about Jesus Christ.”

That statement seems to conflict with the idea that Trump is not a devoutly religious person. Do Amish view him differently than the popular perception?

The Amish men said they do not harbor any misconception that Mr. Trump is an overly religious man, but they said he shared their Christian ethos and was moving the country in the right direction.

The strong economy has also played a role in the enthusiasm some feel:

Mr. Miller said the Amish experience the good economic times that Mr. Trump has ushered in, and many will back him in 2020.

“What we see happening at home. Everybody is upbeat. The stock market, everything is up — the economy, the jobs are available,” he said. “The only thing that’s [difficult] about it is you can’t get anybody to work for you. Everybody is working.”

I think that the Amish respect Trump’s business orientation and see him as hardworking, two things that would especially resonate with Amish businesspeople (who seem to comprise the majority of this eight-person delegation). They appreciate the strong economy of the last several years.

Additionally, while he may not be “overly religious”, the Amish see his actions in office as, at the least, not infringing on freedom of religion and issues important to Christians, and at best, supportive of them.

Vice President Pence, who is more outwardly religious, probably helps this perception to some degree.

While it’s not uncommon for Amish to make sightseeing visits to Washington, D.C., it’s not everyday that they come for a visit like this.

According to the article, this was the only time anyone could recall Amish having an Oval Office reception.

However, I found it interesting that President Woodrow Wilson hosted an Amish minister for prayer during World War I. 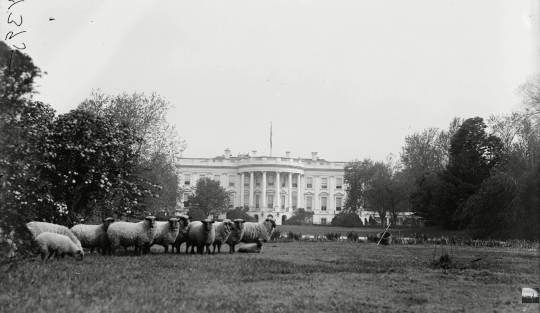 As a side note, I just learned that Wilson kept a flock of sheep to “mow” the White House lawn. I’d bet Amish of the era would have liked that approach. Sheep can often be seen keeping Amish schoolyards well-trimmed.

The last thing I’ll note here is that I can’t find any photos of this visit. None are included with the article.

Apparently President Trump “shooed away” the press as the Amish arrived. It sounds like the Amish guests appreciated that.