Chris Gingerich, 47, is a member of North Carolina’s sole Swartzentruber Amish community. A writer for AL.com met Chris and his wife Iva, along with 2 of their 13 children, at the Amtrak station in Birmingham, Alabama. Writer Greg Garrison managed to have a nice conversation with Chris, which he shares in an article for the site.

This is a neat article for a few reasons. One is that Amtrak and Greyhound stations are the rare places where you’ll find Amish in cities, far from any Amish settlement. There are no Amish communities for over 100 miles in any direction from Birmingham.

Plainer Amish groups in particular, like the Swartzentruber Amish, who don’t hire vans or other sorts of Amish taxis, use this mode of transport when they need to go some distance. So do Amish youth on trips out West.

Chris and his family happened to be returning from the community in Pontotoc County, Mississippi, where they have relatives. They moved to North Carolina two years ago from the community at Ethridge, Tennessee. “It was getting so crowded in Ethridge,” he explains. “I just like the mountains, and there’s no mountains in Ethridge.”

It seems Chris and Greg had a wide-ranging discussion. Chris shares his opinion on smartphones: “I consider that the most worldly thing you can have,” he says. He’s not the only one.

In 2003, Chris was rear-ended by a mini-van, going at full speed, while driving his buggy in Mississippi. He was hospitalized six weeks, out of work for eight months, and calls it “a miracle” that he survived. The driver was distracted by her children. “I don’t blame her,” says the Amishman. “I make mistakes myself.”

About different faiths, Chris says: “There are horse and buggy Amish, and there are Amish with cars. The name don’t tell you what they are. We’re not all alike. We’re still human.”

The NC Swartzentruber community was founded in 2014. There are currently 19 families. I had planned to visit this community last month, but decided to shelve that trip for when I’ll have a bit more time, likely next month. Maybe I will bump into Chris and tell him I read a bit about him already.

Finally, the last thing I found interesting here was the photo which accompanies the article. This is Chris and his 14-year-old daughter Amelia: 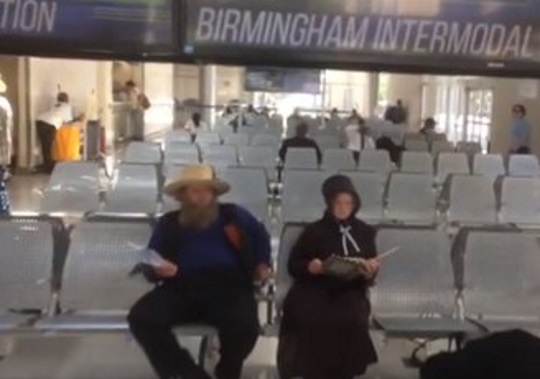 As you can see it is blurred so facial features are not recognizable, but looks like the author took it face on. Maybe that was the stipulation they agreed to. Amish are not always as strict about photos as we think.