Each year the Amish at St. Ignatius, Montana hold an auction to support their local school.

ST. IGNATIUS – Rain clouds opened up for a few minutes during the Amish community’s annual auction, held on Saturday, making a pile of watermelons glisten before they were sold to the highest bidders.

“The rain is great; it hasn’t run anyone off,” said Leroy Miller, one of the event volunteers.

The auction was held in a field in front of the one-room schoolhouse on Foothill Road where children from the Amish community attend. Miller said the auction brings in about $30,000 on average to support the school.

Where does the money go?

Funds are used for school supplies such as books and pencils as well as to purchase the wood used to heat the building. Two teachers are also on the payroll.

During the last school year, auction proceeds were used to install a public water system. “We had to put in a new well using state regulations because the building is used as a school, church and community center,” he said. Miller added that the project created a “huge cost” for the school, which is funding by the auction and community contributions.

This is another community which does something unusual as far as church – using a separate dedicated building for services (Amish typically hold church on a rotating basis at members’ homes, in basements, shop buildings or barns). St. Ignatius is a New Order Amish settlement.

This also brings to mind another recent story – on the Colorado Amish community planning to build a multi-purpose community center, to be used for both church events and auctions. 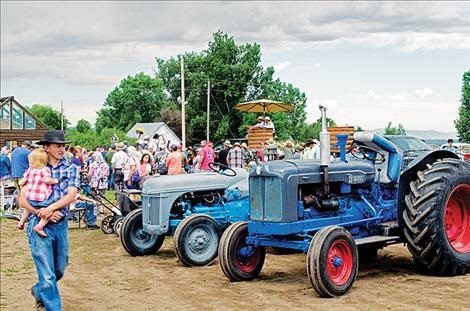 The St. Ignatius event had three simultaneous auctions running all day long. Quilts, furniture, tractors, tools, and yes, watermelons were among the items powering this fundraiser.

We don’t see too much on the Amish in Montana in the news, so it’s nice to get the occasional report like this. You also hear about school benefit auctions often, but not often with a breakdown of what the funds are used for. So that was also neat to see.