We don’t often hear much on the Amish in Colorado, though there are a handful of Amish in the state, spread across four communities.

But a recent snippet in the Conejos County Citizen brings word of the La Jara Amish settlement’s unusual plan…to build a meeting hall for community events:

CONEJOS COUNTY — The La Jara Old Order Amish Church received permission for a needed structure June 6 as the Conejos Board of County Commissioners (BOCC) approved a special use review for a reception/meeting hall.

I found this worth sharing for a couple of reasons – 1) news on Colorado Amish is infrequent, given their small population well off the beaten trail, and 2) Amish don’t typically build meeting halls, usually using their own pre-existing structures (shops, barns, basements) for community functions. 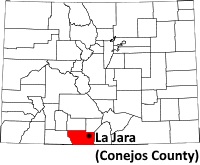 While there are several instances of Amish who do have meetinghouses for church services (Somerset County, PA; Oakland, MD; Unity, ME), this proposed hall appears to be an all-purpose structure for not only church religious functions but business functions as well (auctions and fundraising dinners).

Although regular church service is not mentioned in the article as one of the planned functions, perhaps the new building will take on that role as well.

Amish in the West tend to do things a bit differently than Amish in the longer-established eastern communities, which I’ve always thought is due to having to adapt to different local conditions than are typical in the East (climate, economy, etc).

That might take the form of different occupations or technology use (for instance, use of tractors in the fields in Kansas and Oklahoma, or Amish working in various forms of logging in Montana or as migrant workers on Texas farms).

I’ve also thought that being far-flung, well away from other Amish communities, might inspire a spirit of doing things a little differently (or perhaps those locations simply attract those types of people). While it cuts against the Amish “norm”, building an all-purpose meetinghouse might just be another example of that.