Two Runaway Buggies In The Past 3 Days

From time to time runaway Amish buggies make news, though it’s not something you come across often. However the past several days saw two such incidents reported.

Luckily, no one was hurt in either case. But runaway horses have caused severe accidents in the past. The second incident in particular seems like it could have been especially bad. More on that below.

Here’s the first, which happened in Ephrata in Lancaster County on Friday. From Fox 43:

Police believe the horse and buggy were waiting outside a Sharp Shopper store in Clay Township when the horse got free of its tether and ran off.

No one was inside the buggy at the time, police say.

The horse ran free for about 1.4 miles, dragging the buggy behind it, police say. The buggy struck two parked cars, causing minor cosmetic damage, according to police.

On Sunday in upstate New York, a potentially more deadly situation occurred when a driverless buggy got loose and headed the wrong way on an interstate highway. What made this worse was that it occurred at around 10 in the evening. 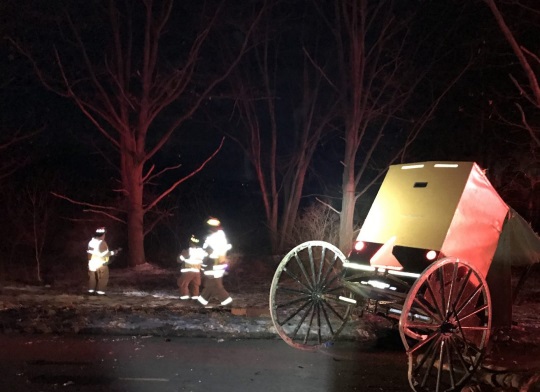 From the Jamestown Post-Journal:

KENNEDY — An unoccupied Amish buggy that was traveling the wrong way on Interstate 86 was struck by a semi tractor-trailer Sunday, the New York State Police said.

County dispatch had received several calls around 10 p.m. of the buggy in the eastbound lane of the interstate near the Kennedy exit.

According to Capt. Eric Balon of the New York State Police, the buggy was traveling westbound in the eastbound lane when a 2014 Volvo semi, driven by 57-year-old Kevin Jacobs of Louisville, Kentucky, struck the horse head-on. The horse was killed in the collision.

The owner, 44-year-old Emanuel Kurtz of Mud Creek Road, Kennedy, told troopers that the horse had run off with the buggy before he could get the buggy secured.

These incidents remind us that although Amish buggies usually come out on the losing end of highway accidents, they do present their own threat, especially in cases when horses bolt.

In one incident in 2017, a runaway horse pulled its buggy for 10 miles before being stopped, though luckily without causing anyone harm. That’s not always the case. A woman in Pennsylvania suffered a severe brain injury when an Amish horse got loose and struck the van she was driving in 2013. And in 2016 a driver was killed in Wisconsin when a runaway horse-and-buggy struck his car.

Accidents happen and this is not a call to get horses and buggies off the road. It’s just a reminder that horses are animals and even though they may be well-trained, some can behave unpredictably.

Horses don’t come out of a factory all running the same. Some need more training than others, and they have different temperaments. “You still always have wilder horses than some,” said one Amish woman in a WGAL video report on the 2013 accident. “And some that just don’t like to stop at stop signs.” It follows that it’s the horse-and-buggy driver’s responsibility to ensure road safety by driving road-worthy horses.

Were the horses in these incidents reliable? Or was it just a freak occurrence – a case of instinct or fear kicking in that is possible anytime it’s an animal powering your vehicle and not a machine?

There is no “road horse certification” requirement that I know of, and I don’t expect there will be. So this is something the Amish and other horse-and-buggy drivers have to continue to manage on their own.

For the most part, that seems to be working, even though there is always the possibility of an animal behaving in an unexpected way. It seems buggy drivers should be able to minimize that – by using their good judgment to drive only horses that they can reliably control on the road.