Amish, and religion, in court 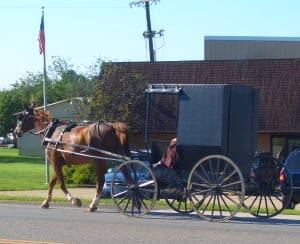 Three high-profile cases involving Amish are happening right now.  When Amish are involved in legal disputes, religious arguments tend to come up.  But is it always valid to invoke religion?

To take one example, Sam Mullett, leader of the Bergholz beard-cutting group, claimed authorities shouldn’t be involved in what was a religious issue.

To follow up on this story, claims about the Bergholz group seem to become more bizarre as time passes.  Now there are warnings of a possible Jonestown-like mass suicide outcome, as well as stories of violence and other nasty things (brainwashing, beatings, “taking wives”) happening in Mullet’s clan.

Separating hearsay from fact is difficult, and as Mike of Primitive Christianity warned on another post, passing stories along can be dangerous.  But these claims are now getting louder play, and are coming not just from one person, as detailed in this recent major news article.

Five men have been arrested for the hair and beard cutting attacks.  Stories like the above certainly aren’t helping them in the court of public opinion.  The men’s lawyer has tried to start reversing that:

Their lawyer Andrew Hyde defended the men and said it was them paying their own legal bills and not Mullet, telling WKYC: ‘The five men I’ve met in this case are complete gentlemen with deeply founded Christian beliefs.

‘I think a lot of the fear-mongering is being done by others to try to show these gentlemen in a bad light.

‘The experience I’ve had with them would cause me no fear at all. I’d have them in my house tomorrow.’

It will be interesting to see to what degree religious arguments are made on their behalf in court.  And to what degree, if at all, they will be tolerated.

Monroe Beachy, an Ohio Amishman who ran a fund which lost roughly $17 million, was arrested last month and charged by federal authorities with defrauding his investors.

The case touches investors in 29 states, mainly Amish.  People were shocked something like this could happen in the Amish community, and the media quickly labeled him the “Amish Bernie Madoff”.

When this story emerged last summer, Beachy originally claimed bankruptcy.  Members of his community convinced him to try to retract the claim.

The big controversy then was that claiming bankruptcy, which means involving governmental authorities, is something Amish do not do.

They would sort things out themselves, they said, arguing that their religion compelled them to do so.  To no avail.  The retraction was rejected (also, I think, relevant: not all of Beachy’s investors were Amish).

Now religious arguments have returned.  Beachy wishes to enter a no-contest plea on religious grounds.  Apparently this is never done at this level of court.  It sounds like it will be rejected.

I’m not a legal scholar.  But “no contest” is technically not an admission of guilt, though apparently is treated about the same way as a guilty plea by the court.  One difference, as I understand it, is that this type of plea can prevent you being sued later for civil damages.

Amish in Kentucky have also given religious reasons for refusing to use the Slow Moving Vehicle triangle.  Following the sentencing to jail of 8 Amishmen in Graves County, Amishmen in Grayson County (about 150 miles northeast) are being prosecuted for the same.

“It’s basically a public safety issue,” said Grayson County Attorney Clay Ratley. “I respect their religion, I respect their beliefs, but at the same time, we have to follow the law.”

I don’t know to what degree county legal policy is shaped by state legal authorities.  But that is two county courts now that have gone ahead with prosecuting Amish in Kentucky.

Legal authorities in other states (Ohio, New York) have accommodated Amish who refuse the SMV triangle (a minority, mainly the Swartzentruber Amish).   Looks like Kentucky is not going to be on board here.

These sorts of cases bring out the stark contrast between Plain values and those of the majority culture.  The principle of community, as came up in the Beachy case, or non-conformity to the world, an element of the SMV case, are essential to Amish identity.  These values are rooted in religious belief.

When cases like these make the courts and the news, we are often seeing the more “extreme” examples of these values on display.   But even though most Amish don’t take non-conformity to the levels that, say, the Swartzentrubers do, the general principle is still shared by all Amish.

America is a tolerant place.  Most other countries do not have the same range of religious creeds or practical degree of acceptance we do.  But there are limits to that acceptance, and public values to some degree shape our legal system.

I think most would find Sam Mullet’s claims of religion justifying physical attacks out-of-bounds.  But what about these other, less clear cases?

Do we still have sympathy for religious arguments when it’s only a minority-segment-of-a-minority religion making them, or sometimes just a single individual?