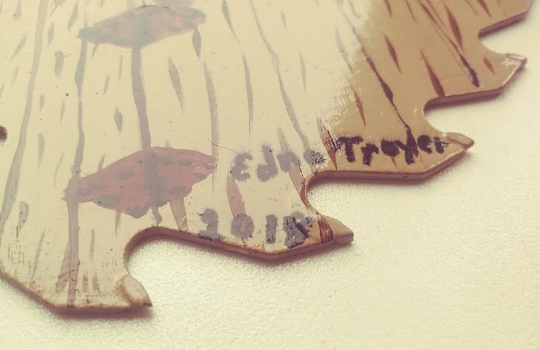 One of the more memorable experiences of my Holmes County visit was an early-morning stop at Indian Trail Harness Shop.

Rich Stevick and I were out for a day of visiting. This was our first stop of the day, and a random one (sometimes those are the best).

We noticed the place traveling up from Walnut Creek to an Amish acquaintance of Rich’s in Wayne County. Something about the combination of a harness shop and bookstore in one place caught our attention.

So we swung the car back around, parked and walked through the light drizzle into the shop. We were greeted by the owner’s son by the door. The place was heated by an open woodburning stove which emitted a warm crackling glow, very welcome in the chilly damp morning.

Robert Troyer runs a harness shop producing show-quality tack. He showed me some of his handiwork. These high-quality pieces are not your ordinary riding harness. They can fetch thousands of dollars and no doubt take a commensurate amount of labor to produce

Unfortunately I didn’t think to get any photos of this place so you’ll have to use your imagination (at least until my next visit).

The best I can do is a Google Maps image capture of the business, taken in 2013. It’s on State Route 515, right across from the sign marking the village of Trail. 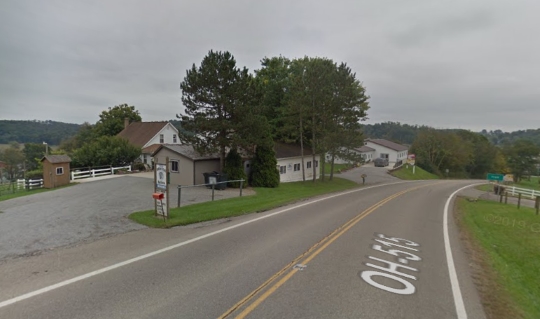 Rich recalled that he had actually previously visited the home when the Troyers happened to have a Western Tanager appearing on their property.

This bird is uncommon, or at least uncommon to the area, and drew attention from the area’s many birders. Rich described how the Troyers generously invited visitors hoping to spot the bird into their home.

Robert added the bookshop when the person who ran one across the road decided to get out of the book business.

Books are a small portion of the business, and the shop doesn’t compare in size to say, Raber’s Bookstore. But I still found a couple of titles of interest to take home.

At one point in our meeting, Rich inquired about Robert’s wife.

Edna suffered a spinal injury at age 18 when she fell down a hay hole in a barn. Though she eventually regained the ability to walk, she suffered from medical problems which worsened later in life.

Their church ended up permitting the couple to have a golf cart to make moving around easier, which Robert said helped a lot. At this stage she is apparently not able to get around much on her own.

This post is about circular saw art. But that didn’t come up until the very end of our half-hour visit. Having paid for my books and on the way out to the car, Robert mentioned that Edna did some painting – some of which was hanging behind the counter in the shop.

I picked out the piece below. I think it was about $25. Fittingly it’s a horse looking out of a stable, a piece Edna did in 2018. 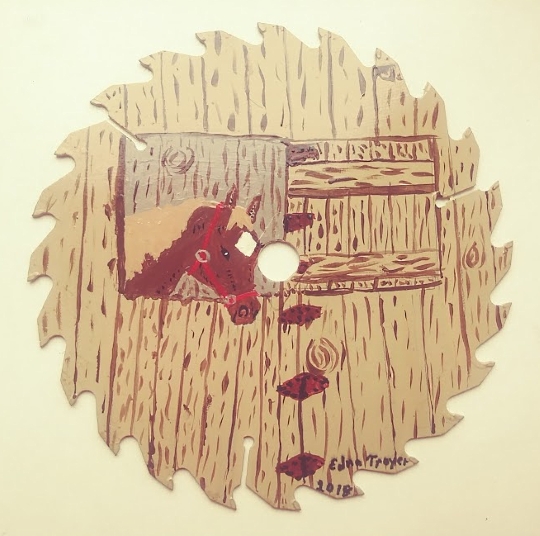 I had seen circular saw blade art before, but had never gotten any. This seemed like the perfect opportunity to take home something to remember our visit by. 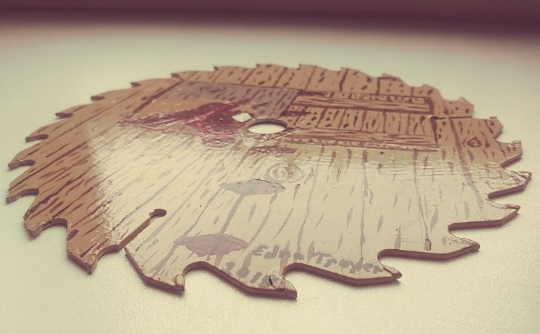 It’s now hanging in my kitchen. I’m glad Robert pointed it out to me. Though we didn’t get a chance to see Edna, I’m happy I have this piece of her work to brighten a corner of my home.

There is something about the contrast of this tool with the image it bears which I like. An implement designed for cutting the hardest of woods and the warm image of a hooved friend with a twinkle in its eye. 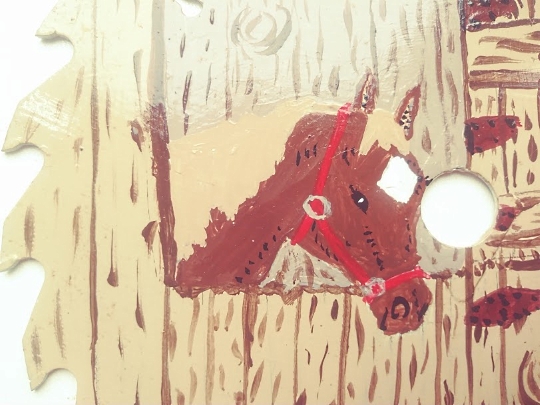 Robert is a warm man who kindly took some time out of his work to talk and share with us that morning. I’ll remember this unplanned visit, and will make the next one a planned one. 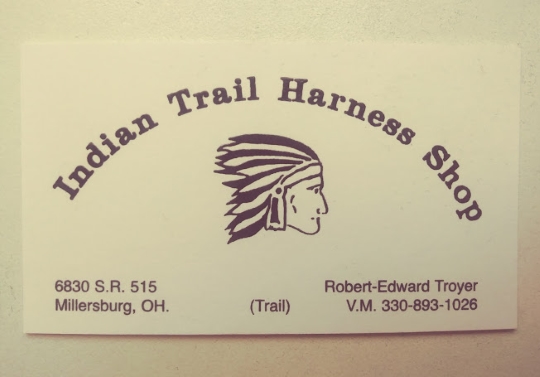 Here is the address of Robert’s place, should you wish to peruse his books, harness, or pick up some artwork by Edna:

If you stop by, tell Robert that Erik and Rich say hello!