I just Googled ‘amish news’ and it seems the Amish are getting some polarized coverage these days.

If they’re not being lauded as an example of how we should all be more forgiving, they are under fire as heartless puppy abusers.

Besides stating the obvious that we should look at the individual and not the whole, the Amish seem to exhibit certain general tendencies across the board.

I say forgiveness is one of them;  animal abuse generally is not. 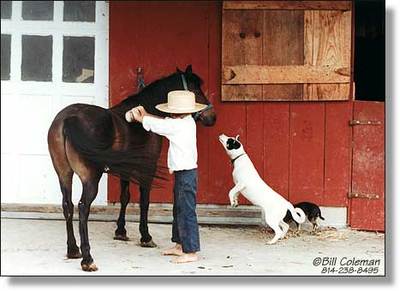 photo:  Bill Coleman
Amish have a long history of forgiveness and restraint in the face of persecution.  There are a number of famous stories of the Amish turning the other cheek, forgiving malicious attacks perpetrated against them.  One has been made into a movie.

The puppy mill issue is a hard one for me, because I’ve met a lot of puppy breeders, many of whom I took a liking to personally, mostly in Holmes County, Ohio or northern Indiana.  As I’ve said before, I’m no expert but mom and pups seemed perky and active and happy.

It’s tough because I want to believe that the Amish would care about the conditions their animals are kept in.  All evidence I’ve seen points to the idea that they generally do, whether it be the kid’s pony, family goat, or puppies.

And a lot of that just makes financial sense as well–after all, if your horse gets an infection from an improperly-fitted harness and you can’t use it for transportation and have to pay for the vet, that hits you square in the wallet.

I tend to believe this is a case of a few that are taking, okay, I don’t like saying this, but here goes, a more ‘backward’ view of how animals should be treated.

I also think pups are a hard issue because they are an animal that is humanized and adored by many in the general public.  After all, man’s best friend deserves better than your average cow, doesn’t it?

But, if anyone reads this(!) and has an opinion, I would love to hear how you see the issue.