I just returned late last night from a trip which took in four Amish communities in Ohio. Over the roughly three-and-a-half days I spent in the state there was a lot of visiting with Amish and English friends and acquaintances. I just did a count and besides things like auctions, shops and church gatherings, I was able to squeeze in sixteen visits over that time.  Some just a few minutes, others hours long.

One of the unplanned but happy visits was with a Swartzentruber Amishman I had met briefly in 2007. “Isaac” shears sheep for a living as well as running an orchard.  While in Holmes County over the weekend I was staying with Amish friends of a higher church group, and for some reason Isaac came up. It happened that my friends knew him and knew where he lived, so we decided to drop by while in the area on Sunday. 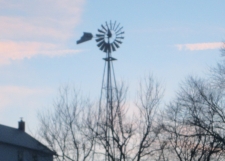 After knocking on one door of the twinned farmhouse, Isaac eventually emerged from behind another to join us on the front porch.  He invited us inside but we declined since there were already relatives there.  Isaac appeared glad to see us and seemed to recall our meeting on the Holmes County Trail late one summer evening 5 years previous.  The three of us had a good half-hour chat in the chilly air with traces of the still-unmelted snow on the lawn.

After our meeting in 2007 I wrote a short post about the impressive journey Isaac had made that day (I couldn’t believe it at the time).  He has to go some distance for some of his sheep-shearing clients.  You can read the post here.

The funny part of this story is that Isaac has also read this post. When I brought up meeting on the Trail he immediately said something about me doing a “write-up”. I wasn’t sure what he meant until I recalled writing this about 1,000 posts ago.

Someone with computer access Isaac knows apparently read it and recognized him, then printed out a copy. I guess the moral of the story is that news gets down the grapevine in unexpected ways!