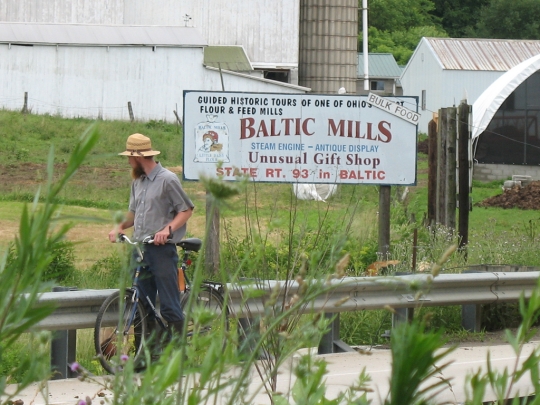 Who loves rankings? (everyone loves rankings)–today I offer my personal top-five favorite Amish settlements.  I hope you’ll indulge my self-indulgence for this one day (I’ve been wanting to do this post for a long time!).  I haven’t been everywhere, but of the 17-or-so communities I’ve visited, these are the ones I would most readily revisit (and do when I can), and why.

1.Daviess County, Indiana–I really love the Amish people down in Daviess County.  I love how the settlement feels well off the beaten path, with a minimal tourist industry for a fairly large collection of Amish (toned-down compared to Nappanee, similar-sized, on the opposite end of the state).  I loved learning people’s nicknames, which was super-important with such high-naming-homogeneity (85% of the people here share just six last names).  I got my first taste of Amish peanut butter and first invitation to church here, unsolicited.  Very friendly folks.  And an odd southern twang to the accent makes a Daviess Amishman easy to spot anywhere outside the settlement.

2.Arthur, Illinois– the first Amish settlement I ever happened upon.  That’s probably a big part of the reason it’s number two.  Arthur is in many ways a classic Amish community–it’s of a size where nearly everyone still sort-of knows everyone else, it still has a fair percentage of farmers yet has embraced the idea of home-based businesses (wood shops flourish here), and has a fairly uniform Ordnung across the settlement.  Like the Kalona settlement in Iowa, it is centered around a quaint, smallish town that sort of tries to rev up a tourist industry but doesn’t quite get there.  All the better for the atmosphere.  An interesting fact about the Arthur Amish and vehicles: for a period of time beginning in the 1950s, men in the community acquired driver’s licenses and drove for work-related matters, a practice which later dwindled (see Amish Enterprise:  From Plows to Profits, Donald Kraybill and Steven Nolt, p. 234).

3.Holmes County, Ohio– this would be number one but for nostalgic reasons giving the top two spots to Arthur and Daviess.  Holmes County is in my opinion the most scenically beautiful and interesting of all settlements, with its diversity of Amish population and hilly rural setting.  It’s touristy, but nothing like Lancaster.  I probably know more Amish, better, here than anywhere else.  This is where they broke me in, after all.

4.New Wilmington, Pennsylvania–I only visited here a day and an evening, but loved it.  Blue doors, brown buggies.

5.Allen County, Indiana– A Swiss Amish settlement that is starting to butt heads with a major urban area.  Has an interesting charm to it, due to its various ‘quirks’.  The Allen County Amish are a bit more gruff than those in, say, Daviess County or Elkhart/Lagrange, a bit more wary of outsiders.  When you get past the somewhat aloof exterior there are some very nice folks here.  The Amish in Allen County only drive open-top buggies and heavily favor building with brick.  The settlement has a wealthy feel to it due to that.  It doesn’t seem to be a facade.  The construction business has done very well here.  My books also did very well here.

In Allen County, there seems to be an odd mix of rules. Most homes have indoor bathrooms, while a significant number of folks have stuck with outdoor privies.  Yet cellphones are prominent.  English is creeping in, perhaps a bit too close for comfort.  But there is definitely a conservative streak here.  These Amish have close ties to the very conservative Swiss group in Adams County, just on the other side of Fort Wayne.

Disclaimer: My comments here are mostly superficial and done in good fun.  I’ve met great folks and enjoyed my time pretty much everywhere I’ve been in Amish America.

But I wonder, what are your favorite Amish settlements and why?