I’m still picking the splinters out of my hands this morning and counting up the nicks and scratches on my arms.

The Amish broke a city boy in yesterday.

But it was only about three and a half hours, so I guess they went easy on me.

Hay is ‘made’ in groups.  I think I counted ten of us yesterday–two Amish men, three teen boys, a pre-teen girl, two more boys aged about five and nine, and rounding it out, a little three-year-old along for the ride with her daddy, clinging to his shirttails like reigns as papa worked the real reigns hitched to the two lumbering Belgian workhorses.

This was the last stage of the haymaking process–the owner had already taken care of the ‘hard part’, cutting the hay and baling it in rectangular chunks.  Our job was to chuck and stack the bales onto the fifteen-foot flat wagon as it trundled slowly along the side of the pasture hill. 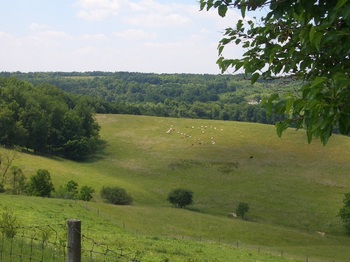 We then took each load of about 50 bales up to the barn where we stacked them to the ceiling among a swirling storm of dust and particles.  It would be pretty nasty if you had allergies.

Hay is for horses, and this cutting along with one, possibly two more, will feed the owner’s steeds through the winter.

It took four loads to clear the field this time.  The reward for each load was a swig of icy water from the community thermos.

The last time through, I got the call.

‘You know I don’t have my license for this’ I warned.

Despite my lack of certification, they let me give it a go, and I was amazed at how easily the massive beasts responded to the slight tugs and verbal commands.

‘We’ll have to check if you were drinking’ replied ‘Eli’.

After knocking out Eli’s field, we headed to the neighbors across the valley, taking the hay wagon off-road through some fields and over hills.  At one point we went across a particularly bumpy stream bed.

‘The ride of your life!’ Eli called back to me.

At the second field, we had to deal with a much steeper hill on the way up to the barn, and the two Belgians proceeded to give out of gas near the top.  One of the teens grabbed a chunk of concrete and stuck it behind a wheel.  ‘Amish brake’ he giggled.

The owner of this pasture, ‘Jacob’, quickly arrived with a triplet of feisty haflingers to come to the stranded Belgians’ rescue.  We quickly offloaded half of the bales onto his wagon and made it the rest of the way.

After finishing Jacob’s field–a little bit of sport, as we took turns dunking and shooting around the clunky hoop hung up in Jacob’s barn.

‘I didn’t realize you didn’t understand Dutch’ said Jacob, referring to the fact that the whole crowd, which had inflated to about 16 participants by the time we worked Jacob’s field, had been chattering away in the Amish dialect the whole time.

‘Well I understood those horses were pretty tired!’ I replied, with everybody cracking up.

And me too–Eli had warned me that I would ‘discover new joints tomorrow’ and I think he was right.