Mose Smucker on being Amish in public

My friend Mose Smucker was in the news over the weekend. Mose is an Amish father of 8 (and grandfather of more) who currently runs a meat shop and sandwich stand at bustling Reading Terminal Market in downtown Philadelphia (grab a sandwich from Mose if you’re ever in the neighborhood, if he’s not around his daughters are often there running the show). 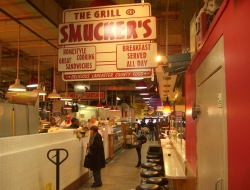 Mose used to run Smucker’s Harness Shop in Churchtown in Lancaster County.  This gave Mose some media exposure in the 1990s when publications like Forbes and Wired wrote articles on his business.

Mose is a supporter of the Nicholas Stoltzfus House project, which we’ve covered here a few times in the past. Mose will be the auctioneer for the 10th edition of the annual benefit auction for the house, happening this weekend.

Mose talks about being Amish in the public eye as well as the importance of the Stoltzfus House in an article for the Reading Eagle:

It is a conundrum and as mysterious as faith.

“We have been despised and looked down upon at times for not going to war and going our own way, and other times put in awe because of acts of forgiveness (the tragedy at Nickel Mines, an example),” Smucker said. “Perceptions have changed, but we haven’t.”

But Smucker admitted the Amish are not perfect, simply because the goal of following individual conscience within a community can have its inherent human strains. There have been ruptures.

“But I hope this place (the Stoltzfus house and barn) will be a healing spot, to bring people of faith together in strength,” Smucker said.

The Stoltzfus House annual benefit auction is this Saturday, May 12. 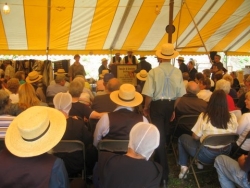 According to the website, “The auction serves to preserve the Nicholas Stoltzfus House and to build facilities to accommodate family gatherings and other visitors.”  Here are details if you’d like to attend:

The House is located in Wyomissing next to Berks County Parks along the Tulpehocken Creek which include trails, The Gruber Wagon Works, and a Union Canal museum. Exit Route 222 North from Reading, take Broadcasting Road east 1 half mile to the end, turn right, go about a mile to 1700 Tulpehocken Rd. Come for food, quilts, furniture, etc. For information call 717-367-3906, 610-373-6206 or email Paul Kurtz, psku@aol.com

Here’s a photo of construction of a barn to accompany the house.  The barn was raised in 2011 to house a heritage center, bathroom facilities and an apartment for caretakers. 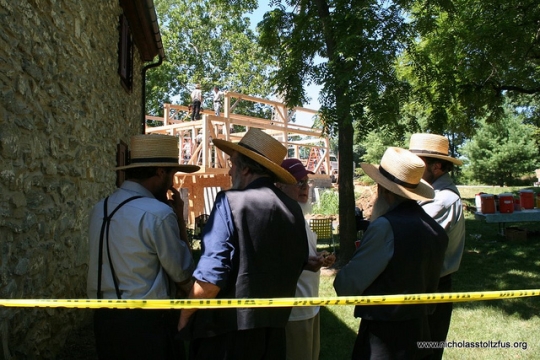