If you live anywhere in the Philadelphia-Baltimore-Washington DC corridor, you might have Amish nearer than you think–at least for a few days each week.  Amish market stands are found scattered across the Eastern corridor, bringing Plain life into the cities and suburbs of America’s largest metropolitan areas.

Market stands provide a pretty decent living for Amish.  A typical schedule would have an Amish family traveling to the stand Thursday through Saturday, though some may go more often.  Drives can be up to 2 hours one-way.  Amish sell everything from food to crafts to furniture.

While selling books in Lancaster County in 2007, I ran into more and more stand owners as I entered the eastern half of the settlement, perhaps reflecting the closer proximity to these large population centers. 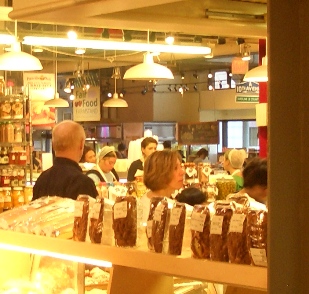 Amish under the lights at Reading Terminal Market in Philadelphia

There are in fact quite a few Pennsylvania Dutch stands.  An Amish friend (let’s call him “Aaron Miller“, whom you might recall from elsewhere on this blog) estimated there are up to about 30 Pennsylvania Dutch markets in the Philly-Baltimore-DC area, and around a dozen in the Philadelphia area.

Market trips can be a lot of fun.  Usually, they involve a good bit of driving around, eating fatty foods, and guzzling coffee.  Recently Aaron and I took a day and visited 4 Philadelphia-area markets.  Here’s a bit about what we found.

Our first visit was to the relatively new market at  Wyomissing in Reading, PA, opened in the last year or so.  Of the four we visited that day, this was probably the slowest, at least at the time we dropped by, and technically the furthest from Philadelphia itself.  Aaron said that though they’d been open a while, they were still working on getting established. 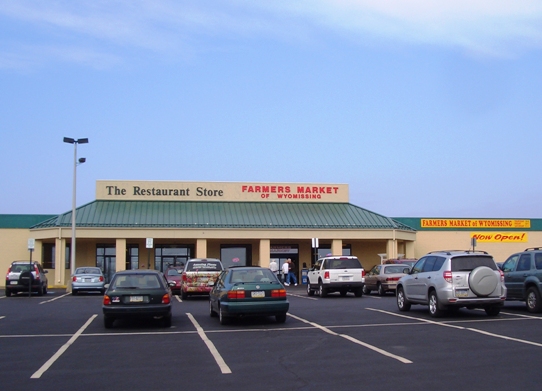 The market was quite nice inside, with probably a dozen or so businesses, mainly Amish (though they often refer to themselves as “Pennsylvania Dutch” markets, you’ll often see a mix of stand owners, with Amish, English, and Mennonites). 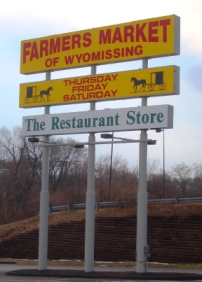 A giant sign shows the way to the Wyomissing Farmers’ Market

Pennsylvania Dutch markets typically have a standard array of businesses–a bakery, a deli stand, someone selling prepared foods such as baked chicken and meats, a pretzel seller, a coffee-donut stand, and so on.

Typically, Aaron explained, stand owners will try not to sell what others do in order to avoid direct competition within the market and to provide customers a wider range of goods.  Makes sense.

Aaron and I first stopped by a salad and dessert stand, belonging to a brother of another Amish friend.  He let me take this photo: 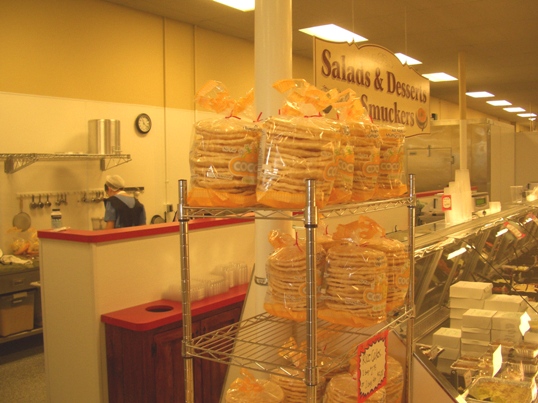 Amish girl working at the Wyomissing market. Rice cakes, seen in the foreground, are a healthy hit at Amish markets

Amish girls often work at market stands, being one of the common occupations available to them (along with teaching, waitressing, and serving as a hired girl in Amish or even non-Amish households).

Aaron, who runs a deli stand himself, was particularly interested in the neighboring cheese and meats stand, run by a Mennonite friend.  They had a chat while I mosied around and drank coffee #2 (coffee #1 was a portable road brew provided by the A-man himself).

Before leaving we picked up a popular snack at Amish markets–the Philly cheese steak pretzel log.  It was better than it probably sounds (“log” for me is usually a scary word when it comes to food).

Bristol was another newer market, which I can only describe as packed.  Aaron immediately noticed on pulling in that they were going to be perpetually short on parking.  In fact, they looked like they could use a parking deck.   Despite the full lot, somehow we snagged a V.I.P. spot right out front.  Maybe V.I.P. Aaron had something to do with that, I don’t know. 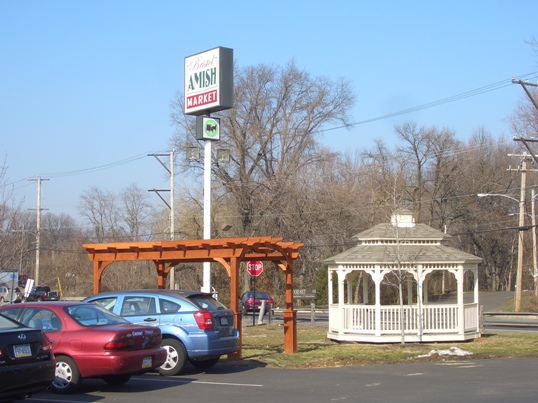 Bristol was just a quick visit.  It is a standard array of stands, with an additional furniture seller attached to the market (larger markets often have one, smaller markets stick more to food).  The thing that sticks out most in my mind at the Bristol market is the, let’s just say “creative”, men’s bathroom signs.  That’s all I’ll say on the matter, you’re just going to have to pay a visit and see what I mean for yourself.

Cottman Avenue was particularly interesting for me as it was the most run-down, for lack of a better word, Amish market I had ever seen.  This may reflect its location in a rougher part of Philadelphia.  While Bristol is more on the outskirts, at Cottman Avenue you are already getting well into the city.  The market is surrounded by seemingly endless row houses, corner stores, and mom-and-pop businesses. 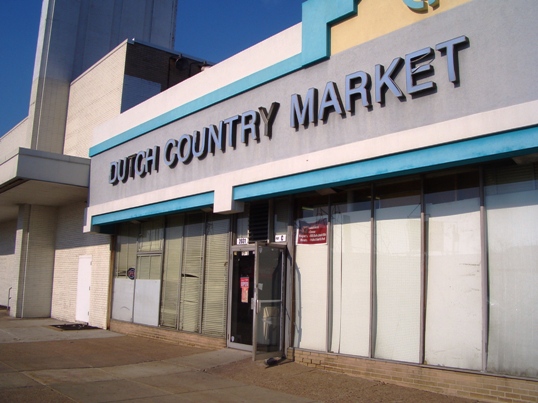 The market itself neighbors a massive Toys-R-Us outlet, and backs up onto the giant parking lot of a vacant strip mall.  Still, this little market hums, apparently doing a great business, despite the fact that it is also the smallest I’ve ever seen–only six stands crammed into a tiny floor space.

Here we spoke with another of Aaron’s friends, who runs a bakery stand.  We were gifted two pieces of cake for the road, Aaron cheesecake and me a super-rich chocolate cake (you’ve probably already guessed we weren’t going to be eating too many veggies that day). 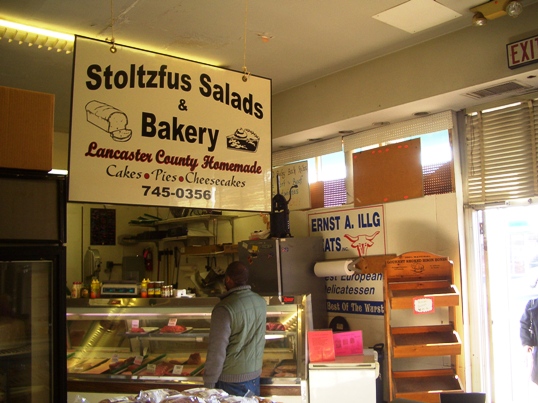 Apparently the Cottman Avenue market has a pretty serious clientele.  “Everyone that comes in the door leaves with something” explained Aaron’s friend.  People are there to shop, not to browse and hunt free samples (a challenge, Aaron admitted, at his own market stand).

The daddy of them all, Reading Terminal Market has a 100-plus-year history, with Amish coming to market for around the past 3 decades. 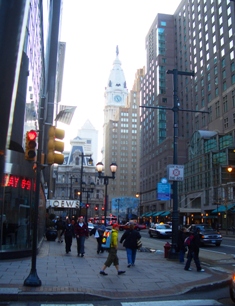 Reading Terminal is a swirl of sights and sounds, and a must-see for any visitor to downtown Philly.  The market is housed in the old train station terminal in the heart of the city.  The Amish contingent at the market in fact only makes up a minority of the roughly 85 stands.  The Amish are clustered in the Pennsylvania Dutch corner of the market.

The first challenge when arriving at Reading Terminal of course is parking your buggy, but luckily there are a number of parking decks in the area.  Aaron and I quickly located one just a few blocks away, dropped off the truck, and headed back to Reading Terminal.  But imagine my surprise when on the way out, Aaron mentioned to me that this was actually an Amish-owned parking deck.  Here he is pointing out the proof below: 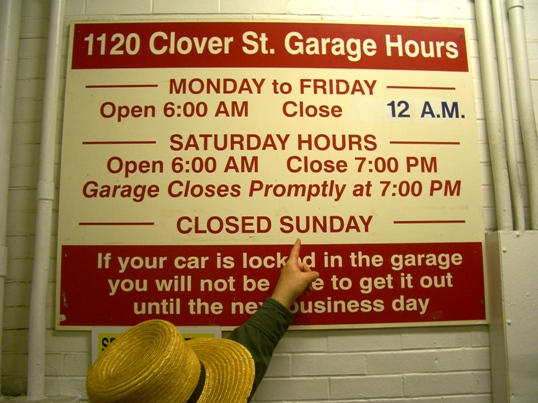 Aaron knows an Amish business when he sees one

So it seems the Amish tribe are even getting into the non-traditional businesses like parking decks.  What’s next, casinos? 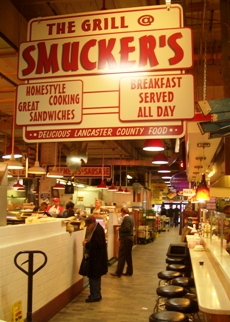 Once we got to the market, we beelined to the Amish section, and to the stand of Mose Smucker.  Some of you may remember Mose from around the time of my Amish business book‘s launch last year.  Mose was featured in a Time magazine story on Amish businesses.  Mose is still singing and laughing down at his meats and sandwich stand, The Grill @ Smucker’s (not sure if Mose has free wi-fi @ his stand yet).

On arrival Mose wasted no time in giving me a hard time, as he is known to do.  Mose wasn’t in perfect shape himself however.  Aaron and I noticed a limp, and Mose complained of a bum knee.  “Kicking too much butt” we discovered was the reason.  We advised him to lay off the butt-kicking for awhile but Mose wondered where would the fun be in that.  Fair enough. 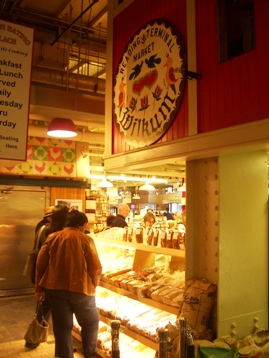 A bakery in the PA Dutch section of Reading Terminal

At Mose’s stand, I had coffee #5, while Aaron put away a meatball sandwich.  We had a visit to a few other of the Amish and Mennonite stands, including the bakery and pretzel stand.  And with that it was time to head out.

For future trips, Mose showed us where we could catch the SEPTA train,  (Or is that “SEPTIC train”?  Time for a new acronym, Southeastern Pennsylvania Transportation Authority!) just across the street from the markets, then shooed us off.

The trip back to Lancaster usually takes an hour and a half if you’ve got a clear road, but as is often the case on Friday evenings, things were backed up.  No chance of me falling asleep at the wheel, though.  Not with all that caffeine in my bloodstream.