Normally I drive an old, wheezing-but-somehow-still running red truck.  It’s got, let’s see, around 275,000 miles?  But like an old faithful dog or a worn-but-still-comfy-recliner, we’ve been through a lot together, and it’s just hard to get rid of it.  Abe calls it ‘the squeaky truck’ in reference to the telltale noise it makes, by which he can often tell I’m coming even while still well out of view.

Pulling in to the homestead this time around, Abe feigned disappointment on not hearing the friendly squeal, for we had driven Dad’s newer and more luxurious grey pickup this time.  The running joke of the visit, which I shamelessly pushed for as much mileage as possible, was that “we heard only grey-topped vehicles were allowed up here.”  Har-har.

I had a chance to visit my friends the Millers and got in a nice game of baseball with the boys.  A rogue guinea pig romped through the garden as we pitched and batted into the late evening.  I homered once and managed not to twist any joints running around the backyard.  Last time I tried to have fun with Amish kids–at another friend’s place, bouncing on the trampoline–I ended up wearing a back brace for a week.  So I’m counting this latest Amish athletic outing a resounding success. 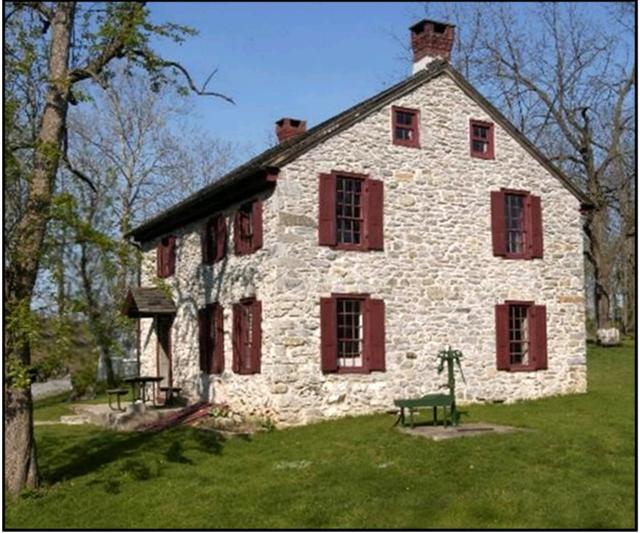 The dinner was held at Stoltzfus Meats in Intercourse, and featured two presentations, one on Nicholas Stoltzfus’s European background, the second on the history of the house and the ongoing renovation project.

The Preservation Committee is seeking to raise a sum of $300,000 to build a barn structure to accompany the house and serve as a museum, storehouse for artefacts, and living area for caretakers.  At one million descendants, that works out to around 33 cents a pop.  They’ll take more than that, of course, but if you happen to have Stoltzfus blood (or not) and would like to contribute, here you go: nicholasstoltzfus.com.