I enjoy looking at old postcards. I came across five interesting vintage Amish postcards on Flickr to share with you. Several of these are from the Lancaster County area. One or two have a touch of humor to them. Let’s have a look.

1. Greetings From The Pennsylvania Dutch Country

This is a card with classic “PA Dutch” iconogaphy and lettering. Lancaster Amish Country was already being marketed to the public way back in the 1930s, via tourist booklets and magazine articles. 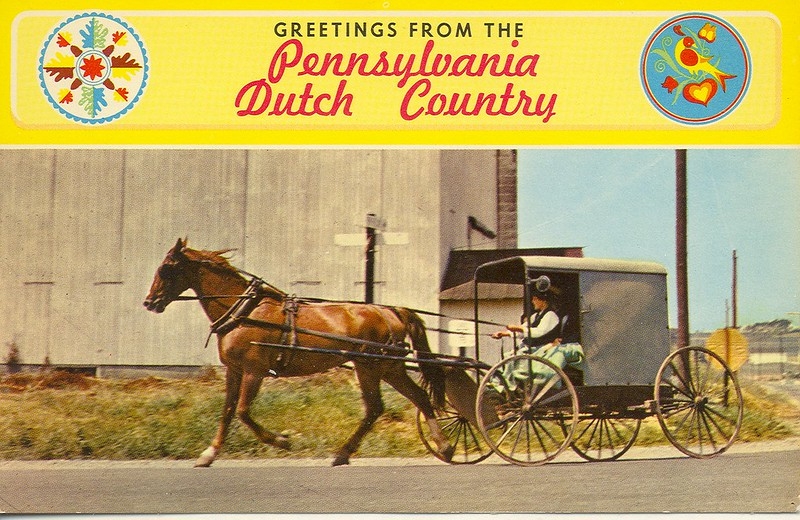 I’d say this card isn’t quite that old, but by the time it appeared the tourist industry had already gotten off to a strong start. The story of the growth of Amish tourism is told by Amish historian David Luthy in Chapter 7 of The Amish Struggle With Modernity.

This postcard is not dated, but if I had to guess, it looks to me like early-mid 1960s. Lancaster County wasn’t nearly so developed then, and the Amish population numbered tens of thousands fewer souls than it does today.

We see what appears to be an Amish buggy in this very old image. Topeka is one of the main “Amish towns” in the large northern Indiana settlement, where Amish residents of the area can be seen doing business at local shops, and a good number even live in town. 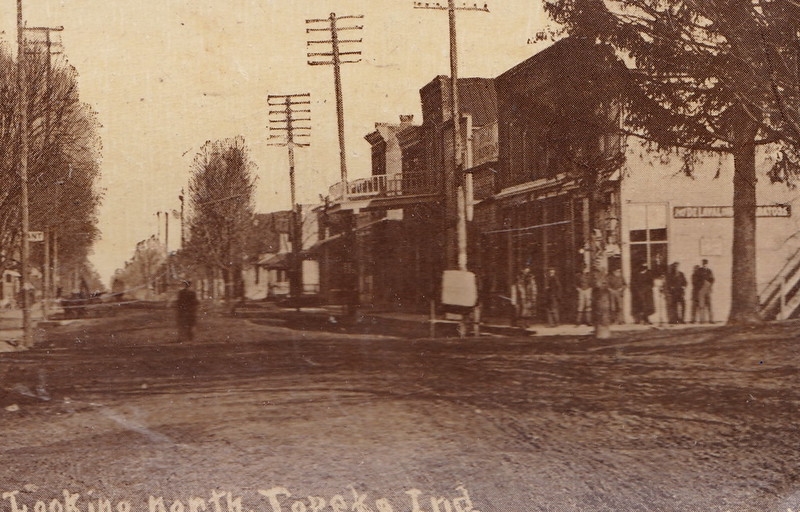 This is the view north from what looks like the main intersection of what would be Lake Street and Main Street. Today there is a hardware store on the southwest corner of this intersection, and a pharmacy and bulk food store on the north side of Lake Street. And the streets, of course, are paved now as well.

Notice there is no Slow Moving Vehicle safety triangle on the buggy. Those didn’t start becoming widely used until the 1960s and 70s. This scene is dated by the uploader as 1907.

A nice shot of ten Amish school boys lined up for a photo in what must be Lancaster County. Someone local with a better eye for buildings might be able to tell the location going by the brick structure in the background, which appears to be a church. 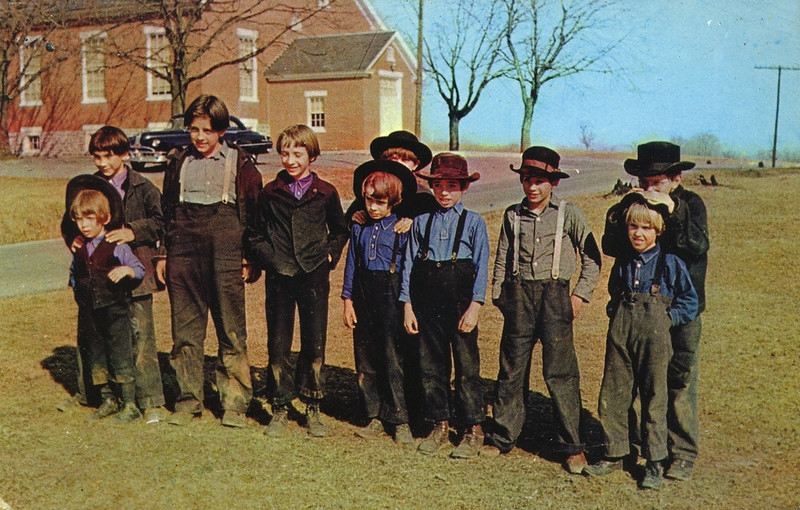 This is undated, but I suspect this photo is also circa 1960s. If so, that means these smiling kids are grandpas and great-grandpas today. I wonder if any remember this shot being taken, or are aware they happen to be on a vintage postcard.

4. How We Do Things At Orono, Michigan

This is what looks like could be an Amish farmer, with a wagon containing some “photoshopped” winter squash made to look extra-extra-large. A whimsical bit of agricultural braggadocio courtesy of the good folks of Orono, Michigan. How they do things is they grow ’em big. 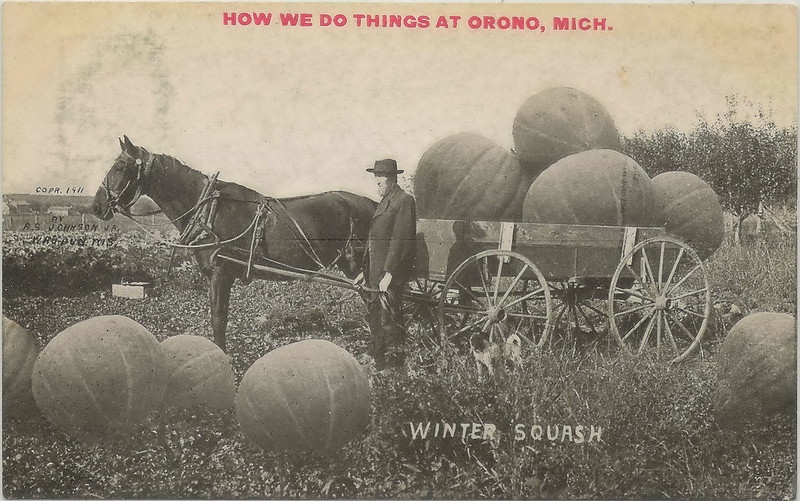 Orono is in Osceola County. That county has proven quite attractive for the Amish; there are half a dozen distinct Amish settlements there today. None of them would have been around when this photo was taken, however.

Also, checking David Luthy’s Settlements That Failed, there is no indication of an Amish community existing in the area at the time this was taken. So maybe the image was lifted from a different source by the creator, or maybe our proud squash farmer is not in fact Amish.

This card dates all the way back to 1912. As we see here, funny fake images are not a novelty of the internet era.

A father pulls the buggy over and stops for a break with his children on a Pennsylvania Turnpike overpass. Going by the color of the buggy (and what I can make out of the clothing), this actually looks like an Old Order Mennonite family, who use black-topped buggies, as opposed to the Amish gray seen in the top postcard. 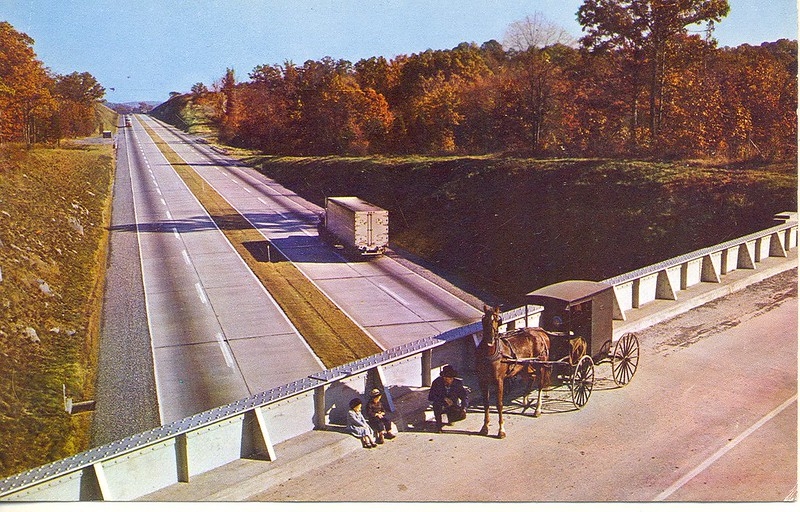 The Turnpike cuts across the northern section of Lancaster County, where the local Old Order or “Team” Mennonite population lives. Looking at a Google Map showing Turnpike overpasses, this might be in the area of Fivepointsville or Bowmansville.

“America’s First Superhighway” first opened in 1940, though the section passing through Lancaster County wasn’t ready until a decade later. What a contrast in transportation styles. An era when the world had really begun to accelerate thanks to superhighways and jetliners…while this Plain family keeps clopping along at the same pace.

One thing I wonder is how this photo was taken, given the high angle of the shot. A ladder? From atop a large truck? The photo is described as “circa 1960s“.