I’ve been getting some interesting photos and information from you guys and am really enjoying it–keep it coming!

On the ongoing topic of Amish phone booths, here is a photo of one from a Wisconsin Amish community, sent in by Eric: 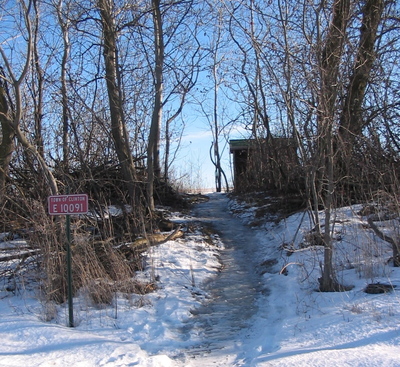 Eric says that phone booths in his area of Wisconsin tend to be larger than ones in places like Pennsylvania, with room for a bench and a small writing desk inside.  He also points out that the booths in his area are never found on Amish property, but always on a neighbors’.  That is interesting.  This one is apparently nearly invisible from the road during summer.

Eric also writes that an Amish family he buys wood from was busy harvesting ice on the day he sent this in.  It’s apparently a bad season for ice in his area–the ice on the ponds is apparently on the thin side.  Some Amish get ice in this way, or have it delivered by the ice-man.

Scott shares a picture of a new Amish buggy in Wayne County, Ohio: 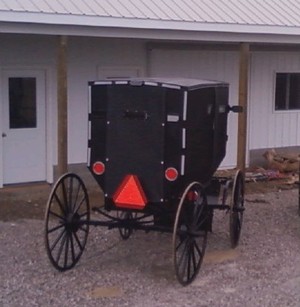 Scott points out that these newer buggies are more modern than those of yesteryear and incorporate conveniences such as LED lighting.  Lighting on buggies actually originated in some Amish communities pre-WWII, though a number of Amish groups still refuse any sort of electric illumination, using basic oil lamps when traveling in the evening.

And John points us to an article (no longer online) of a few weeks ago which included mention of an ‘Amish keynote speaker’, David Kline.  I was pleased to read this as I know David and his family and had a very enjoyable talk with him in Ohio last September.

David’s books–Great Possessions: An Amish Farmer’s Journal, and Scratching the Woodchuck: Nature on an Amish Farm are supposed to be good reads–though regrettably I haven’t had a chance to dig into them yet.  David is big on sustainable agriculture and spends a lot of time writing about it and discussing it.  He’s not your typical Amishman, as you might guess.

Thanks to everyone and feel free to send in anything of interest you find out there in Amish America to my email address, would love to hear about it.