This story at pennlive.com is a couple of weeks old, but since we’ve covered the Amish and exercise before, it’s worth circling back to.

Leroy Stoltzfus is a 22-year-old Amish man who did something remarkable–ran a marathon in an impressive 3 hours and 5 minutes–dressed in full Amish garb.

I am an amateur runner, and this sounds completely miserable to me. Running long distances is hard enough wearing the most comfortable gear and shoes. A look at Leroy’s photo brings home the point: 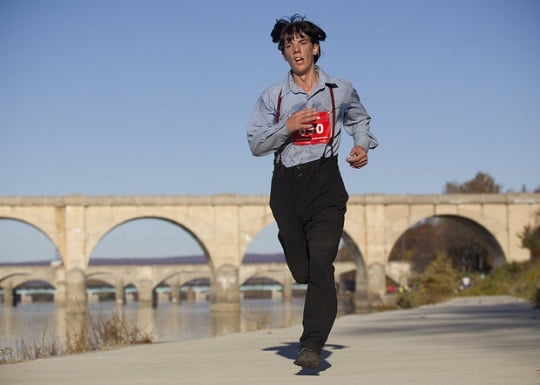 Those shoes hardly look the springiest. Another challenge in long-distance running is abrasions from the repetitive rubbing of clothing against your skin. I wouldn’t call the material typically used to make Amish clothes the most delicate. Ouch.

What’s also inspiring here is the story behind Leroy’s interest in running:

A few years ago, Stolzfus got “involved with some stuff” he said he shouldn’t have. His brother-in-law suggested he start running instead when he was tempted. He took the suggestion to heart, and went out for a run.

“I ran between two and three miles, and I thought ‘Wow, this is hard,'” he said. But he stuck with it.

The key to overcoming bad habits is often replacing them with good ones, isn’t it? Leroy has gotten increasingly better at running, even though his training is unconventional:

Stolzfus ran his first half marathon, the Bird in Hand Half Marathon in 2011, finishing in 1:42:51. In early 2012, he signed up for his first marathon, the Garden Spot Marathon, where he clocked in at 3:52:10. He kept running, his finishing times getting quicker and quicker.

The Harrisburg Marathon was nearly five minutes faster than his previous personal best.

Stolzfus is an evening runner, as he arrives at his job at a tobacco shop around 6 a.m. He spends most of his day lifting things around the store, and is on his feet a lot. He walks to and from the bus stop, at least a mile every day each way.

He doesn’t run every day. In fact, he said he isn’t like most runners.

“Sometimes, I don’t even get 10 miles in before a marathon,” he said. Most marathon training plans call for multiple double-digit runs.

However, Stolzfus is dedicated to speed work, logging laps around the track at F&M weekly with friends and his brother-in-law.

The Amish, particularly younger Amish people in the Lancaster County settlement, have had a connection with competitive running for a little while now.

In 2012 Runner’s World magazine featured a story on young Amish runners. Reader Anne, mother to a convert to the Amish, also shared her experience at the Bird-in-Hand half marathon.

I quite like how the article on Leroy ends. The young runner is asked how things have gone since being advised to pick up running: “Life is a whole lot better for me now.”