Here is a literal feel-good story. Amish teen Daniel Troyer (of Jamesport, MO) needs a heart transplant. His condition (cardiomyopathy) had made it difficult for him to do even basic tasks like eating.

He still needs a transplant – but a special implant has given him new energy and hope. From KCTV 5:

At 17-years old, Daniel Troyer suffers from cardiomyopathy. His heart is dying. Most patients like Daniel must endure long hospital stays while waiting for a donor, but Daniel is living a near-normal life.

“I mean, yeah, I have energy and I can pretty much do what I want,” said Daniel.

Two weeks ago, it was a very different story. Daniel could barely walk.

But, thanks to a new device at Children’s Mercy Hospital, he has a new lease on life.

The device is called the Heart Mate 3, it’s a Ventricular Assist Device or VAD.

“It removes the blood from his heart to pump it to his body, so his heart doesn’t have to do the work,” said Dr. David Sutcliffe.

Sutcliffe is the cardiologist at Children’s Mercy in charge of Daniel’s care.

“Not being able to breathe was just exhausting and even eating was a challenge for him. He was not doing well,” said Sutcliff.

“He was born with a genetic heart condition,” said Rose Troyer, Daniel’s mom.

It’s a condition Daniel’s struggled with his entire life, but Rose said her son has beat it for the most part.

“It wasn’t until this winter we noticed he was losing energy and he had more lightheaded episodes,” said Rose.

In May, a virus sent Daniel to the hospital. He underwent numerous treatments and medications, but nothing worked.

The improvement after the implant was dramatic:

“He’s able to take walks. He’s able to exercise, do physical therapy, kind of do everything in life,” said Sutcliffe.

“From the minute the device went in, his color changed,” said Rose. “Every day since has been for the better.”

This is yet another case that belies the idea that the Amish reject modern innovations. While the individual health care approach will vary, they do participate in modern medicine – both as beneficiaries, as in this case, or to help further medicine, as when they participate in health studies in areas like heart disease and secondhand smoke.

Sometimes people critique the Amish by calling them hypocrites, since they don’t become doctors and researchers themselves due to the custom of limited formal education. I think that’s off-base though. For one, it’s a broad and varied society we live in, with many different types of people taking up different roles. And for another, their willingness to participate in studies is to their credit. The fact that their communities are genetically atypical can lead to some real benefits for wider society – perhaps even in helping increase human longevity.

Back to Daniel’s story. There is a video featuring interviews with both of them at the KCTV5 link at top. You’ll see Daniel’s wearing English clothes. At 17 he’d be at Rumspringa age, and Jamesport is a pretty progressive community. That may also be why Rose had no problem speaking on camera: 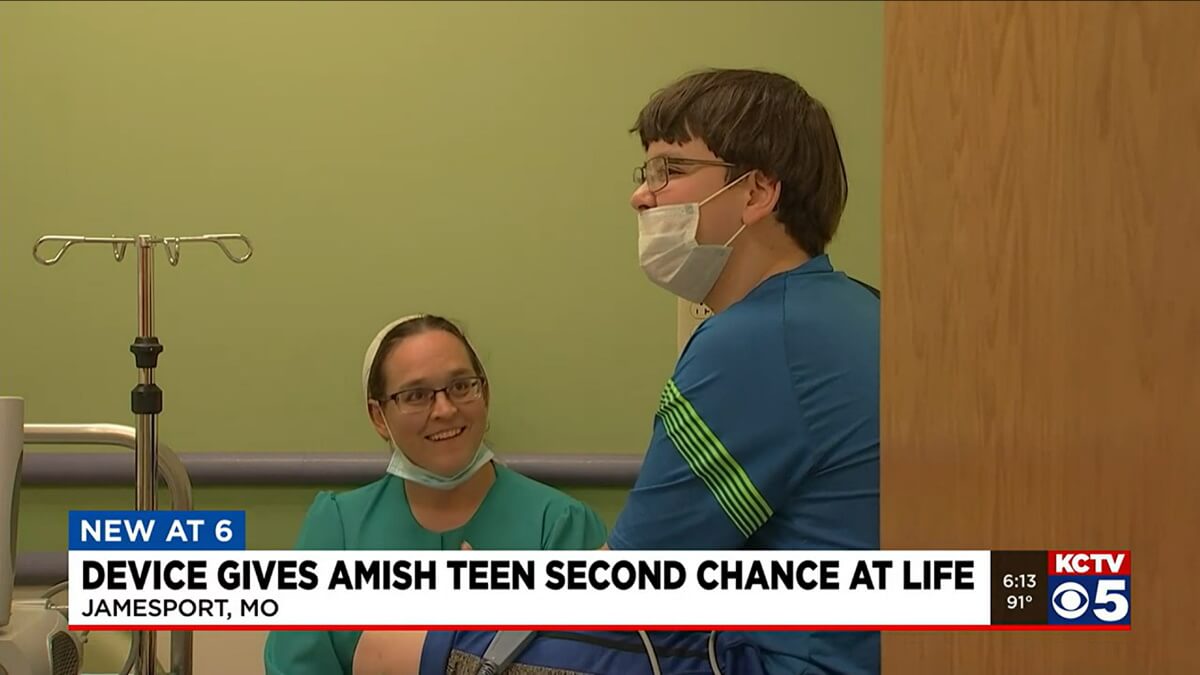 I found the entire thing quite uplifting to read. It ends with Daniel’s mother speaking confidently about their family’s future:

“We love going to the mountains and hiking as a family, and the beach in the summertime. We’re hoping to resume all those family activities after his transplant,” said Rose.