Amish Runners and the Bird-in-Hand Half-Marathon

I often take along my running shoes when I travel to Amish communities.  When you’re in the car for long hours and saddled up next to the table for many more, hitting the pavement for a jog becomes a basic necessity. 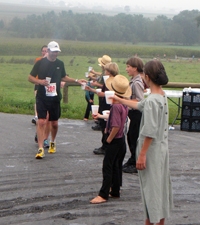 The scenic roads of Lancaster County are popular among recreational athletes.  In parts of the County there is almost a steady stream of runners and cyclists passing by in the warmer months.  With widespread asphalt surfacing and many corners of the county seeing relatively low road traffic, it’s no wonder.

Runner’s World features an article on Amish runners in the past month’s issue.  Trevor Dixon writes about full-moon runs in Lancaster County’s “Valley of No Lights”:

Last October I ran with Smucker, some of his Mennonite friends, and about 20 Amish. The Mennonites wore running shorts and running pants, and synthetic tops. The Amish men wore black pants held up with suspenders and long-sleeve, button-down shirts. Most were clean-shaven (Amish don’t grow beards until they marry, which is usually a few years after they formally join the church). The one woman in the group wore a long dress and a head scarf. I should note that they all wore running shoes. I should also note that we were running by the light of the moon.

Todd Weaver, another Mennonite, Terry Yoder, and a few others had started the full-moon runs in the fall of 2007. Smucker joined in 2008, and early the next year he brought the marathoning Amish man, and then that man brought a few of his friends. These days, the full-moon runs draw as many as 30 people, Mennonites, Amish, and English…

The discussion during the full-moon run was the same one that every group of runners I’ve ever joined has participated in: personal bests, upcoming races, business ups and downs, good-natured insults. A few of the faster Mennonites sped ahead the last mile, and when they got to the Bird-in-Hand Fire Station, doubled back to join the group.

“You can tell they’re Mennonites,” one of the Amish cracked, “they’re going the wrong way again.”

It sounds like these are mostly unmarried Amish youth, but maybe not all.  The Amish have a complicated relationship with sports, sanctioning some activities as upbuilding and a means of socialization (youth group volleyball games or schoolyard softball matches), but largely frowning on organized competitive sports.  As an essentially solo endeavor with potential for individual glory, long-distance running does not seem to fit the mold of Amish-approved athletic activities.

Dixon on the issue:

As more Amish race, though, and get faster, there are risks. No one wants a repeat of the softball ban.

It’s not something I’d previously noticed, but every Amish schoolhouse has a ball field next to it. Consequently, the Amish have for generations been really, really good at softball and baseball. So good, in fact, that some, in the past, were recruited to play on semipro teams. In the late 1940s and early 1950s, Smucker’s uncle, who was Old Order Amish, pitched semiprofessionally under an assumed name (his Amish catcher did the same). They didn’t want their parents or church elders to see their names in any stories or box scores in local papers. They weren’t sure either would approve. They were right to have worried.

Smucker’s uncle and his battery mate eventually retired without having been found out, but 15 years ago, some other young Amish men weren’t quite as careful, or quite as fortunate. They started playing in a number of leagues, and wearing uniforms, and after a while, it was apparently too much for the church elders to ignore. Whether it was too obvious a display of pride, or modernity, is not exactly clear. Kids can still play, but Amish church members in Lancaster County are now banned from playing softball and baseball.

Amish youth are also among the runners of the Bird-in-Hand half-marathon, mentioned in the Runner’s World piece.  This annual event started in 2010 and enjoys support from the local Amish community.

It’s a course like nothing you’ve ever experienced! Weaving around the famous Amish farmlands of Lancaster County, this is a course that challenges your body and refreshes your soul. Dotting the route are water stations staffed by Amish families, eager to offer you refreshment. And Amish one-room schoolhouses serve as your rest stops.

From a video on the site I learned that the half-marathon is one of a number of fundraisers for the Bird-in-Hand Volunteer Fire Company, 60% of whose members are Old Order Amish.

An “Amish Pasta Party” the day before provides loads of carbs for runners to pack away.  “Pace buggies” lead off the race, with “sag buggies” offering runners assistance. This year’s event takes place the weekend of September 7-8 (Fri-Sat), and also features a hot air balloon launch, a kid’s fun run, and a bonfire and s’mores jamboree.  I may need to get back on a training regimen (or at the least make plans to hit the s’mores party 😉 ).