Questions about the Amish dialect 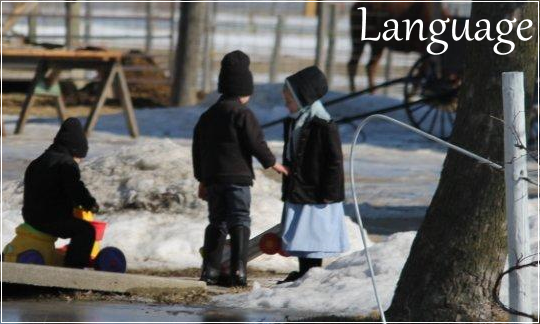 What language do the Amish speak?

Amish speak a dialect called Pennsylvania Dutch or Pennsylvania German. It is a German dialect which in its everyday usage often incorporates English words. The dialect is generally not written. It’s spoken in everyday conversation as the primary language of the home, business, and social interaction. Read more on the Amish dialect.

Why do Amish people call their language “Dutch?

It’s not what they speak in Holland.

True. Pennsylvania Dutch is not the Dutch spoken in the Netherlands, though you may have heard Amish people describing what they speak as “Dutch”.

The name of the dialect comes from the name given to the Pennsylvania Dutch people, a larger group of immigrants which included Amish and Mennonites but also many others of other religious persuasions. There are different theories as to why this group of people came to be known as “Dutch”.

Is the dialect the Amish speak the same in all communities? 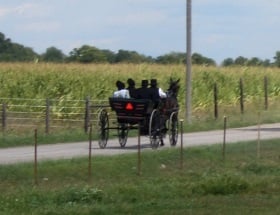 No. There are differences, for example, between the Pennsylvania Dutch spoken in Lancaster County and in Midwestern settlements like Holmes County, Ohio. Also, the Swiss Amish speak a different dialect which can be difficult for Pennsylvania Dutch speakers to understand.

When do Amish children learn English?

Typically when they enter the first grade, Amish children will get their first formal training in English. However, some Amish children may get exposure to the English language due to their parents’ occupations (eg, jobs involving contact with English clientele) or via non-Amish neighbors and visitors.

High German is considered the language of the church. It is not spoken in everyday usage, but Bibles and other religious books are printed and read in High German. Amish children have German lessons in school.

Do Amish speak English with an accent?

Usually. But it’s not an “Old English” or heavily German accent as it may be portrayed in fictional works, television programs or movies. The Amish accent can vary across settlements.

In some communities it involves a softening of syllables, such as the word “just” being pronounced more like “chust”. Amish may pronounce certain common words in an unusual manner, such as the word “favorite” being enunciated as “favo-right”. They may also use some unusual phrasings, such as “it wondered me”, instead of “I wondered”.

Some Amish accents are stronger than others, and Amish in different communities and situations will be more and less comfortable communicating in English. Generally, businesspeople who have a lot of exposure to non-Amish people tend to have higher language skills while Amish in plainer, more isolated settlements have weaker English abilities.

Can I learn Pennsylvania Dutch?

Yes. There are a number of resources available to help non-natives learn the language, including books, dictionaries, and at least one course. If you’re curious about the language, you can view some PA Dutch kitchen terms and similar-sounding words.

You can also hear PA Dutch being spoken by a variety of speakers at the University of Wisconsin’s Center for the Study of Upper Midwestern Cultures American Languages project.