I am working on a large Holmes County Amish post for later this week.  In the meantime a few preview photos and some recent news stories featuring Amish.

Holmes County as you probably know is the largest Amish community in Ohio, and along with Lancaster one of the two largest in America.

It’s interesting but not surprising that the Geauga County community (pronounced closer to “JAW-GA” than it is to “GEE-AH-OO-GAH”) to the north is not nearly as well-known as Holmes County, though it is now over 100 church districts in size. The Geauga settlement came about around 80 years after Holmes was founded, when Amish from Holmes County moved into the area.  The land was apparently considered poor for farming at the time.

When people visit Ohio and want to go to Amish Country, Geauga is overshadowed by Holmes County with its well-developed tourist industry.  Maybe the people in Geauga County are glad for Holmes County for this reason.  Or maybe some wouldn’t mind the tourist business 🙂

A few winter photos from Holmes County, courtesy of a reader who recently visited, with more to come soon. 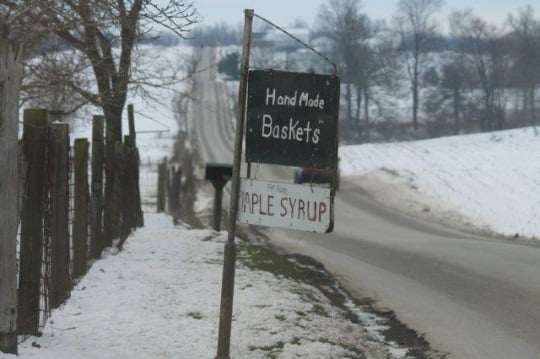 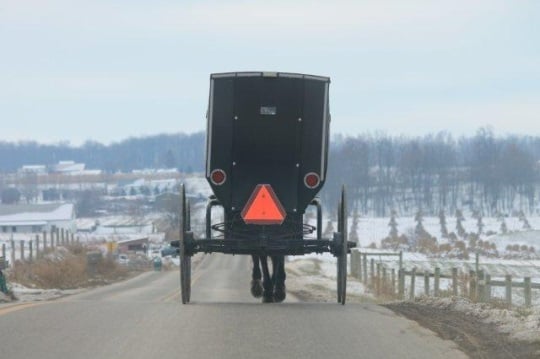 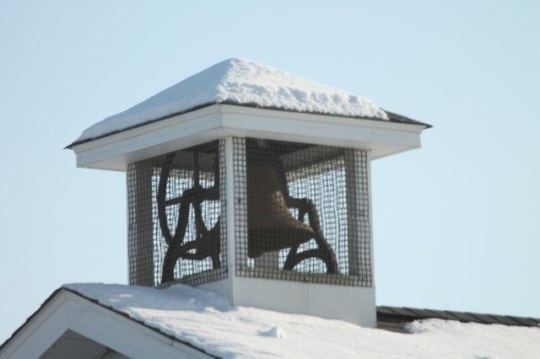 “Each year, there’s about $600 profit,” said Joe Mast, who is Amish and has organized the Amish Benefit Breakfasts since they started about three years ago.

Members of the Amish community only seek professional medical care when they aren’t comfortable treating an injury or illness themselves, Mast said.

“We started the breakfasts to help with school costs, but the costs of hospital stays have increased,” Mast said.

Given the price of hospital treatment, $600 doesn’t seem like much, but I suppose every bit counts.

Saloma Miller Furlong, author of Why I Left the Amish and the forthcoming Bonnet Strings: An Amish Woman’s Ties to Two Worlds, discusses her experience in an article for Mennonite World Review (no longer online).  Saloma grew up Amish in Geauga County and left the community as a young woman.

Saloma will also appear in the new PBS film on shunning.  Of the film, Saloma says “Not only do the Amish people talk about being left behind and the shunning … [but] there are those of us who talk about what you lose.”

Thirty-some Amish from the Nickel Mines area, including families of victims and teenage survivors, visited Newtown, Connecticut earlier this month, site of the Sandy Hook school shooting of late 2012.   From the Newtown Bee:

“We had different rooms at the church that were just set up for people who wanted private conversation, and others for larger groups [from Newtown] that met with a larger group from Nickel Mine,” said Rev Crebbin. “We just had the different rooms, and a loose schedule, to follow what people desired, and that’s just what they did.”

“I was very encouraged by it. I think we all were. It was a very good day,” said Rev Crebbin. “It was about two communities finding ways to support each other.”

In another story, a father whose daughter was killed in a December school shooting in Denver recently offered the shooter his forgiveness.